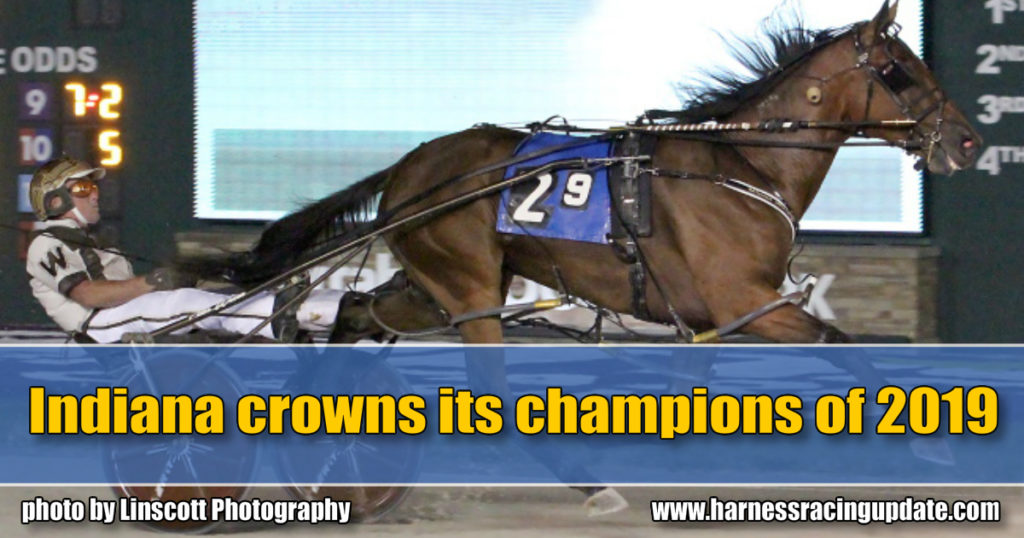 Indiana crowns its champions of 2019

The Hoosier State honored its best Saturday in Indianapolis.

The top Indiana performers from the 2019 pari-mutuel and fair circuits were honored Saturday night (Jan. 25) in downtown Indianapolis at the Indiana Roof Ballroom. Trace Tetrick and Jeff Cullipher repeated in the top driver and trainer categories, while Victory Hill Farm Inc. again received distinction as the state’s leading breeder. Freshman Odds On Osiris was tabbed Indiana Pacer of the Year, while sophomore filly Grand Swan took home the Trotter of the Year award.

It was another banner year for Tetrick, who reigned in his sixth straight Harrah’s Hoosier Park driving title, and eighth overall. He finished the 160-day meet with 328 wins and more than $4.4 million in purse earnings. Tetrick finished seventh in North America last season with 478 trips to the winner’s circle and just shy of $6 million in purses. Cullipher collected his third straight Harrah’s Hoosier Park training title on the strength of 108 victories and more than $1.7 million in earnings. His stable finished 12th nationally with 186 wins and $3.4 million in purse earnings in 2019. Tetrick and Cullipher teamed for several Indiana Sires Stakes scores with phenomenal freshman trotting colt TJ’s Top Pick, divisional champion with eight wins from 10 starts, $302,871 in earnings, and a 1:53.3 Hoosier Park track record.

Don Eash sent out 46 winners during the fair season and earned Fair Circuit Trainer of the Year, a status he has achieved several times. Joey Putnam, on the other hand, secured his first Fair Circuit Driver of the Year award. The son of Hoosier horseman Joe Putnam steered 61 winners over the summer and fall.

Odds On Osiris led all 2- and 3-year-old Indiana-sired pacers in Indiana earnings, leading to Pacer of the Year honors. The Rockin Image—Antigua Hanover gelding won seven of 10 starts for trainer Melanie Wrenn and Dana Parham’s Odds On Racing. Driven by Peter Wrenn, Odds On Osiris captured the Fox Stake, $270,000 Indiana Sires Stakes Super Final and $61,500 Madison County, and raced second in the $125,000 Elevation to finish the season with earnings of $343,895 and a 1:50.3 mark, a new Hoosier Park record for freshman gelding pacers.

Grand Swan captured 10 of 15 starts and accumulated earnings of $411,232 to garner Trotter of the Year honors. Trained and driven by LeWayne Miller, the Swan For All—Queen Mum sophomore is owned by the partnership of Grand Swan Racing, Go Fast Stable and Never 2 Late Stable. The filly won six Indiana Sires Stakes legs and the $270,000 Super Final, also annexing a $34,500 division of The Pegasus and $32,300 division of The Circle City. She finished a neck behind Evident Beauty in the $135,000 Moni Maker.

Rockin Image and Swan For All led all stallions in Indiana in 2019. A total of 55 starters represented Rockin Image in Indiana Sires Stakes competition, amassing earnings of $1.74 million to lead all pacing stallions last season. Besides Odds On Osiris, Rockin Image sired Super Final winners Rockin Nola and Priceless. Nationally, the son of Rocknroll Hanover sired 285 starters that collected 203 victories and $7.8 million in purses. A group of 53 starters sired by Swan For All banked $2.29 million in sires stakes purses to top all trotting stallions in 2019. Offspring claiming ISS Super Finals included Grand Swan, Swandre The Giant, TJ’s Top Pick and Rock Swan. Swan For All’s 2019 North American totals include 115 wins from 168 starters and purses of $6.27 million.

Victory Hill Farm Inc., which stands both Rockin Image and Swan For All, picked up yet another award as Large Breeder of the Year. Horses bred by Victory Hill earned $1.3 million in Indiana last season, and 91 starters combined to rake in $2.89 million nationally. Larry E. Miller Jr. was recognized as Small Breeder of the Year. Miller bred two horses that started in 2019, one of which was the aforementioned champion Grand Swan.

One of the more poignant moments of the evening took place during the Indiana Standardbred Hall of Fame’s induction of four new members. Jessica Barnes, Director of Racing and Breed Development for the Indiana Horse Racing Commission, inducted her late father-in-law, Harold Barnes. Harold was a third-generation horseman and former leading driver and trainer, the son of fellow Hall of Fame members Ed and Luella Barnes. Kay, his wife of 56 years, and other family members were on hand for the induction. Harold Barnes passed away November 10, 2019 at the age of 79.

Lynn Wilfong, who has actively participated in harness racing in the Hoosier State for more than six decades, also joined the hall of fame Saturday as one of its newest members. Wilfong has bred several Indiana Sires Stakes champions as well as top Illinois horses. He served at the helm of the local horseman’s association for more than a decade and helped lobby to bring pari-mutuel racing to the state.

Equine inductees Saturday evening included Hannelore Hanover and Freaky Feet Pete. Both retired competitors brought increased recognition to the Indiana breeding program while showcasing their talent on the Grand Circuit. Hannelore Hanover called it a career late last year as a triple millionaire, former Horse of the Year, and one of the greatest trotters in the history of the sport. She earned two Breeders Crown titles, one while beating her male counterparts, and a slew of stakes victories. Freaky Feet Pete earned much of his $1.6 million bankroll competing for his late breeder and trainer, Larry Rheinheimer. The Rockin Image colt won a Breeders Crown final in 2015 and was part of the “Big Three” that included fellow Indiana-sired pacers Wiggle It Jiggleit and Always B Miki.