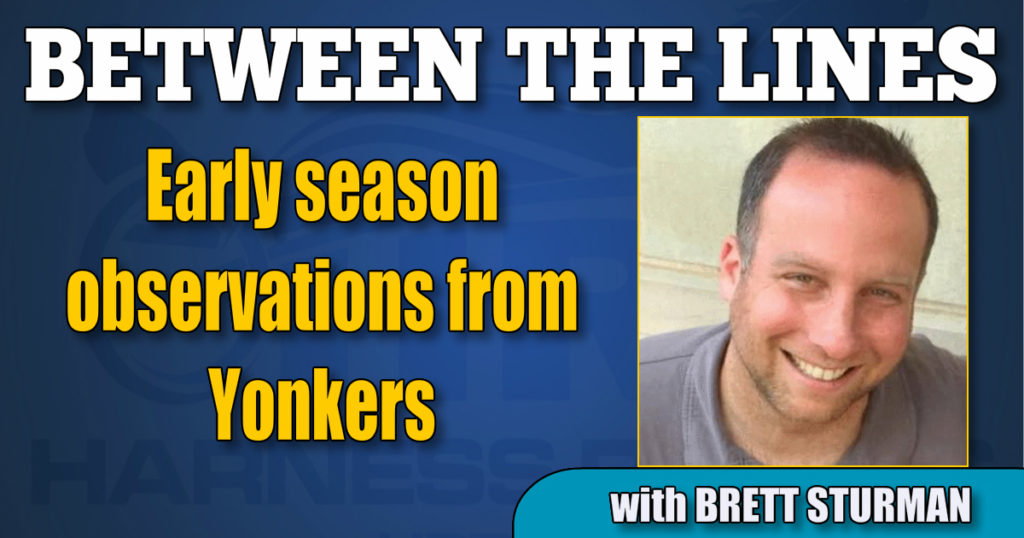 There’s been just two weeks of racing in 2020 at Yonkers Raceway and already there’s been some notable observations, both with the racing itself and economics of it.

For starters, horses sent out by trainer Andrew Harris have been nearly unbeatable winning 10 of 16 starts, with another two finishing second. Teaming up with leading driver Jason Bartlett, who is off to another fast start himself, just this week starters with that combination went 4 out of 6, all at odds-on prices.

As for handle, the track was extremely slow out of the gate last week, even by historical standards when the track first returns from hiatus. Monday and Tuesday night handles from Jan. 6 and 7 were only in the $500k range despite relatively full fields, but the sharpest drop off came last Saturday, Jan. 11. That night, there were only 10 races carded instead of the usual 12, and only two of those races had eight horses. That night, one field had six horses, and another was scratched down from six to four. The result was a Saturday handle of just $369,279.

For Alex Dadoyan, director of racing at Yonkers, last week’s numbers didn’t come as a surprise.

“I had been talking with our race secretary Bob Miecuna prior to the meet and he had expressed concerns about when we return because when we take a couple week break like Yonkers has done historically, that first week in January we’re always short of horses,” Dadoyan said. “It’s just that first week or two because we’re always short, and sure enough, that first week, it was a little short, no ways to put it, but it was better the following week and I think we’re back to normal now.”

This past week’s Monday and Tuesday numbers jumped up a couple hundred thousand both nights into the $700’s, and the fields for this weekend’s racing is more full than last weeks.

Having enough horses to race and drive handle is always a concern, and this year the competition to attract horses will start earlier than in years past. That’s because Pocono Downs starts racing on Feb. 8, over a month earlier than its season ever starts. It’s something that could impact not only Yonkers, whose schedule calls for racing five days a week, but possibly the Meadowlands as well, even though they’re only racing two days a week.

Asked if he had any concern on the early opening at Pocono, Dadoyan said, “Yes, of course. It’s hard to say what the impact is going to be until it happens, but I think everyone in region feels the impact when the Pennsylvania tracks of Pocono and Chester start back up (Chester opens, as per usual, in March). So, if that window is increasing when one of the tracks open, I think there will be an impact and we’ll see what that is.”

Granted it’s because of the time of year, but right now there are hardly any tracks that run during the evenings, regardless of the day of the week or weekend. Maybe more should be done so that other tracks are thrown into the mix this time of the year, but it does put tracks that do race in an advantageous position. “Over the last two Thursdays really, it’s just us and Woodbine and (to a lesser extent) Pompano, but there’s no one running really because the Meadowlands stopped running on Thursdays and Northfield wasn’t there, so it’s usually an easy night for us and the other tracks to stay away from each other,” said Dadoyan. “And this past Thursday, Pompano had eight races and Woodbine had 10. We had 12, so the last couple of races we were the only game in town, and we did great business. So, it’s just those days where you can really see the impact of the competing tracks because on a night like Friday, the Meadowlands was running, Woodbine was running, everyone was running and it’s tough out there.”

Just as tracks handle more with less competition on nights when other tracks are dark, the same effect is true when tracks don’t race over one another on the same race nights. Dadoyan noted, though, that despite best efforts to offer consistent post times, handle is impacted by the varying race-to-race drag of times at other larger tracks. This will never happen, but as has been said time and time again by myself and others, scheduled post times for a group of tracks that are centrally set and enforced would help each track maximize their exposure and handle.

On aesthetics, Yonkers has introduced a long overdue but nice-looking HD signal. The branding has moved from the traditional Yonkers green to the black and gold of MGM, with the real change being that in the process the live video streaming offered by Yonkers previously that was free isn’t as accessible in the same way. It can still be accessed at no charge through the ADW wagering platform associated with Yonkers, or through any other U.S.-based online wagering site; no different than most other tracks these days including the Meadowlands. Some may say that not being able to view the live stream directly through the track’s website isn’t helpful for handle, but the reality is that any person who is wagering to begin with would have access to free video through their ADW.

Throughout the next couple of months, there will changes to the racing landscape as newer tracks re-open and Yonkers begins its dual annual FFA pacing series for both older male and female pacers. It remains to be seen how the track will assess any challenges and how bettors will react to it.