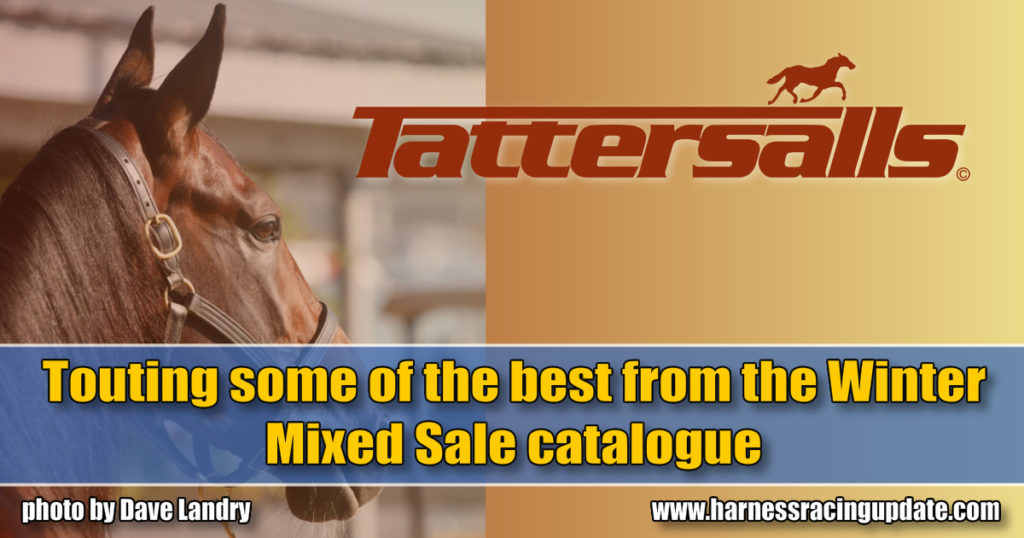 Touting some of the best from the Winter Mixed Sale catalogue

Preferred’s David Reid and Northwood’s Bob Boni shine a light on some of the notable horses they are selling Monday at The Meadowlands.

With the Tattersalls Winter Mixed Sale on tap on Monday afternoon (Jan. 20) at the Meadowlands, the two biggest consignors — Preferred Equine and Northwood Bloodstock — took some time to tout a few of their offerings to HRU.

The sale, which starts at noon on the Martin Luther King, Jr. holiday in the Big M paddock, will see some 130 head, as well as about 20 stallion shares offered. For complete details, visit: http://www.tattersallsredmile.com.

David Reid said his Preferred consignment is pleased to offer, “probably the best horse that’s in the sale — Lindy The Great (Hip #126). He’s a well-bred, good-looking horse that won the Caesar’s Trotting Classic last year, defeating some of the best trotters in the business. He qualified back very strong last week in :52.3 here at the Meadowlands with a last quarter in :26.1.”

Preferred is also selling a French mare named Chanced ’Occagnes (Hip #11), a Ready Cash mare out of Quiet Mary that is in foal to Muscle Hill.

“She came from Europe and has been here since December,” Reid said. “There’s some interest in that mare. She’ll be fun to sell.”

Preferred also has three Ontario-bred 2-year-old, “that are broke and going, and the consignor has provided videos of those.”

They will sell in succession as Hip #43 – Crown Patent (a Sebastian K filly out of Whitesand Samantha), Hip #44 — Hail To Reason (an Angus Hall filly out of Queen Nora) and Hip #45 — Infinity Stone (an Il Songo Dream colt out of Magic Factory).

“Then we get into the racehorses,” Reid said. “We have some race mare that also give good breeding value as well, including the warhorse Witch Dali (Hip #66),everybody knows her. Then there’s Make Mine Mocha (Hip #76) and the well-bred filly Jezzys Legacy (Hip #73), an interesting trotting mare out of the great Jezzy.

“Then, there’s the group of 4-year-olds, Union Forces (Hip #81) is a nice prospect. Western Exposure (Hip #82), Captain Malicious (Hip #86) – he’s out of the Ray Schnittker barn. Captain Trevor (Hip #88) was a :49 winner last year and he qualified (at the Meadowlands Friday) morning. Escapetothebeach (Hip #93), here’s another high-end pacer and one of the better colts last year. He qualified (at the Meadowlands Friday) morning and he looks like he’s ready for a good season.

“Then, in the older division, Trolley (Hip #111) is a proven trotter… We had another horse that won his qualifier (Friday) morning, Bicorne Hanover (Hip #146). He won in :52 flat and it was not-a-nice morning. That was a good update there.”

Reid said there will also be a number of nice stallion shares offered by Preferred.

“Hip #5, Valley Makayla, is an interesting mare. She’s a Donato Hanover in foal to Tactical Landing in his first crop and she’s already a stakes producer. Donato Hanover, obviously his mares have produced no less than Greenshoe, so I think we’ve got a little bit of a star here,” Boni said. “Her first two foals have both done some good on the stakes level and she’s carrying what seems to be an attractive horse from what have sold, so far. She’s also dual-eligible. She’s also eligible for the Kentucky program.

“On the racehorses, Hip #60 Pilgrims Lass. She’s a stakes winner by Muscle Mass. She’s got a record of :55 and change. She’s made almost $90,000. A pretty good filly. She made over $50,000 last year. She’s from the family of Perfect Spirit, a Hambletonian winner. She’d be a nice mare both race and breeding-wise. She could sell foals. She has a good page.”

“He just qualified yesterday. He made almost $70,000 last year,” Boni said. “He’s obviously a significant stakes winner. He’s from a sister to Yankee Cruiser. He’s got pedigree, he’s got everything. He’s a great half-mile track horse. He’s been test bred and he has an exceptional initial fertility test. So, he’s got a market somewhere for somebody. Obviously, he’s a racehorse because he was second in a qualifier (Friday) night at Yonkers off a layoff from November. He’s fresh and ready to go and he offers both aspects.”

Finally, Boni mentioned Hip #122, For A Dreameras, “a very nice son of Cantab Hall that made over $50,000 last year, winning in :53 at the Meadowlands. The last few days in December he won in :54.1 at the Meadowlands. He’s racing well. He has a win and a second in his last two starts and has a big pedigree. He is a very nice horse that will fit in just about anywhere. Lifetime he’s a winner of over $150,000. He is a legitimate horse.”

Reid, acting in his role as general manager of the sale, said he’s “very happy with the overall quality of the horses (being sold). The number of entries are down slightly over last year, but the overall quality is better. Right across a broad selection of categories. The broodmares, we’ve got in foal to proven, commercial sires, like Always B Miki, Father Patrick and Captaintreacherous. We’ve got a couple mares in foal to the first crop of Tactical Landing.

“The industry knows that the racehorse market is tight right now. We’ve had good interest in the sale and we expect to do a fair-market sale and we’re looking forward to getting them sold. We have a lot of promising lots to sell.”