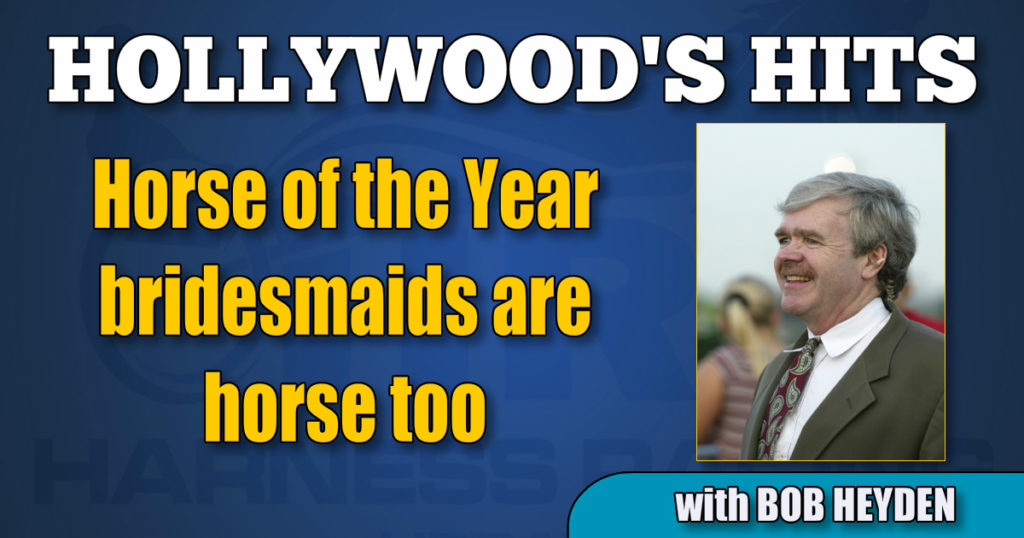 Horse of the Year bridesmaids are horse too

A look at some of the most memorable Horse of the Year runners-ups in the 20th century.

In 1947, Hoot Mon was second to his stablemate Victory Song in year one of the Horse of the Year award — 165-160 in the voting . Sep Palin and Castleton Farm had both. The polling was conducted by the Trotting Horse Club Of America. Fifty sports editors and radio commentators voted. Runner-sup Hoot Mon furthered his reputation by siring the first horse ever to win the HOY back to back — Scott Frost in 1955-1956. For trivia fans, he was the first runner-up to sire a HOY runner-up too, as Scott Frost as a 2 YO in 1954 actually got more first place votes than winner Stenographer but was second best on total points.

In 1955, Scott Frost posted the sport’s first ever Triple Crown, and this was year one of his back-to-back HOY titles. Adios Harry had the place spot, something he would do in 1956 also marking the only time in the 73-year history of the HOY balloting that the same two would finish 1-2 in consecutive years in order.

In 1957, Torpid won the HOY over Galophone — 724 to 208. Sixty-seven of the 84 responders went his way. In the 3YOCP division, Torpid dominated 249-3 over a colt named Meadowlands. John Simpson, Sr. handled the winner.

In 1958, the first tie occurred with Belle Acton and Emilys Pride tied at 28 votes each. The latter, the Hambletonian winner, would get the decision on points 438-407, marking the first time female horses went 1-2. Being second best for Team Haughton would happen a couple of more times before they eventually broke through in 1977 with their first of two HOY awards — Green Speed. Nihilator followed for the Haughtons in 1985.

In 1963, Speedy Scot won the HOY. He would be second the following year when the Bret Hanover Express took off. Overtrick was second in 1963.

In 1964, Bret Hanover went 24-for-24 and received 70 first place votes from the 185 who returned ballots. Ayres won the Trotting Triple Crown but did so in the wrong year as far as HOY. Speedy Scot was second best.

In 1965, Bret Hanover was in the middle of his threepeat. Bret Hanover defeated Hambletonian runner-up Armbro Flight.

In 1967, 2-year-old Nevele Pride was an incredible 26-for-29 and took the first of what would become the only trotting HOY threepeat. Romulus Hanover was second in the vote.

In 1970, a colt named Albatross, just 2, placed fourth on the HOY ticket, an award he would garner the next two years. He won his freshman division 203-1. Fresh Yankee won the HOY at age 7. The trotting mare would race another couple of seasons and retire the first North American-bred trotter to $1 million. Triple Crown winner and later dominant stallion Most Happy Fella was second in the voting, from the first crop of Meadow Skipper.

In 1971, Albatross in the first of a two-year stretch for the ages was the HOY. Steady Star was second best, aided by his world record 1:52 time trial.

In 1972, it was Albatross again. Stanley Dancer became the only trainer to have back-to-back HOYS on each gait. Super Bowl was second best off his Triple Crown season.

In 1973, Sir Dalrae won the HOY 87-7 over Hambletonian winner Flirth with 187 of 216 votes going the way of the Jim Dennis trainee. Odd note, of the 29 that did not vote for Sir Dalrae, they spread out their vote with 14 different horses.

In 1974, Delmonica Hanover won with the lowest ever percentage of votes — 24.8 per cent. Forty-eight votes went her way out of 194 cast. She won the Prix d’Amérique which likely decided the HOY as she was victorious only four other times. Armbro Nesbit was second, fresh off his 1:56.4 track record at Yonkers. Sixteen different horses got at least one first place vote.

In 1975, Silk Stocking was second to Savoir in the closest HOY vote ever 52-49. The 7-year-old gelding won over the 3-year-old filly pacing sensation. He was second in the 1971 Hambletonian won by Speedy Crown before Silk Stocking was foaled. She won the then richest race ever the $230,531 Monticello OTB Classic in 1975.

In 1976, Keystone Ore won over Keystone Pioneer. It was Dancer’s seventh and last HOY. Sixteen different horses got first place votes, with Ore defeating Pioneer 130-31. This final bridesmaid finish for Team Haughton would come the year before they broke through in 1977 with Green Speed.

In 1977, Green Speed dominated and gave Haughton his first HOY title, nine years after he went into the Hall Of Fame. Governor Skipper was the HOY runner-up.

In 1978, Abercrombie won over Speedy Somolli, the latter siring the first New Jersey-bred to win the Hambletonian — Nuclear Kosmos. Abercrombie sired the 1992 HOY Artsplace who rolled through a 16-16 season.

In 1979, Niatross was victorious. Nobody has been named HOY at ages 2 and 3 since. Hot Hitter, whose $826,52 bankroll was the single season all-time best to that point, was second in the HOY voting.

In 1980, Niatross defeated French Chef 238-1. But they both sired single-season earnings record holders — Nihilator in 1985 for Niatross and Beach Towel in 1990 for French Chef.

In 1982, Cam Fella burst upon the scene. He would win the HOY award in back to back seasons. In ’82 he defeated Genghis Khan who became the first horse to better 1:53 and 1:52 in the same season.

In 1984, Fancy Crown won over On The Road Again in what would be the first of two straight HOY runner-up finishes for OTRA. Bill O’Donnell drove the winner for Ted Andrews, and she was part of a day (8/16/84) where the Magic Man piloted 10 winners, five by day and another five by night, included in there were two HOYs and the richest race of all time, the $2,161,000 Woodrow Wilson.

In 1985, Nihilator became Billy Haughton’s first pacer to be named HOY when he defeated On The Road Again, who briefly held the earnings title. The HOY runner-up was a $10,500 yearling for Harry Poulton and Buddy Gilmour and also Pacer Of The Year runner-up both years (1984-1985)

In 1986, the battle of the undefeateds had Forrest Skipper defeat Jate Lobell in a year when they were 31-for-31 combined.

In 1987, John Campbell won his first HOY with Mack Lobell, who was also the 1988 winner. Jate Lobell was second again.

In 1990, Beach Towel dominated over No Sex Please 273-13. Two years earlier, No Sex Please was the only 3-year-old in the March Of Dimes Trot at Garden State Park.

In 1991, Giant Victory was telescopically second to Precious Bunny 270-10 giving the Meadowlands Pace winner the HOY title over the Hambletonian winner.

Anyway, Artsplace took off with the title, and his stablemate from 1991. Western Hanover, was second 243-30. (Gene Riegle had both in 1991, Bob McIntosh took over the training of Artsplace in 1992 for the pacer’s unblemished 16-for-16 season).

In 1993, Staying Together won the HOY over Presidential Ball thanks, in part, to a 1:48.2 new world record down a full second from the prior year’s 1:49.2 from HOY Artsplace. Career earnings of $2.2 million for Presidential Ball made him the richest ever pacer not to be named HOY.

In 1995, it wasC R Kay Suzie over Jennas Beach Boy. This was the first of two straight years JBBwould be HOY runner-up to a 3YOFT.

In 1997, it was a HOY no go for Triple Crown winner Western Dreamer, who had to settle for second honors to the dominant Malabar Man (16 13-3-0) the first trotter to average over $100G per start.

In 1999, once again the Triple Crown was not parlayed into a HOY. Blissfull Hall led in earnings $1,328,819, but could not derail the international star named Moni Maker.