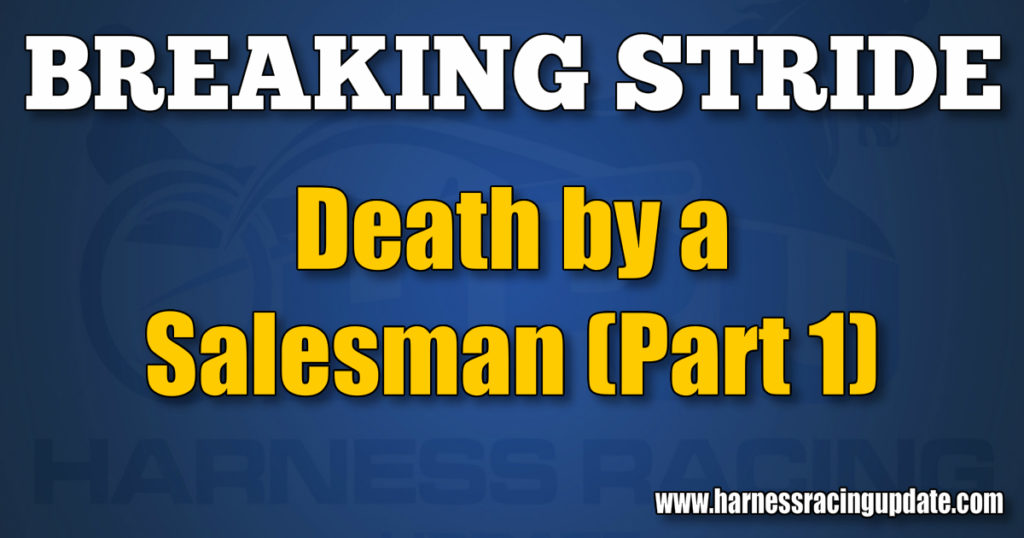 Death by a Salesman (Part 1)

Our mission this morning was to fetch an old black Franklin stove from theJunk in the TrunkAntique shop. The stove job gave me a chance to test-drive my latest delusion with my wealthy patron.

I opened with, “I just saw some numbers that were very disturbing.”

He grinned. “Your bar tab? Your checkbook? Your cholesterol?”

“Last night, I looked up the number of stallions standing in the state of Ohio open for business…and remember this is just Ohio because I ain’t looking up every state.”

“According to my calculations, and the print was small, so don’t take this to a courtroom, there are 109 stallions.”

He gave a raised eyebrow and said, “Your math is pathetic, but I get the gist. Standing a stallion is a challenging business.”

“I always have confidence I can do jobs better than the people who do the jobs every day. I could market a stallion.”

He heaved a scolding sigh and said, “Trey, Trey Trey, talk about over your skis. Let us review your resume. If memory serves, you gamble on horses and lose money.”

“You buy a yearling each year and lose money.”

“You sold a few yearlings from you broodmare, but never for the price that you anticipated.”

“You are in no way proficient in stallion marketing, pedigrees, stallion syndication, or the economics of the stallion business.”

“Of course, you should begin marketing stallions immediately.”

“Thank you. Let me begin with a question. How much did you pay for your plane ticket to London where you boarded the ship for your cruise around the world?”

He shrugged, “Honestly, I don’t know. An agency handled my arrangements.”

“A few years ago, using an Internet sale and traveling with a backpack, I flew first class, round trip New York to London for $287. A friend was working at the ticket counter, we hugged and chatted, she winked, pushed a few buttons, and upgraded me. Her move was possibly prohibited, but you notice I am not using her last name. Besides, this first-class seat remained unsold, so nobody got hurt.”

“What does this have to do with stallion bookings?”

“Somewhere above Iceland, after his third complimentary cocktail, the man across the aisle leaned over and slurred that he was on this way to a convention of coal mining equipment contractors. Then he bragged that his seat cost $1,900.”

“Airline tickets and stallion breeding contracts are not the same animals.”

“Maybe they should be more closely related. Every passenger on my flight probably paid a different amount. We all made a private transaction with several variables.”

“Trey, I’m sure there is a lot more involved in pricing a stallion and selling a breed contract -psychology, groupthink, connections, preferences, resales, state programs…”

I cut him off, “Yeah, yeah, blah blah. Let’s say that the owner of one of those 81stallions standing with fewer than 24 breedings decides to be my Trojan horse, or stalking horse, or is it a straw horse?”

“Thank you, Mister Dictionary. None of those is what I mean. Let’s say a wise owner gives Trey free rein with a test stallion.”

“He will be sorry, but proceed.”

“My first move will be to double, maybe triple, the currently listed stud fee. We will equal or surpass the top-priced stallion in the state. In January and February, the advertised fee for this stallion is $10,000. Literature and Breaking News will proclaim the new price. The price will not change, ever. I would spread the word via an online publication, “NEW PRICE,Breeding will go FAST, book now before the supply is gone.” This faux news lies somewhere between marketing and a whopper (after all, this a NEW price and FAST is a relative term).

“Relatively speaking, you are out of your mind.”

“Nobody would pay that much.”

“I would insist that the owner of the stallion breed a minimum of three mares to the stallion and secretly pay himself or herself ten grand to prove it is possible. After those breedings are on the books, not many customers will follow; perhaps a few ridiculously rich people, an alcoholic person in a weak moment, people who love this stallion, maybe a stray French person, and maybe a stray person with a sense of whimsy.”

“So your brilliant marketing idea is to hope for a stray buyer. Is this all you do all day, think of crazy plans?”

“Well, on the bright side, I’m not a crack addict.”

“Good to know since you are driving.”

I nodded and said, “Now, back to business. In March, my plan would be a “March Madness” 50 per cent off sale. In April, there will be a 70 per cent off sale. Heck, maybe a 90 per cent off sale will be down the line. Many people, my ex-wifecomes to mind, cannot resist a sale of this magnitude. She owns several hundred pairs of jeans and four thousand necklaces. They were all terrific deals.”

“The buyers who paid full price would be furious.”

“This is where we disagree. As a renowned businessperson, you should know that in 1959 or 1999, buyers might be furious. During the Stone Age, prices were set in stone. Today, wild fluctuations in pricing are normal – cable bills, medical bills, Sirius Radio fees, and cruise fares. For plenty of things, the sticker price means little. Go back to my $287 airline seat and step into my mind. If another passenger paid half of what I paid, or if they are flying for FREE, so what. Nobody parachutes into the North Sea because they found the person next to them paid less.”

He opined, “I don’t know the stallion business, but I have a hunch that some flexible pricing goes on via syndicates or other methods.”

“Of course it does. I am exhibit A, an unconnected nobody with less juice in the harness racing business than a petrified prune, but only once in a dozen breedings did I pay sticker price.”

“You will never get the truly elite stallion.”

“I’m not so sure, but that’s another world. Just like I will never fly on a private jet with sleeping cubicles, we are different market segments.”

“Don’t they say the stud fee is something a breeder should never skimp on?”

“They may say it. Trey doesn’t buy it. Purchasing semen from a stallion is a ridiculous concept. We are buying dreams. Everyone should have the illusion that they make a great deal when they sign a breeding contract.”

“Well, to be honest, I don’t think what you are suggesting is a revolutionary marketing concept.”

We pulled intoJunk in the Trunk. “Of course not, but I’m just getting started selling semen to people with a broodmare and an open mind. When we get back in the car, I will make this increased pricing madness look sane.” s