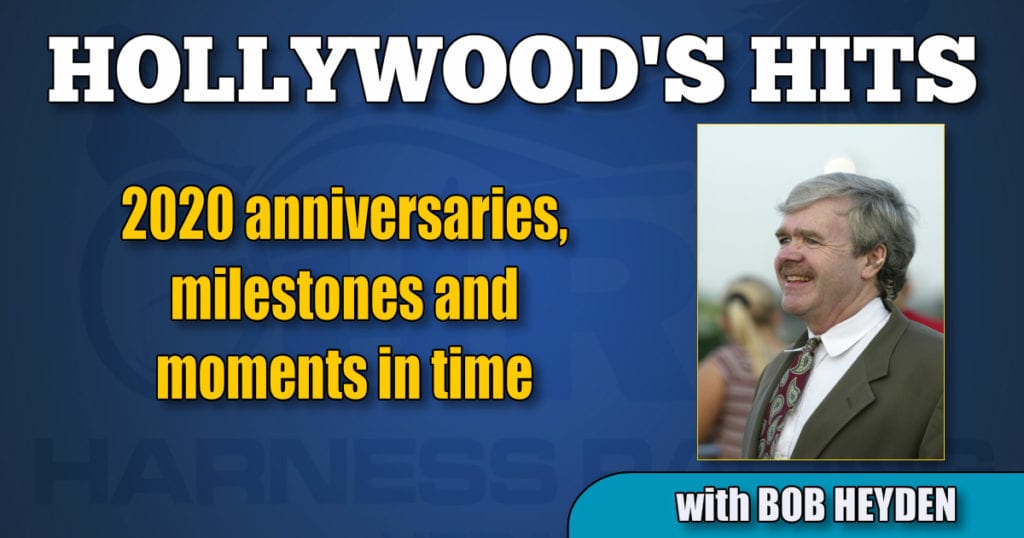 2020 anniversaries, milestones and moments in time

2020 will be a big year in terms of milestones, anniversaries, birthdays, etc.

2020 will also mark the 40th anniversary of what could be the sport’s most incredible single season —Niatross’ 1980 campaign. He more than doubled what any horse had ever earned before- — $1,414,313. Abercrombie’s 1978 season of $703,260 was the high water mark. Niatross also blasted the all-time speed mark down nearly three seconds to 1:49.1. The two-time Horse of the Year did this at both 2 and 3. It has not duplicated since.

It will also be the 40th anniversary of the sport’s first $1 million race the $1,011,000 Meadowlands Pace won by Niatross, which came on the heels of his only two defeats.

Also celebrating a 40th anniversary in 2020 is the sport’s first $2 million race — the 1980 Woodrow Wilson for a pot of $2,011,000. Land Grant at 69-1 won it, making it a doubly great summer for Del Insko. He went into the Hall Of Fame the month before this August race, the first of only two held in harness history.

This year will mark the 50th anniversary of Fresh Yankee’s HOY season — made even more incredible when you consider that the great trotting mare went 56 straight races without being worse than second and her 31 20-11-0 slate of 1970 right in middle of that streak. The one-time $900 yearling became the first North American bred trotter to top $1 million.

This year will mark the 60th birthday for Jimmy Takter (at the end of September). Can it be possible he’s that old? His bio says yes.

This year will also be the 60th anniversary of the foaling of Meadow Skipper, the most influential sire of the modern era. Most Happy Fella from the first crop, Albatross from the second crop and it picked up from there. In the first $2 million race held (see above) — every one of the 12 finalists traced back to one the only Meadow Skipper.
2020 will also mark the 65th birthday for John Campbell (on April 8).

It will also be 70 years since Proximity became the first female to be named Horse of the Year (1950). In a year where Shartin N dominated and set the world standard of 1:46.4, it was 70 years ago when Proximity won $87,175 to set the single season record at the time.

Seventy years ago, both Cat Manzi and Mike Lachance were born — June 27 and Dec. 16, respectively. Both are Hall Of Famers. The busiest driver in harness history with over 95 thousand trips behind the gate, Catman epitomized a work ethic rarely seen in any business. Lachance won four straight dash titles from 1984-1987-then moved to the Meadowlands and right off the bat won the Meadowlands Pace with the brilliant Matts Scooter. Then 3 Hambletonians in the 1990s and another tacked on in 2003-Amigo Hall.

This year will mark 80 years since Roosevelt opened in 1940. Ironically, it was also 80 years since Herve Filion was born — Roosevelt’s all-time leading dash winning driver. Roosevelt raced 48 years and in many ways put harness racing on the map. The same way Herve put catch-driving into the daily conversation. The late Jim Doherty was also born in 1940, and this year a couple of Hambletonian specialists named Ron Gurfein and Chuck Sylvester will also hit the Big 8-0 in the fall.