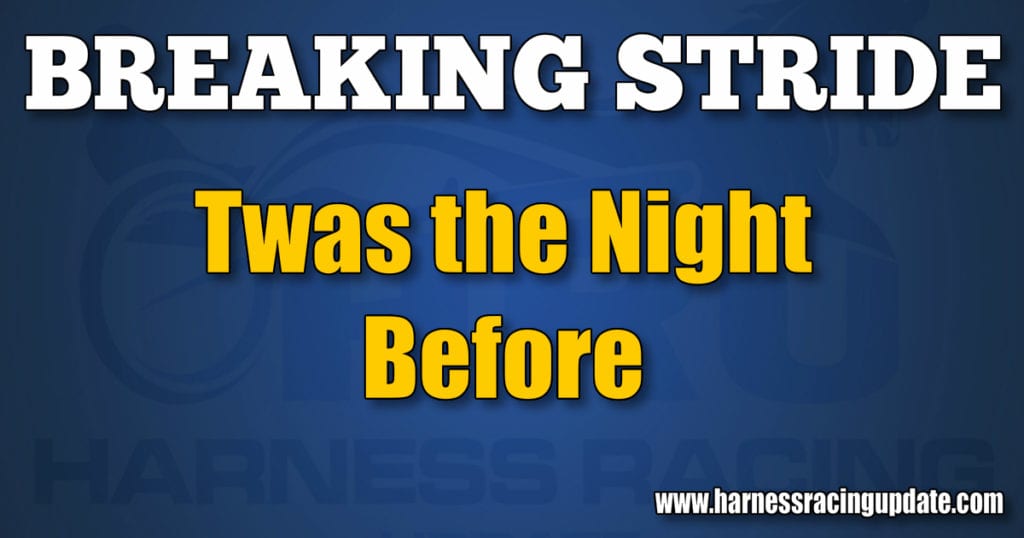 Twas the Night Before

Twas the night before Christmas, when out at the track,
Not a creature was stirring, they ain’t coming back,
The future is streaming, it’s so plain to see,
But half of our racetracks aren’t even HD,

The gamblers are nestled, all snug in their beds,
While visions of small take-outs, dance in their heads,
With mamas in fields, and babies in wombs,
Hope markets stay strong, so horse sales aren’t doomed,

While out on in the think tanks there’s much trepidation,
“This sport will be toast without improved presentation,”
“We need soundtracks and graphics and commentary galore,”
The movers and shakers continue to snore,

Our fans, and gamblers, and owners are great,
Demographics are poor, and the future won’t wait,
The moon on the breast of a sport that needs changing,
Sees fiefdoms and old guards that restrict rearranging,

Casinos have helped us, they’ve kept us afloat,
But they aren’t our castle, they’re only a moat,
It is what it is, no sense in complaining,
Ideas, and energy help more than disdaining,

Imagine a titan like Bezos or Page,
If they took our reins, we’d be all the rage,
With lawyers, money, rooms full of young brains,
The nation would learn what we see in this game,

The racing, the intrigue, the full sporting life,
Are terrific escapes from a world filled with strife.
“We’re small, but amazing, with countless great people,
Let’s push on, recruit, and send tweets from the steeples,

Enjoy every day, every race, every horse,
This Christmas, rest easy, you chose the right course,
HAPPY CHRISTMAS TO ALL, AND TO ALL A GOODNIGHT!

For 14 years, the author of the poem would remain unknown. However, in 1837, American author and poet Charles Hoffman, editor of The New-York Book of Poetry, outed his friend Moore, a New York scholar and author, as the writer. In 1844, Moore finally acknowledged his authorship and included the poem in his collection entitled Poems.

The poem was a smash hit (the words smash hit and poem are rarely used in the same sentence).

Many believe the poem was responsible for some of the perceptions of Santa Claus from the mid-nineteenth century through today.

The poem established the names of Santa’s eight tiny reindeer (although for some reason, Rudolph was MIA).

The poem also had a big impact on the practice of giving gifts around Christmas (which, in the opinion of many of us, is not a great legacy).

The poem’s meter was composed using anapestic tetrameter (which sounds like a giant, radioactive spider from a 1950’s horror film), but technically refers to four feet of unstressed-unstressed-stressed structure similar to limerick construction.

And, of course, where would this decade be without controversy, competing factions and allegedly fake news.

Using the works of others is a tricky business for legal reasons. Let us go to the legal record books. Published anonymously, the copyrights would last for 100 years from the year of the original publication, or 125 years from the year of credited creation, whichever expires first. Since “A Visit From St. Nicholas” was published 195 years ago, feel free to use it. All copyright protection has expired and the work becomes part of the public domain.

This is good news. If money was on the line, the battle that ensued in recent years could have been worse.

Dispute of Clement Clarke Moore’s authorship of the poem faced challenges. Professor Donald Foster used textual content analysis and external evidence (which sounds like no quid quo pro) to argue that Moore could not have been the author. Foster believes that Major Henry Livingston Jr., a New Yorker, be attributed as the author, a view long favored by the Livingston family.

Foster’s claim for the Livingstons was countered by document dealer and historian, Seth Kellar. Kellar once owned one of Moore’s original manuscripts of the poem and offers a point-by-point rebuttal of both Foster’s linguistic analysis and external findings, buttressed by the work of autograph experts.

Check your favorite websites and news channels, and ONLY your favorites, for “Breaking News” and breathless interviews with all parties involved in the “Twas the Night Before Christmas” scandal.