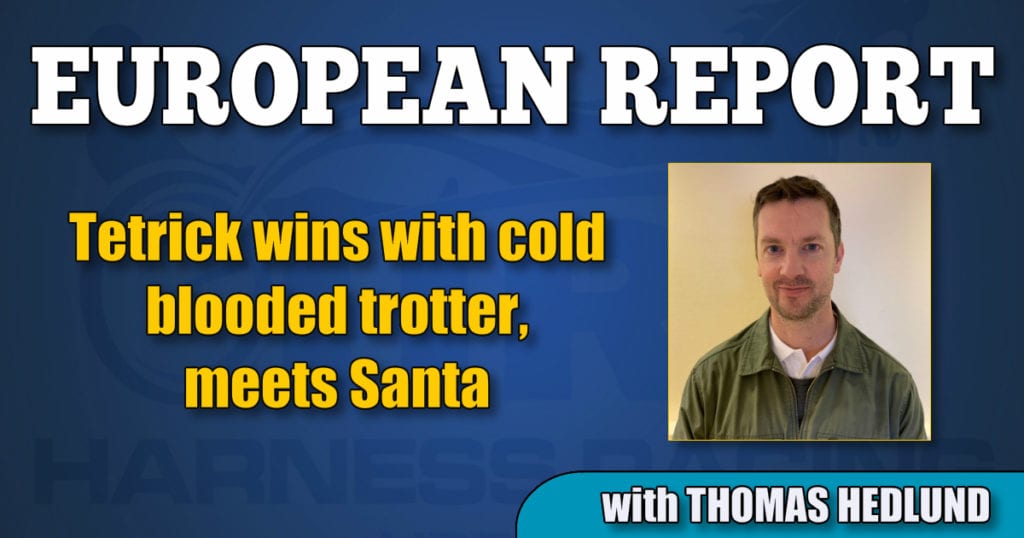 The American driver finished third in the Arctic Challenge on Saturday night near the North Pole in Finland, but managed a win with cold blooded trotter Pikku-Ryti.

American top driver Tim Tetrick was twice paired with Finnish cold blooded trotters when the Arctic Challenge was held Saturday night on a 5/8 mile track with packed snow in Rovaniemi in the very north of Finland.

And when Tetrick put the 11-year-old gelding Pikku-Ryti in front a quarter of a mile into the race, the cold blooded trotter sprinted away to a safe win.

“I had no idea how fast we were going, but my horse was nice and trotted well. It’s a tradition here with these Finnish horses and it’s exciting to sit behind one of them. I don’t know how I could get him to trot so fast from the start, I just did what I always do,” said Tetrick in the winner’s circle after the race.

The exotic element of the evening was indeed Tetrick, who finished third in the Arctic Challenge competition.

Tetrick’s win with Pikku-Ryti was followed by a third place in the second race before the American driver was last in the third race. Finnish driver Antti Teivanen won Arctic Challenge ahead of Jorma Kontio.

American drivers have won with cold blooded trotters before. It’s not often that drivers from other countries try these, sometimes not well gaited horses in races, but it has happened before and in the late 1980s, American trainer and driver Mark O’Mara succeeded with a cold blooded trotter during an invitation to Romme racetrack in Sweden.

Replay of Tim Tetrick’s win with the cold blooded trotter.