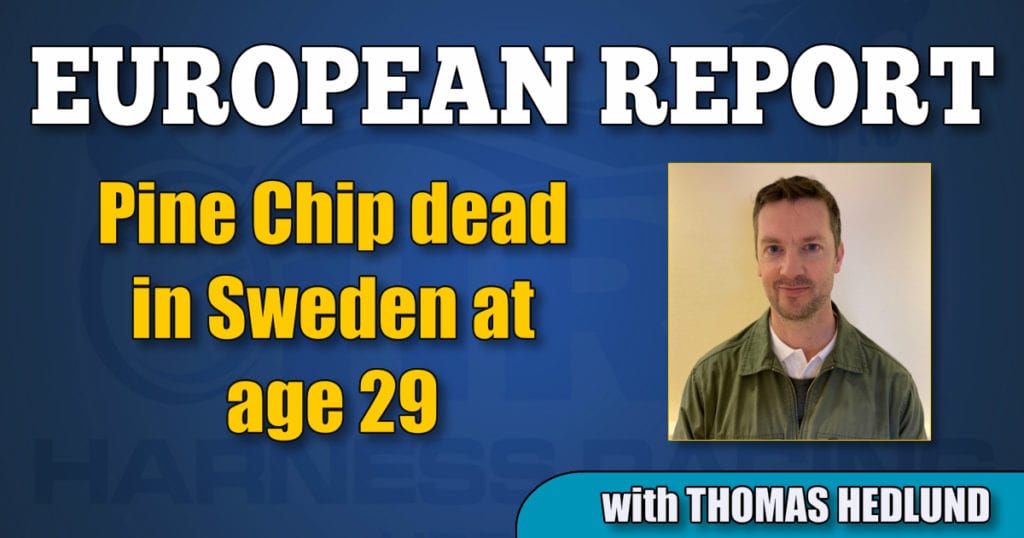 Pine Chip is dead in Sweden at age 29

Pine Chip, one of the greatest trotters in the world, died at Stuteri Broline in Sweden on Wednesday Dec. 4 at the age of 29.

Chuck Sylvester trained the son of Arndon during the trotter’s career in America and Pine Chip became well known to European harness racing fans when he came to Solvalla and the Elitloppet in 1994, where he was superior in the elimination and later the same day fought a memorable battle against Swedish hero Copiad.

Pine Chip served as a stud in Sweden after the successful years in the U.S., where he was Horse Of The Year both in 1993 and 1994. Pine Chip set world record at Red Mile on Oct. 1 when he, for the first time by a trotter, reached the mile in 1:51.

As a sire, Pine Chip was very successful. Scarlet Knight (2001) and Chip Chip Hooray (2002) won the Hambletonian at Meadowlands and in Europe, there are countless top trotters with Pine Chip as their sire.

Jean-Michel Bazire’s 7-year-old gelding Cleangame (Ouragan de Celland) posted the top trainer’s fourth consecutive victory in $149,000 final of Grand National du Trot when the race was held on Dec. 1 at Vincennes. Bazire himself was still suspended and Eric Raffin was entrusted behind one of the best trotters in the world for the moment.

The duo started 50 meters behind in a race over 1.8 miles and Raffin used both speed and strength in Cleangame before the victory was safe. Cleangame was given order to attack three wide after less than a half mile, and Bazire’s charge made strong progress while the pace was set high before he reached position outside leader and stablemate Dorgos de Guez with 5/8ths of a mile to go. Shortly after, Raffin pushed another gear and Cleangame was soon in front. When on the lead, Cleangame showed that he was more or less outstanding, again. He won in a mile rate of 1:55.

On Monday afternoon, the $110,000 Prix Philippe du Rozier monté race (racing under saddle) was held at Vincennes. The harness racing arena in Paris is where the best monte racing is held during the winter months in Europe. Great horses enter the black track every week and the purses are high in almost all races.

Four-year-old Fleche Bourbon (Saxo de Vandel), trained by Sébastien Guarato and with Alexandre Abrivard in the saddle, took a wire-to-wire victory in phenomenal mile rate of 1:54 over 1.3 miles. This was her fifth consecutive win and her 12th victory in 17 attempts.

The $121,800 Grand Prix du Bourbonnais over 1.7 miles is schuled at Vincennes on Sunday, Dec.8 and Jean-Michel Bazire dominates the race with five participants.

Prix d’Amérique winner Belina Josselyn is the top trainer and driver’s choice this time and the 8-year-old Love You mare still has a lot to prove before the fans consider her as a serious choice in Prix d’Amérique in January next year.

Bazire also has Volokaja Hindö, Looking Superb, Davidson du Pont and Calaska de Guez in the Grand Prix du Bourbonnais, but the spectators in Paris will most probably search for another champion trotter in the field of 18 horses. Bold Eagle, recent Breeders Crown winner in America, is back at Vincennes and even if he already is safe for the Prix d’Amérique – if the entourage around him want to race there – this entry is exciting for all fans. Eric Raffin will drive Sébastien Guarato’s horse.

In Paris on Saturday Dec. 7, Sébastien Guarato trained Face Time Bourbon (Ready Cash), by many considered the best 4-year-old trotter in the world, will make an entry in $110,000 Prix Octave Douesnel and as usual, Björn Goop will steer the dominant trotter in a field of 10 horses. Face Time Bourbon is one of the earliest choices for the victory in Prix d’Amérique 2020, according to several gambling offices around Europe.

The Bank leaves Sweden for Canada

Breeders Crown winning Donato Hanover son The Bank will serve as stud in Canada 2020, according to sulkysport.se.

Winbak Farm is now part owners in The Bank and the horse will stand stud in Ontario for the price of $5,000 Cdn.