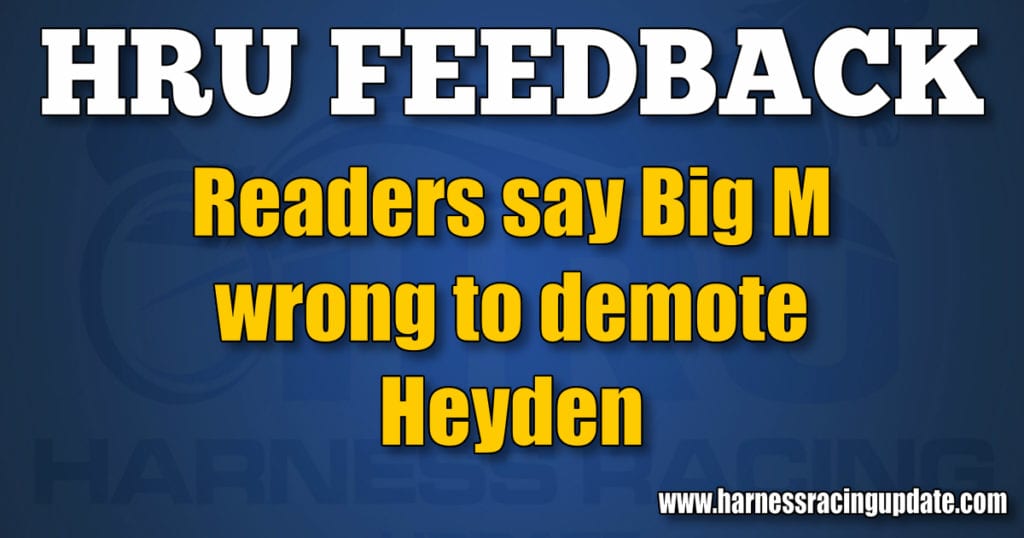 Shaking my head at Heyden demotion

After reading the article about the demotion of “Hollywood Heyden” (full story here) all I can does shake my head. As far as I am concerned this is just another misstep by what I will call “the crew”. First was the god awful a, b, c racing conditions they tried in which no one liked. Then a few years ago they didn’t bring Dave Brower back, Dave is great on the Meadowlands broadcast and is extremely knowledgeable. He was sorely missed, and then they eventually did the right thing and brought him back. Now this news of a demoted Bob Heyden is a joke. I think the problem with “the crew” is they want only yes men/women, that’s not to say that I don’t think that Brower/Heyden aren’t good soldiers, I think they have earned the right to be the two top guys and, to be the main guys during the races. You can’t replace the knowledge that “Hollywood” has by bringing in someone else. When I watch the Meadowlands feed, I want smart, concise analysis, not a bunch of long winded rambling. I’m pretty sure I won’t be the only person is unhappy about this decision, but then again there aren’t many things I have been happy with since “the crew” took over.

I’ve been associated with harness racing for the last 55 years, from Michigan, to Canada, to California. I’ve witnessed the greatest drivers drive, listened to the greatest callers call, and the greatest analysts analyze and Mr. Bob “Hollywood” Heyden is by far, far the GREATEST of the great harness racing ambassadors of the sport.

The BIG M just made a BIG Mistake…..again. The drivers, trainers and us owners must protest in honor of our great ambassador.

Next, the BIG M will want Tim and Yannick to retire because they’ve won their share of money.

Unfortunate to hear about Heyden

What an unfortunate note to hear about Bob Heyden, an irony not lost in the same issue in which we hear about Ron Pierce’s new life, and just days after Roger Houston’s retirement. Many I suspect have tried to hold onto a game that is only a shadow of its old self. The days of thousands roaring in the stands. The Grand Circuit dominated not by a few, but truly gifted horsemen without degrees in chemistry. Bob Heyden’s reduction to “fill in” is not so much an insult than it is a cry for a help to keep a slow sinking industry afloat. Some herald the recent record breaking yearling sales as a good thing for the game. Not really. Like our society it only serves to drive a wedge between those with cash and access, and the old school horseman who could do his own shoeing, hang one up, and competitively get one around the track. Gone, mostly, are the days of community where familial relationships allowed us as one to tackle our problems and overcome our challenges. It’s a corporate game now. It’s no longer about the person, but juggling scenarios searching for success; whatever that is in the face of sports betting opening up tons of gambling competition, Twitter tweets all day and all night, and countless entertainment opportunities only a cell phone click away. Like Pierce, Campbell and Roger, Heyden will be just fine.