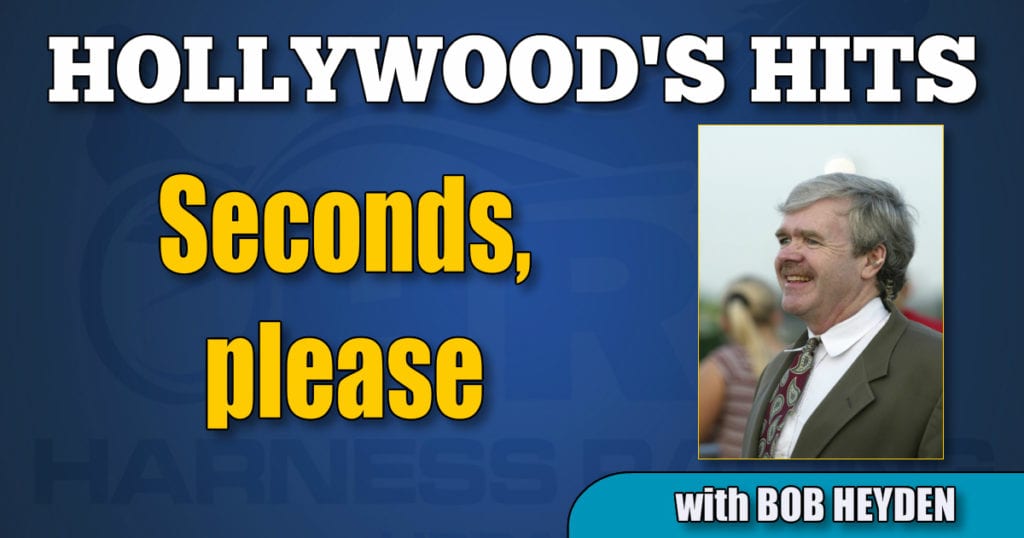 In 2019, he finished second five times to four different horses:

Best In Show in the Meadowlands Pace

American Mercury in the Messenger

Dancin Lou in the Breeders Crown

Shartin N is all set to put a bow on her likely Horse of the Year season starting from post 1 in the Mares Pace Saturday. She has two seconds, both to Caviart Ally, in the Allerage and the Breeders Crown. It is unusual for any horse to defeat a HOY twice or more in the same season, -but that didn’t seem to bother Glidemaster in 2006. The Triple Crown winner and easy winner when it came HOY time, he was defeated four times by Majestic Son, who was named Canadian Horse of the Year. Glidemaster was 15 8-7-0 that year and never worse than second.

Shartin N, when she gets behind the gate, will become the first female with a sub-1:47 record to ever compete at the Meadowlands.

Some very famous horses have made their last start of the year at the Meadowlands a victory en route to the Horse of the Year award:
2003 — No Pan Intended  2004 — Rainbow Blue  2005 — Rocknroll Hanover  2008 — Somebeachsomewhere  2013 — Bee A Magician  2016 — Always B Miki

Speaking of seconds….
Papi Rob Hanover was set back to second in the 2019 Breeders Crown. The outstanding freshman competes for Brett Pelling, who 21 years ago in the Governor’s Cup had another potential DQ, though this one though went his way. A 20-minute inquiry into possible interference involving The Panderosa was not allowed and he remained second to Island Fantasy, the divisional winner. The Panderosa would go on to win two million-dollar races as a sophomore — the North America Cup and the Meadowlands Pace.

She was foaled in 2012, six weeks after another outstanding Ron Burke trained trotting mare — Mission Brief. Hannelore was born on April 20 and Mission Brief on Feb. 29.

He won over $4.2 million, was a seven-time Breeders Crown finalist and was the last horse to defeat 2007 Horse of the Year Donato Hanover, doing so in both the elims and the final of the 2007 Breeders Crown.

“I was quite upset when I got the call last week. There was nothing leading up to this. He was in Maine and running around with his friend Likeabatoutahell. This was one tough and special horse. He came up and looked Donato Hanover in the eye twice at three and won the Breeders Crown. How many horses do you know who go to the Elittlopp three straight years at 5,6 and 7. He won his elimination easily at 5, then tied up and tired in the final. His best race was one year when he won the Titan Cup in 1:51. The track was soft that night and the pacers weren’t going that much. It was like a 1:49 trotting mile. It’s strange that a horse who won that many big races and that much money never won any year-end awards. There was always another horse who seemed to have a better year. He always was racing in the top class.”

Arch Madness was from the final crop of Balanced Image and was the latter’s richest and fastest (1:50.2) offspring.

“(Arch Madness) won the Allerage at age 9 and competed until midway through his 10-year-old season.”