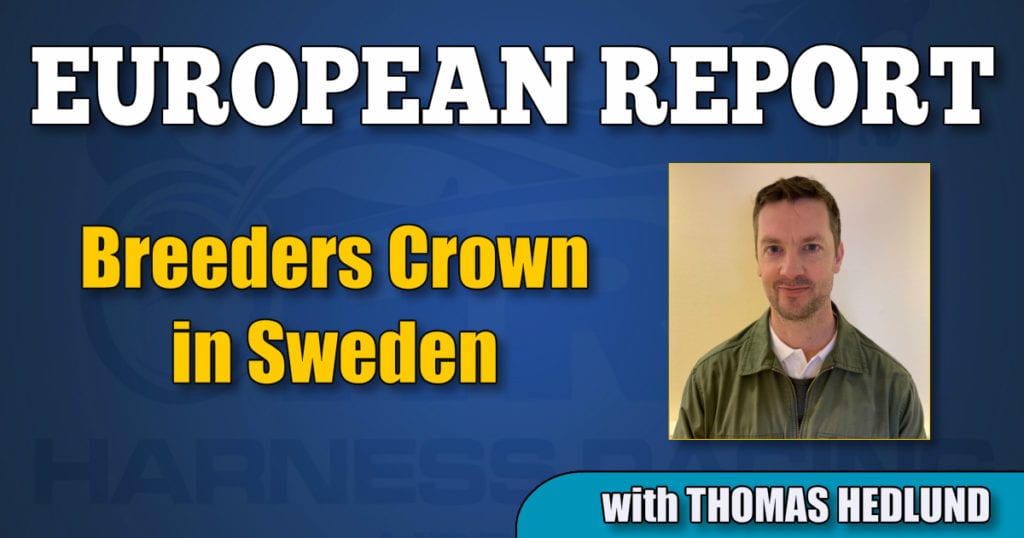 Four divisions of the $328,000 Swedish Breeders Crown were held at Sundbyholm racetrack in Eskilstuna on Sunday afternoon and the 3-year-old colts and geldings were first to enter the track.

Robert Bergh’s Power (Googoo Gaagaa), together with Jerry Riordan’s Aetos Kronos (Bold Eagle), had been the dominants in the crop until the last of the big stake races for the season and the runner up from $820,000 Kriteriet in September, Brother Bill (From Above) showed that he is ready to claim the throne.

Timo Nurmos’ trotter came from an impressive win in the elimination and from perfect post position, driver Jorma Kontio hit an early lead while Power advanced for position first over mid-race. Brother Bill was superior this day and won easily in mile rate 1:56.3 over 1.3 miles.

“Brother Bill was just splendid in his gait today and the horse has developed a lot during the season. We had no luck in the Kriteriet, but now he’s a stakes winner,” said Nurmos.

Jorma Kontio jumped from Nurmos to Stefan Melander when it was time for the 3-year-old mares and behind Muscle Hill mare Ganga Bae he did everything right. From post one behind the gate, Kontio focused on keeping first choice Mascate Match (Muscle Mass) on the outside and the tactical choice proved to be the right one.

Ganga Bae and Mascate Match struggled side by side at the stretch, but Stefan Melander’s mare was the toughest one this time. Ganga Bae came home in mile rate 1:57.4 over 1.3 miles.

“I had the luck to drive great horses today and we also were lucky with the post positions. Ganga Bae was quick from the start and today she was the best horse,” said Jorma Kontio.

Ganga Bae is owned by Courant Stable in Sweden.

Daniel Redén’s Conrads Rödluva (S.J.’s Caviar) took a back-to-back triumph in her Breeders Crown. Last year, the chestnut coloured mare was outstanding in the crop, but in 2019 Conrads Rödluva has been out of luck in the biggest stake races and both Activated and Racing Brodda have reached at least the same level as Redén’s trotter.

This time, in the Breeders Crown for 4-year-old mares, Conrads Rödluva was a little bit of an underdog since Racing Brodda became the first choice and the favourite got a trip that was too heavy to be a serious challenger at the end of the race. Instead, Örjan Kihlström saved the power in Conrads Rödluva in third over and the attack was settled three wide with a half mile to go. In the stretch, Conrads Rödluva claimed the race easily and won in a mile rate 1:55.3.

Activated (Jocose) got a nice trip in the back of Conrads Rödluva and finished second ahead of leader Staro Miami (S.J.’s Caviar).

”It was really nice that she could show how good she is in a stake race before the season is over and I had a great feeling before the race. She is just a phenomenal horse,” said Redén.

Örjan Kihlström didn’t want to be worse than Jorma Kontio, so in the division for 4-year-old colts and geldings he sent Roger Walmann’s Forfantone Am (Muscle Hill) to the front after a spectacular opening where first choice Inti Boko went off stride and where early leader Tae Kwon Deo made a break after 250 meters. At that moment, Kihlström found the lead and when in front, much of the race was over. Betting Gangster (Going Kronos) left fourth over at the back stretch and landed first over in the last turn, and it seemed like Jerry Riordan’s trotter really could challenge Forfantone Am, but Roger Walmann’s horse fought strongly in the lead and held Betting Gangster behind him by a neck at the wire. Ferrari Sisu (Djali Boko) sprinted strongly for the show.

”Forfantone Am has been great during two seasons, but hasn’t had any luck in the big races, so this feels nice for all the people around the horse”, said Roger Walmann after the race.

The French winter meeting in Paris is underway and group races are on the race cards almost every time Vincennes opens its gates for the spectators.

On Saturday afternoon, the 3-year-olds were in focus and in the $120,000 Prix Reine du Corta, for mares, Sébastien Guarato-trained Gunilla d’Atout (Ready Cash), paired with Eric Raffin, was strongest after a trip mostly first over.

Gunilla d’Atout grabbed her sixth win out of eight starts and put up a mile rate of 1:58 over 1.3 miles.

The 3-year-old colts gathered around the black track of Vincennes when $120,000 Prix Abel Bassigny lay ahead later on the race card and trainer Philippe Allaire celebrated great success since his star Gotland (Ready Cash) was served a relaxing trip behind leader and stablemate Golden Bridge by Eric Raffin. In the last turn, Golden Bridge and driver Yoann Lebourgois tried to leave their opponents, which implied that Gotland found plenty of space to start his serious attack for the victory. Mid-stretch, the battle was over. Gotland captured his 10th win out of 14 attempts and it’s no doubt that Philippe Allaire trains many of the best 3-year-olds in France this year.

The $170,000 Gran Premio Palio di Communi is one of the classic races the older elite in Italy and, traditionally, several European trotters gather around the half-mile track of Montegiorgio in the northern part of the country.

Norwegian-bred Cokstile (Quite Easy), now trained in Italy and driven by Antonio di Nardo, aimed for position first over while merited Arazi Boko controlled the field in front. Cokstile was the toughest horse on Sunday night and he won a length ahead of Arazi Boko and French contender Billie de Montfort.

The time, 1:53.2, is new record for the race and this was Cokstile’s second Group 1 victory in a short time in Italy. In October, he won the prestigious $300,000 Gran Premio Delle Nazioni.