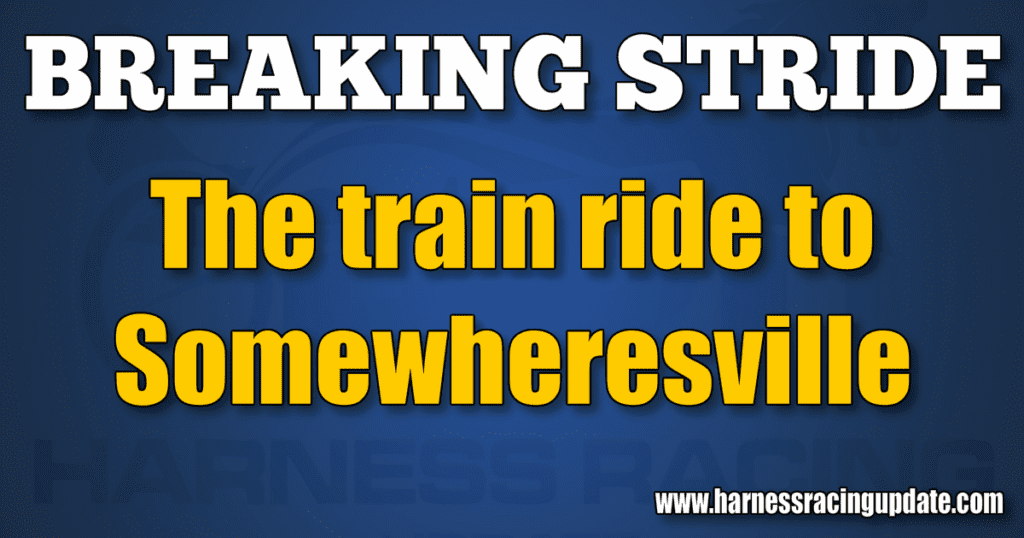 The Train ride to Somewheresville

My boss pulled the passenger door of my car shut, buckled his seatbelt, and went for my jugular, “Explain to me how the yearling you bought last October was fun.”

“The ride baby, every yearling is a long, slow ride.”

He blew a raspberry and said, “An expensive ride to Nowheresville.”

Mimicking the butler from Downton Abbey, I lowered my voice and said, “Perspective my good man. It is best to consider buying a yearling as if you were purchasing a train ticket to an unknown destination. You may find yourself on a long or short trip. The trip can be pleasurable or hazardous. Statistically, the likelihood is that your excursion will be expensive and perilous.”

He cupped his hands on top of his head and came close to shouting, “Who the hell gets on that train? Crazy people?”

“The one you paid fifteen grand for?”

I nodded, “Let us examine her relative value.”

“Please do Trey, walk me through the minefield of your brain.”

“The first part of the ride was buying her, buying our ticket to ride. My pal and I spent weeks looking through catalogs, looking for yearlings we wanted, and watching videos. The pre-ride, planning the ride, and selecting the ticket is a lot of fun. Then the auction is exciting. We haven’t even boarded the train and we are already having fun.”

He asked, “Why that yearling, or should I ask, why that ride?”

“Every trip is different. From the first day the catalog was released we liked this trotting filly. We thought she would sell for around thirty grand based on what the last several sold for in her family. For this ride, we wanted a well-bred filly because at some point we will need to replace our one and only broodmare.”

He huffed, “You thought this was a good deal, trust me, in the world of business, except for a few outliers, yearlings are not good investments.”

I tried to explain the inexplicable, “They’re dreams, yearlings are not IPO’s. To quote Raymond Chandler, ‘We have dreams, but we know now that most of them will come to nothing and fortunately, we know that it really doesn’t matter.’ This first stop on the yearling train ride is always a party. I mean, everyone leaves the auction with a champion at the end of their lead shank.”

He paused and then spoke softly, “Okay, the selection process could be enjoyable, but where is the rest of the fun?”

“Around every bend in the road, dreaming of a champion, renaming the filly, watching her being broke to harness, watching her jog, deciding on how to stake her, following her progress, following the progress of horses in her family who continue to race, and seeing her go the right way on the racetrack for the first time.”

“But your filly didn’t race!”

“That’s part of the ride. There will be good stops and bad stops, some predictable and some unpredictable. They all are of interest. For example, very early on the filly popped a gravel. I wasn’t sure what that was, but I learned. From what I read, it is when something works its way down the wall of the hoof and one day it “pops” out the bottom of the foot. This may not be a big deal, but for this particular filly, maybe it weakened part of her hoof wall and she developed a quarter crack. All winter long the trainer and groom had to deal with shoes and treatments.”

“The filly didn’t race because of this?”

“Who knows? She never seemed to be completely comfortable on that foot. She had good days and days that she seemed ouchie. She trained down to the teens, but the clock was ticking and we decided that her 2-year-old season was not in the cards.”

“And to you, this was worth, what, thirty grand?”

“Well, first of all, it was less. I have a partner, actually two partners, but one of them is silent, which is another story for another time. Second, the ride is not over, she may race great as a 3-year-old. She might be a champion. Third, she might make a great broodmare.”

He gave a smaller raspberry than the first, “Might, perchance, possibly, maybe … on planet earth it doesn’t seem like that ride was enough for the price of the ticket to ride.”

“What’s enough? People are different. For some the money is a big burn, for others, it’s an insignificant blip. To those of us who love the game, that’s the cool part of buying these yearlings, you never know where the hell you are going and what’s around the next curve. The part of this ride that you and most people don’t, or can’t, wrap their mind around is losing money.”

“That’s why this game is not for most people. Turning a long-term profit is a happy delusion for owners. They heard rumors of a mythical sportsman who buys yearlings and makes money. His name is Yeti and he lives on Fantasy Island. My friend, if I can nudge you into playing the yearling game, consider it a hobby, an experience, or an experiment. Play it fair and don’t expect to add to your portfolio.”

“Would I like to make money? Sure, but the dream is still flickering. The train is still on the tracks. The big question is, “Am I having enough fun to justify paying for the trip?”

“And you claim the answer is yes?”

I nod and say, “If losing money is going to sour you, don’t play. Take the money and buy a sailboat, take a long cruise, go on a safari, or refurbish your man cave. Heck, I know I guy who invested twenty grand in the first edition of a book in Latin last year. What FUN is that?”

“You plead a good case Trey, too bad much of it is insanity.”

“Yeah, next week I will give you dating advice on how to mix women and horseracing.”

He laughed, “Now THAT is insane.”