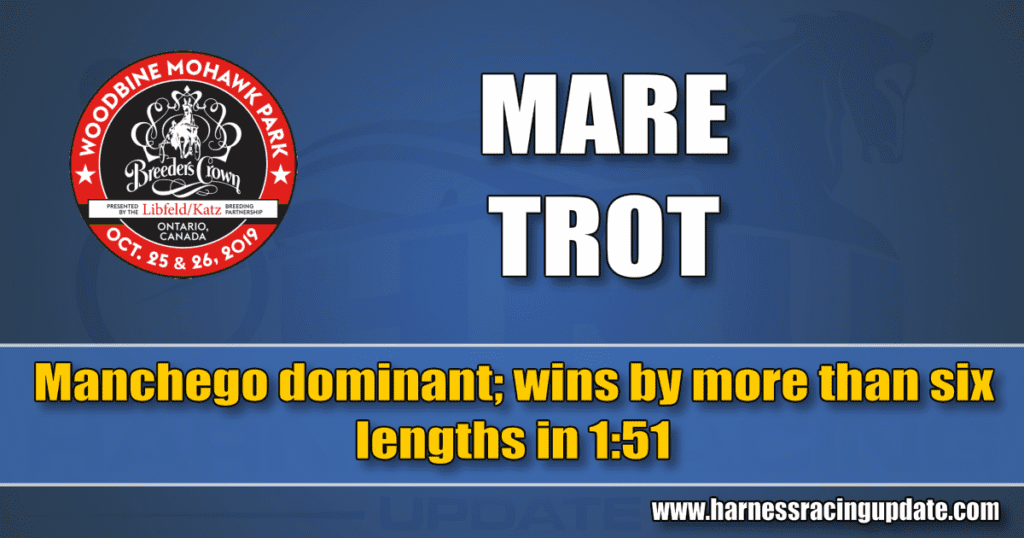 Manchego dominant; wins by more than six lengths in 1:51

When Ron Burke, who trains Atlanta, opted to enter the Maple Leaf Trot runner-up and 2018 Hambletonian winner in the Breeders Crown Open Trot, he made a statement. He literally called double world champion Manchego the best horse currently racing, and opted to send his mare against males instead in the Mare Trot. Atlanta just happens to be the fastest trotter in Canadian history, courtesy of her 1:50.2 tour of the Woodbine Mohawk Park track on June 15.

#4 Manchego (4, 1:49.0m; $1,939,355) is the fastest female trotter in international history, on account of a blistering personal best, set in the Allerage Farms on Oct. 6 at Red Mile. The 4-year-old Muscle Hill—Secret Magic (by Cantab Hall) daughter tallied six wins over 14 races this year, building a four-race string of victories on her way to the Breeders Crown. Her front-end wins over four different tracks have come against males and females, highlighting an adventuresome campaign put together by owner Black Horse Racing of Lebanon, NJ, and trainer Nancy Johansson. For race 3 of #Crown19 Saturday, Dexter Dunn was back in the race bike behind the 2018 Hambletonian Oaks star and multiple world record holder.

With any number of possibilities for how the event would unfold, Manchego and Dunn remained single-minded. Emoticon Hanover and Dube charged to the earliest of leads, with Manchego in hot pursuit and eager to cut the mile. By the opening quarter, Dunn’s mare was doing just that–reaching that point in a track-record-matching 26.1, with Emoticon Hanover settled behind her and Hannelore Hanover taking her chances first up. The remainder of the mile was a trying one for the parked-out Hannelore Hanover, as Manchego controlled the race to the 55.3 half, with the two-time defending Emoticon Hanover pocketed up to the inside in second. By the three-quarter pole, the leader was into what track announcer Ken Middleton termed “another gear”, trotting the last fractions in 1:23.4 and a winning 1:51 flat stake record “masterpiece.”

Post-race, a mud-spattered Dunn told interviewer Greg Blanchard, “She certainly makes my job easy… The last half of this season, she’s just exploded… She won great on Hambo Day. (Then) they gave her a little break, just to freshen up, and now she’s won five in a row.”

The New Zealand native was understandably thrilled by his first win of the card: “I probably have to pinch myself a little, but really, it’s hard to believe… It’s been a great ride.”

Katie Remmerswaal is caretaker for Manchego, who sold under the name “Whispering Hills” at the 2016 Lexington Select Yearling Sale for a $120,000 price tag. The half-sister to In Secret (6, 1:52.3f; $813,657) was bred by Brittany Farms LLC of Versailles, Kentucky. Secret Magic (3, 1:54.4f; $198,260) is a Hanover Shoe Farms broodmare out of Chorine Hanover; Manchego is her third, and most accomplished, foal. Secret Magic’s 2019 Muscle Hill colt Stilton Hanover is a full brother to the newly-crowned Breeders Crown Mare Trot champ.

Even on the heels of a place finish, Emoticon Hanover’s conditioner Luc Blais expressed his gratitude. “I’m happy, I think so, from the 10-hole,” said Luc Blais. “Everything turned right, and gave (driver Dan Dube) a chance to be in the race, and turned out very well. The 10-hole, you have to leave a little bit and see what’s going on. That’s the driver’s plan. After that, he’s got the controls.”

Seven lengths behind the dominating Manchego at the Crown finish, Determination’s mare was ready for the next battle, whatever the post position: “That’s a very nice mare. We’re going to the TVG, for sure,” confirmed Blais.