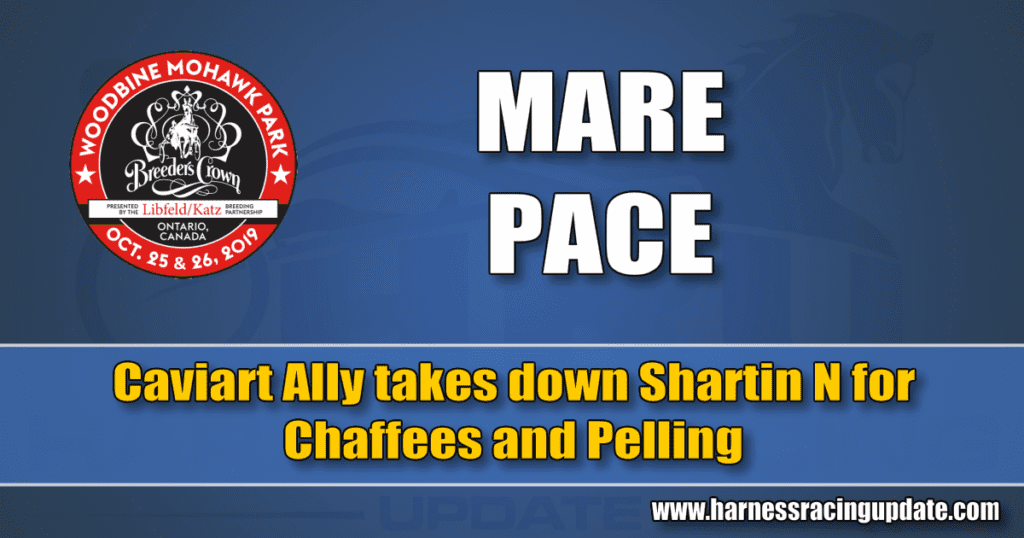 Caviart Ally takes down Shartin for Chaffees and Pelling

It was already setting up for an evening of randomness: As the rain began, race 1 saw a narrow photo finish decided in favor of #10 Classic Pro (Bob McClure), at odds of 67-1. A racing surface rated “fast” and a prohibitive favorite leaving from the inside post would put the handicappers’ world back on its axis of normalcy in race 2. Maybe. Maybe not.

A victory lap for the presumptive 2019 Horse of the Year, or a chance for others to set her Crown askew? These were the questions going into the $393,000 Breeders Crown Open Mare Pace, as #1 Shartin N (p, 6, 1:56.4m; $2,067,957) looked to build upon a 14-win season against her toughest divisional competition. The Tintin In America—Bagdarin (by Live Or Die) mare displayed rare hints of late-season vulnerability, such as being scratched sick from the Sept. 21 Milton Stake at Woodbine Mohawk Park, and giving way to Caviart Ally in the Oct. 7 Allerage Farms Filly and Mare Pace at Red Mile. Teamed up with regular reinsman Tim Tetrick, Richard Poillucci, Joann Looney King, and Tim Tetrick LLC’s, the reigning Dan Patch Pacing Mare of the Year had a 2018 Breeders Crown title to defend. But capturing this year’s edition would seemingly secure the Jim King Jr.-conditioned import’s bid to become the first-ever older pacing mare to be voted Dan Patch Horse of the Year. She had, after all, become the sport’s fastest distaff pacer and co-fourth-fastest pacer ever in the Lady Liberty on Hambletonian Day.

#3 Caviart Ally (p, 5, 1:48.0m; $1,672,633) looked most likely to topple the queen in the final, which had required no eliminations. Owned by Caviart Farms of Vienna, VA, the Bettors Delight—Allamerican Cool (by No Nukes) daughter finished second in her previous matchup with Shartin N — an Oct. 18 qualifier at The Meadowlands, clocked in 1:51.2 — but she had handed the champion an unexpected defeat in the Allerage. Driver Andy McCarthy enjoyed two double-digit upsets in Friday night’s 2-year-old Breeders Crown finals, handling 15-1 Ramona Hill (Two-Year-Old Filly Trot) and 27-1 Reflect With Me (Two-Year-Old Filly Pace) for back-to-back victories for trainer Tony Alagna. Caviart Ally, a Brett Pelling trainee, was the most logical choice to succeed Shartin N, if the latter was not at her best, or if randomness entered into the equation.

Despite the sparse field of seven, this final was no two-mare grudge match, nor an exhibition race for the mighty Shartin N. #4 Youaremycandygirl (p, 3, 1:48.2m; $1,159,677) who was a Two-Year-Old Breeders Crown Filly Pace champion recorded three seasonal victories in 13 starts prior to the Oct. 26 divisional showdown, and prepped for Saturday with an unusual tightener Oct. 19. The 4-year-old American Ideal—Sweet Lady Jane (by Somebeachsomewhere) daughter was a competitive show finisher in the Woodbine Mohawk Park Preferred, timed in 1:50.2 and beaten only by Breeders Crown Open Pace combatants Jimmy Freight (second) and Dorsoduro Hanover (first). Racing for owner William Donovan of Delray Beach, Florida; trainer Richard Moreau, and driver Louis-Philippe Roy, Youaremycandygirl loomed a dark horse threat in the Open Mare Pace.

Race 2 delivered on the stellar credentials of its top pair, but not as the win pool predicted. #7 Kissin In The Sand (Yannick Gingras) blasted from the outer post to clear Shartin N into the first turn, but Tetrick’s charge had little patience for the pocket and looped to make front by the 25.5 first quarter. The leaders were tracked single-file by #2 Kendall Seelster (Jody Jamieson) and a fourth-place Caviart Ally as a confident Shartin N led the way to the 55 flat half. McCarthy sent his mare first over to challenge, drawing alongside the #1 at the three-quarters, reached in 1:22.3. The battle of the incumbent Crown queen and the rising heir apparent developed through the stretch drive, in which Caviart Ally looked Shartin N in the eye and then established a two-length victory margin by the wire. The 1:49.3 win represented a 5-2 win at the windows, but something much more for breeder Hanover Shoe Farms and owners Buck and Judy Chafee of Caviart Farms.

Buck Chaffee said that his distaff pacing star missed the first Breeders Crown to which she was eligible, at age two. “Not the first year, and we kick ourselves for not (entering), because we didn’t think she was quite ready that year. Then, the winner of the Breeders Crown beat us by a nose in the Kindergarten final the week after. That made us think, ‘Why didn’t we do it?'” In 2019, Caviart Ally’s evolution has been undeniable, confirmed her elated owner: “She’s been second twice, and (she’s) been a different horse. Shartin last year, and Blazing Britches the year before are both really good mares, and she was really competitive, but this is the first time that she got the best of them (in the Breeders Crown final).”

Judy Chaffee added that both her own mare and Shartin N turned in extremely game performances. “They are both terrific, and you can’t fault either of them. Last year, Ally had the 9- or 10-hole; she was on the outside and she only lost by, I think, half a length. It was so close.”

Conditioner Pelling, who last won a Breeders Crown in 2005 before retiring, said he is already savoring 2020 as part of his return to the upper echelons of the sport. “I’ll get to bring (Papi Rob Hanover) and Caviart Ally to the Breeders Crown next year, so I’ve already got two Breeders Crown horses for next year.”

He said it has taken more than he would have liked to re-establish himself.

“I’ve said to some people, the business has shrunk a little bit. A lot of the owners I had before are in partnerships, plus there’s only ‘x’ amount of really strong buying stables out there,” Pelling said.

He wasn’t sure whether his latest win as a trainer represented a personal comeback milestone, but there’s no doubt that he’s back.