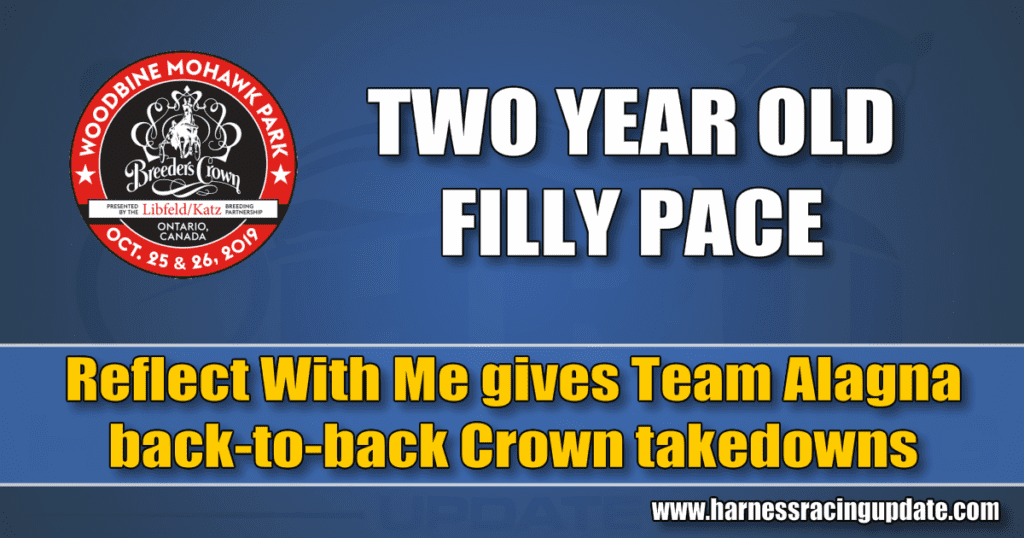 The pairing of trainer Tony Alagna and driver Andrew McCarthy did not have much time to reflect on Ramona Hill’s 14-1 upset in the Two-Year-Old Filly Trot.

With the three elimination winners succumbing to quick fractions, Reflect With Me catapulted from fourth over down the center of the course to nail Lyons Sentinel at the finish and win the C$786,000 Breeders Crown 2-year-old filly pace.

“It’s just an unbelievable evening,” said Brad Grant, who co-owns both Ramona Hill and Reflect With Me. “It kind of got rough off the turn, there, she got shoved four-wide, but Andrew had the faith in her all the way along so… I didn’t know if she got there or not, but I listened to the consensus upstairs and everybody said (Reflect With Me) did.”

Reflect With Me left the gate at 27-1, the fifth longest shot on the board. She sat seventh by 13 lengths to the quarter while 2-1 second choice Priceless and even-money favorite Lyons Sentinel battled on the lead. Stalking fractions of :26.4, :53.3 and 1:22.1, driver Andrew McCarthy uncorked Reflect With Me off the final turn and surged through the stretch with a :27 final quarter to get a neck up on Lyons Sentinel at the finish.

McCarthy’s drive differed from his attack in the race prior, where he sent Ramona Hill for the front from post 10.

“Well, they are two different horses,” McCarthy said of the different strategy. “Ramona Hill, I honestly thought she was the best horse in the race, so I wanted to get her in play, whereas Reflect With Me, she’s a little better off the pace, so it just worked out that it was such a big first half and we could close into it.

“I wasn’t sure if I was going to be able to reach or not, but she’s such a fast filly.”

With five victories from 11 starts, Reflect With Me has earned $621,543 for owners Brad Grant and Brittany Farms LLC, which bred and bought into the $120,000 yearling purchase who sold as Hip #1 at the Lexington Selected Sale last year.

“She was number one in the sale and Brad (Grant) and Tony (Alagna)loved her, and this was even before we put the Hip numbers on the horses,” Art Zubrod of Brittany Farms said. “We thought ‘one’ would be a good spot for her and thank God we got a partnership with Brad on this horse.
“She had been a favorite of ours and we were very confident coming into this race. I know other people weren’t, but we were.”

The victory gave driver Andrew McCarthy his second Breeders Crown win after the Australian native collected his first the race prior. Trainer Tony Alagna now has five Breeders Crown victories after winning his last in 2017 with Stay Hungry in the freshman pacing colts’ final.

Reflect With Me and Ramona Hill’s wins came as the first two of the 12-race end-of-season championship.

“Got to start off with a bang and get them out of the way early, you know?” Alagna said.