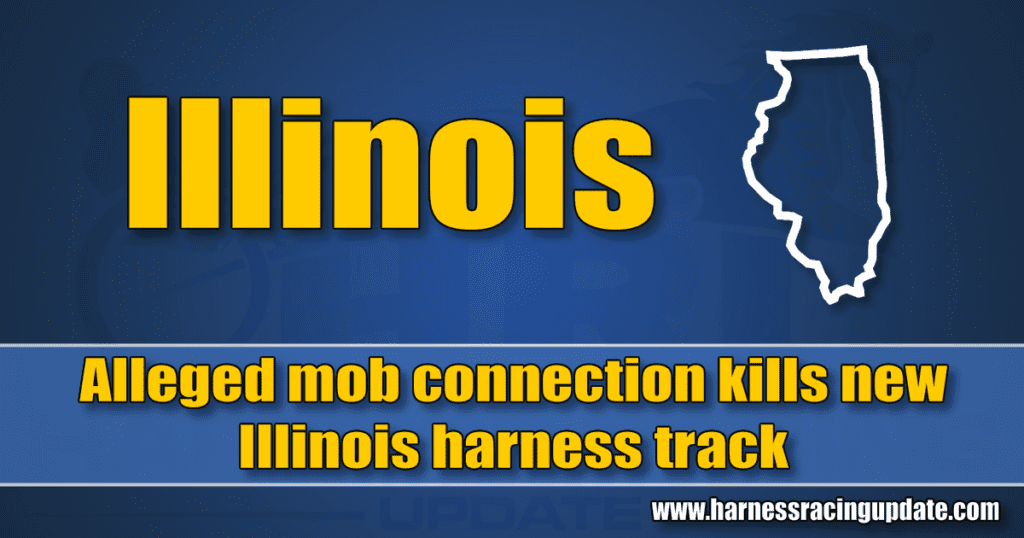 Rick Heidner, the man that proposed building a racino in the Chicago suburb of Tinley Park, said, “I have no relationship with the Mafia at all.”

It seemed too good to be true…and it was.

Three weeks after approving the application for a 12-night inaugural meeting in December, 2020 for a harness track/casino to be built in the far south Chicago suburb of Tinley Park the Illinois Racing Board was forced to rescind and amend the dates order on Oct. 15.

As a consequence of the decision that arose after a letter from Governor J.B. Pritzger’s office informed the village that the state-owned land on which the racino was to be built is no longer for sale, Illinois harness horsemen remain in the same dire situation they’ve been in since the bankrupt sister harness tracks Balmoral Park and Maywood Park were shut down in 2015.

Hawthorne Race Course is the state’s only standardbred venue and the harness horses have to time-share with the thoroughbreds.

Heidner is a real estate developer and a video gambling entrepreneur. His Gold Rush Gaming is the state’s third largest video gambling operator with more than 500 slot machines in bars and restaurants.

Tinley Park had intended to buy the state-owned land that was the site of the shuttered Tinley Park Mental Health Center from the state and resell it to Heidner’s Playing in the Park LLC.

Hawthorne Race Course president Tim Carey was partnering with Heidner in the venture.

“The legislature included the opportunity to develop a new racino as part of Illinois’ gaming expansion because such a facility is vital to the survival of the racing industry and the thousands of jobs that it supports,” he said.

“We are going to work with all industry stakeholders, elected officials and regulators to determine new options to bring this to fruition.”

The relationship of Heidner and Suspenzi and Heidner’s relationship with Dominic Buttitta, who in 2012 pleaded guilty to sports bookmaking and tax evasion, came to light following weekend FBI raids of the home and office of state Senator Martin Sandoval and the offices of two suburban mayors, Christopher Getty of Lyons and Jeffrey Tobolski of McCook (who also is a Cook County commissioner).

According to Chicago Sun-Times’ sources, “many of the same names surface in the paperwork resulting from each of the searches,” including that of Heidner.

The Tribune reported that Heidner and Suspenzi have borrowed millions of dollars from Suspenzi’s bank in deals for convenience stores and gas stations in several states.

However, the 59-year-old Heidner hasn’t been charged with any offenses and since 2012 his Gold Rush Gaming license applications have repeatedly been approved by the Illinois Gaming Board.

“I have no relationship with the Mafia at all.

“My intentions were always good. My name has always been good. Fifty-nine years — all I have done for 45 at least is help everyone I can and do everything I can to be a good man. It’s heartbreaking for me to be attacked like this. People around me are in pain.”

“It’s a very difficult situation,” said Tony Somone, executive director of the Illinois Harness Horsemen’s Association. “We’ll take a breath and see how it plays out.

“As horsemen we’ve done so much of the lifting already to get this potential racino into Illinois and now I don’t know what we’re supposed to do. We can’t build our own racetrack; we can’t build our own racino. The dates application was contingent on Playing in the Park having a physical location and, since the governor’s office said they weren’t going to sell the property to Tinley Park, the village subsequently couldn’t sell it to Playing in the Park.

“So, the Racing Board had no choice but to rescind the previous dates order and amend it.”

In addition to aspiring “to build the finest standardbred complex in the country” and companion casino, Heidner had hoped to build a hotel and an entertainment complex on the property.

“The Village of Tinley Park was blindsided by the recent allegations in the media over the weekend related to Rick Heidner,” Niemeyer said in a statement. “The village is currently assessing its options going forward.

“We still strongly believe the racino is an outstanding project that will bring significant jobs and tax revenue to the state, the south suburban region and the village due to its superb location and other tourism-related facilities in the area.”

The rescinding of the December 2020 dates awarded to the proposed track in Tinley Park has no bearing on racing at Hawthorne next year and Carey’s $450 million development to construct a casino at the family-owned racetrack.

Hawthorne’s 92-program harness meeting will begin Feb. 15 and continue through Sept. 20 after which the track’s 37-program thoroughbred meeting will extend from Oct. 1 through Dec. 31.

With the blessings of the Illinois Thoroughbred Horsemen’s Association, the track won’t hold its customary spring thoroughbred meeting in order to accelerate daytime construction of the second floor casino that it hopes to open in the fall of 2020.

At the September dates hearings Carey said he planned to go back to the traditional schedule in 2021 with Hawthorne holding thoroughbred meetings before and after the meeting at Arlington International Racecourse.

Arlington and its parent company, Churchill Downs, Inc. (CDI) were hauled on the carpet during the dates hearings because of their decision not to apply for a casino license to help fund purses, which was the intent of the portion of the massive 2019 gambling expansion bill that dealt with the state’s racetracks.

CDI claimed the decision was made because the taxes to fund purses were “financially untenable” but consensus among racing insiders is the real reason is because in 2018 CDI spent $326 million to acquire a 62 per cent share in nearby Rivers Casino, the most profitable of the 10 casinos currently operating in Illinois. The rationale is that because Rivers Casino is located only 14 miles from Arlington and CDI doesn’t want the racino competition.

In August, CDI’s chief executive officer, Bill Carstanjen, said the gambling goliath is committed to conducting meetings at Arlington in 2020 and 2021 but beyond that may consider building a racetrack elsewhere in the Chicago area or elsewhere in the state, leading to speculation that the state’s premier racetrack is destined to become a real estate development. Insofar as building a replacement thoroughbred track is concerned it isn’t a financially feasible investment because there are no viable locations in Illinois.

In the current environment, if Arlington were to close or be denied racing dates, it would create a dilemma for the Racing Board and thoroughbred and standardbred horsemen because Hawthorne would be the only track in the metropolitan area.

“Had the Tinley Park facility been built, Chicago would have had plenty of thoroughbred and harness racing options year-around furnished by these two tracks (Hawthorne and Tinley Park), and the sport wouldn’t have to be concerned about CDI’s threats or decisions,” lamented Racing Board member Tom McCauley.