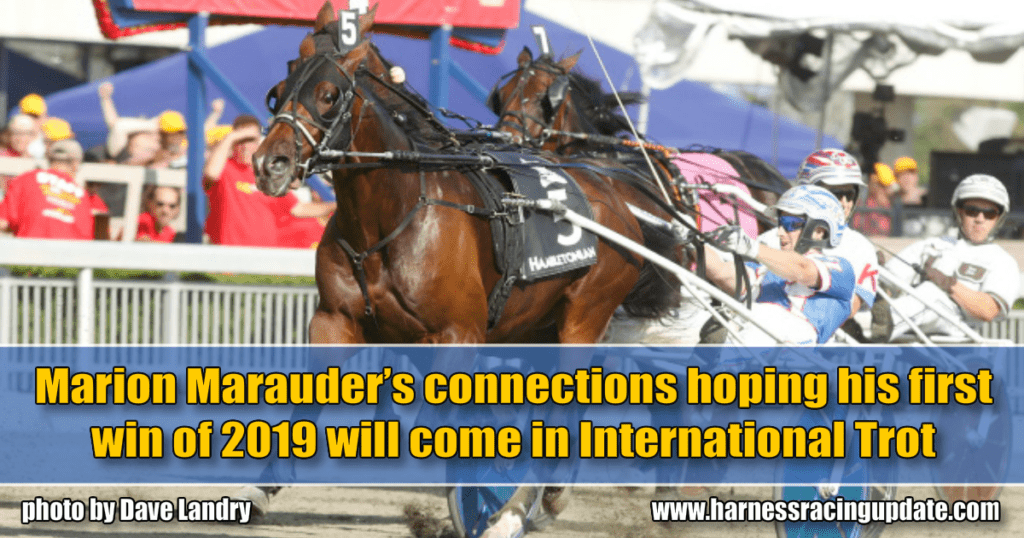 As 2016 Triple Crown champion Marion Marauder nears the end of a bumpy, (so far) winless season, trainer Paula Wellwood hopes he finds his form in time to represent Canada well in the $1 million International Trot on Saturday at Yonkers Raceway.

“We have faith in our horse, for sure,” Wellwood said.

Although the 6-year-old son of Muscle Hill—Spellbound Hanover is beloved by everyone who regularly comes in contact with him, this season has been marked by assorted setbacks leading to a 0 for 8 record with two second-place finishes and one third-place showing. His earnings of $78,525 are relatively meager when compared to his lifetime bankroll of $3,219,405.

Marion Marauder has been playing catch-up since the spring, when he became entangled in a fence at a farm in New Jersey. He injured a hock and a shoulder, the severity of those injuries only becoming clear over time.

When the trotter was ready to compete, nothing quite went his way. He relies on a solid pace to set up his strong closing kick.

“I think the horse is kind of frustrated,” Wellwood said. “But, so far, it hasn’t broken his will.”

Driver Scott Zeron knows racing is a game of patience, and he has stayed the course.

“It took a little bit to correct a few things that were bugging him. You could see he would get a bit bumpy down the stretch,” Zeron said. “But it was never for lack of effort or trying. He still has the will to go out there and win. The times I felt he was on top of his game, I could never find the right trip with him.”

In keeping with the way pretty much everything has gone this season, Marion Marauder enters the International having not raced since Sept. 20. He was scratched from his last scheduled start, in an open trot on Sept. 30, when he spiked a slight fever.

“He’s part of our family, so we take care of him unbelievably,” Wellwood said. “When he’s not right, Marauder does not race.”

According to Wellwood, the horse is training well for his third International start. He owns second- and fifth-place finishes in the event the previous two years at a half-mile oval that has been to his liking throughout his career. He drew the rail for each of his first two cracks at the International, which was not to his benefit because he lacks quickness away from the gate.

Last year’s International turned into quite a misadventure because the talented Zeron found himself on the early lead, a place he definitely did not want to be.

“I would never have predicted being in front by the half,” he said. “But it was a matter of a couple of breakers in that first turn. It changed the whole outlook of the race.”

The early advantage simply did not fit the way Marauder wants to get the job done.

“He just feels like a horse that when he gets to look at somebody, he wants to go by them. He knows what his job is,” Zeron said. “Up front, he can get a little lackadaisical.”

This year, Marauder drew post six in a field of 10 that is headed by the speedy Atlanta. She and driver Yannick Gingras will leave from post three as the 3-1 morning-line favorite. The 41st International, and fifth since the race was revived after a 20-year hiatus, attracted horses from nine nations.

“Atlanta is the horse to beat,” Wellwood said, “but I don’t know if she’ll get her own way. These European horses race different. You don’t get to steal soft fractions. They are usually right on you.”

Zeron is optimistic that he will get the strong pace he needs for Marauder to be at his best.

“Every time he goes behind the gate, he’s a factor,” the driver said. “I just feel the six hole and all, it shouldn’t matter. We’re going a mile and a quarter. He’s been very good at this racetrack. If I could find the right trip, maybe take a few shortcuts, it’s a horse race. Anything could work out in our favor and I feel he will give me 100 per cent effort, no matter what.”

Wellwood is realistic about Marauder’s prospects in the International, which is expected to go off at 3 p.m. on Saturday. “We just hope he represents us well,” she said. “Sure, we’d love to win it, but it’s a very tough field and we understand that. We never put heavy expectations on him. He’s been too good to us.”

Whatever happens in the International, the $6 million Breeders Crown at Woodbine Mohawk Park is scheduled to complete Marauder’s season. His future will be evaluated after that.

“I would think, at most, if we continue to race him it would only be for next year and that would be it,” Wellwood said. “We won’t push him past seven. We wouldn’t do that.”