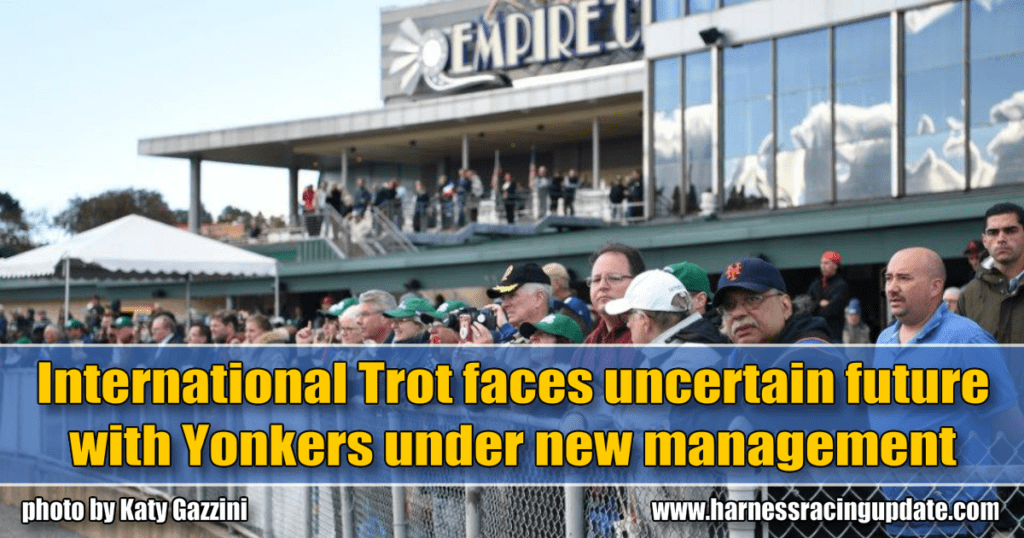 The $1 million International Trot faces an uncertain future beyond the 41st renewal on Saturday at Yonkers Raceway.

“We absolutely hope that it works for us,” said Domingo. “There was some early sentiment that we wouldn’t have it this year. We want to give it a fair shot, absolutely.”

MGM Resorts purchased the casino and racetrack from Tim Rooney for a reported $850 million in a deal that closed at the end of January. The International began in 1959 at old Roosevelt Raceway and went into a 20-year hiatus before Rooney, eager to recapture the event’s glorious past, revived it in 2015.

According to Joe Faraldo, president of the Standardbred Owners Association of New York, Rooney and former general manager Bob Galterio played integral roles in persuading MGM officials to give the mile-and-a-quarter classic at least this year.

“There was some doubt. I had spoken to Tim Rooney and Bob Galterio and they had said they were urging MGM to go forward with it,” Faraldo said. “I think their help in convincing them was important and got us to where we are.”

Faraldo said Rooney was so convinced of the value of the International Trot as a means of restoring some cache to Yonkers Raceway that he invested anywhere from $350,000 to $500,000 in out-of-pocket expenses to provide first-class accommodations and entertainment and make the race as attractive as possible to horsepeople from Europe.

To help fill the void created by the departure of the aging Rooney, Faraldo said the Standardbred Owners Association of New York is spending approximately $140,000 to assist MGM with hotel space in New York City, entertainment that includes a cruise around Manhattan and other expenses ranging from giveaway caps to flags.

“Since it is a transitional period for MGM Grand to learn something about the sport, I don’t want them to drop the ball during this transitional year,” Faraldo said. “I want to let them see what the event is and hope they will have more of a commitment to it in the future.”

The United States contingent is comprised of Atlanta and Guardian Angel AS. Atlanta, the top-ranked older trotter in North America, received post three in Tuesday’s draw for post positions and was established as the 3-1 favorite. She will be driven by Yannick Gingras. Guardian Angel AS, who will be guided by Tim Tetrick from post nine in the field of 10, is second choice at 4-1.

Post time for the International is set for approximately 3 p.m. The matinee card also features the Harry Harvey Trot and the Dan Rooney Pace, each carrying a $250,000 purse.

When Faraldo was asked why he views it as important to continue the International, he said, “Every racetrack needs a marquee event. The International Trot is a marquee event not only in the United States or North America, but globally. The people in Europe view this event as the world championship of trotting.”

Domingo described racing as “a new industry for us.” To help with the transition, Alex Dadoyan, who had been executive director of the Standardbred Owners Association of New York, was hired as director of racing in an announcement made on Sept. 18.

“Alex has a great reputation in the industry as not only a respected businessperson but as someone who understands betting and the betting side of the business,” Domingo said.

Dadoyan has enjoyed a good relationship with Pari Mutuel Urbain, which will commingle wagering pools as it simulcasts the International throughout Europe. “That’s big because the pools will be bigger,” Faraldo said. Larger pools are critical to attracting major players.

While Rooney was somewhat forgiving if the International’s bottom line was lacking, MGM Resorts may not be.

“So everything has to come down to whether it’s a good business decision. But, again, we think that there is absolute entertainment value, and we think there is value to the history of racing that this race brings. We’re excited to be hosting it for the first time.”