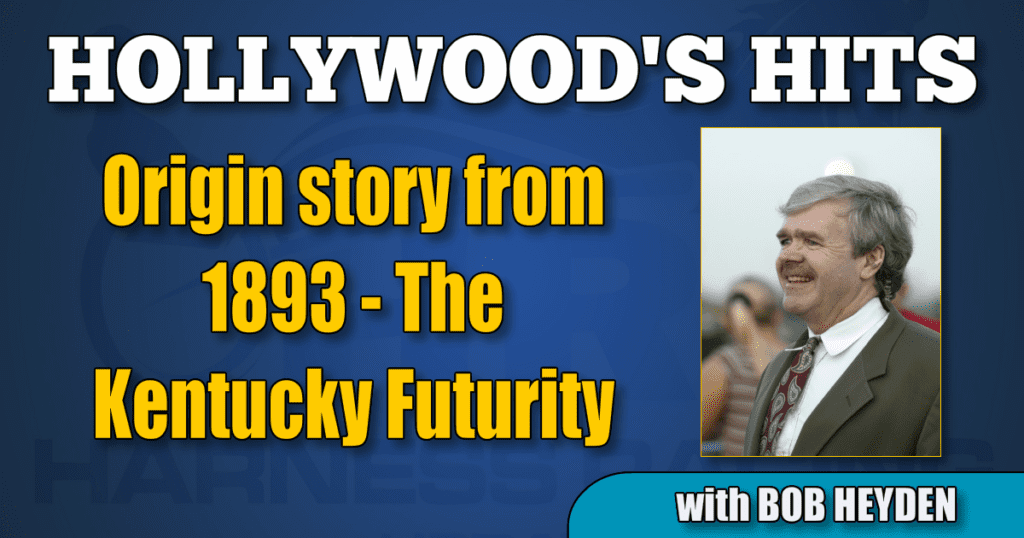 Origin story from 1893 – The Kentucky Futurity

The inaugural race came one year after Arden Homestead was formed, five years before Fasig-Tipton.

The outstanding moment of the inaugural meet was turned in by Arion, a 4-year-old who won an Exhibition in 2:07.3/4

What was the world record at the time The Red Mile opened its doors? 2:04 flat by Nancy Hanks.

Also on the books — can you believe this? — was a nine-heat world record holder named Alix.

In 1893, horses blinders were on occasion referred to as ‘disgraceful adjuncts.’

Medio won the first two of the five-heat contest, but had to settle for second money. The Conqueror was third.

Winning bloodline. Orio Wilkes was sired by Sable Wilkes and was out of a Director mare.

John A Goldsmith was the winning driver.

How did the industry look upon the first ever Kentucky Futurity, and what was it called then?

Shebestingin is coming up on the sixth anniversary of her 1:47 epic mile, the 3YOFP standard in the sport.

Sept. 29 marked 35 years since the death of Joe O’Brien. He is the man who posted a 1:52 flat time trial with Steady Star for a speed standard in 1971 that would last until Niatross lowered it in 1980. O’Brien also drove Scott Frost over the surface at the Red Mile to the very first Triple Crown (1955) and the first of his two
Horse of the Year seasons.

Sept. 28 marked 144 years since the opening of the Red Mile — a three-race card in 1875, just a few months after the first Kentucky Derby was contested. Odd Fellow won the first race in 2:44.1/4 on that Tuesday afternoon, just a decade after the Civil War came to an end.

Greyhound’s; 1:55.1/4 trotting time standard was set at the Red Mile. Did you know that four days later he duplicated that time, but since it was to BEAT 1:55.1/4 it was considered a ‘losing’ effort.

No Triple Crown race has been in existence longer than the Kentucky Futurity.

The first year for the Red Mile was the last year of the life of Hambletonian, the horse considered the father of the standardbred.

Goldsmith Maid’s 2:14 mark was the gold standard when the doors opened 144 years ago.

The first grandstand collapsed in 1892 and the second one burned down in 1931.

When Billy Direct set the new speed standard of 1:55 flat in a time trial in 1938, did you know that he competed in a race earlier that day?

All in the Family

Billy Haughton never drove a winner of the Kentucky Futurity but his sons did — three times:

This year marks the 45th anniversary of the first six-figure purse in Kentucky Futurity history — Waymaker was driven to victory by John Simpson Jr. in 1974.

Mike Lachance’s last two Kentucky Futurity drives at 61 and 62 were both victories:

The 1952 Hambletonian and Kentucky Futurity were won by 74-year-old Bion Shively driving Sharp Note. They were his first two (and only two)Triple Crown race wins! Fifty-four years earlier he fought in the Spanish American War in 1898.
Kentucky Futurity Fillies – by the numbers

In the 1972 Kentucky Futurity, with just five entered, Songcan TWICE stepped on and flattened the tire of favored Super Bowl, who went on to win anyway and nail down the Triple Crown.

Ben White drove an incredible seven winners in the Kentucky Futurity — five of those fillies.

Four came prior to the debut of the Hambletonian and three after:

The Tattersalls Pace was started in 1971 and in the first 40 years a Canadian-born driver won 32 times — and that includes divisions.