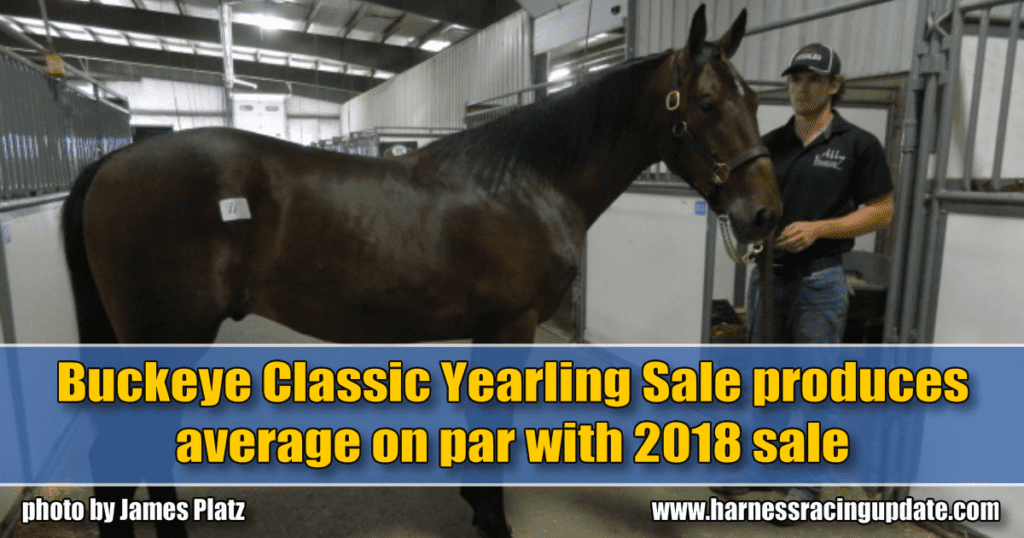 The fifth edition of the Buckeye Classic Yearling Sale took place Tuesday (Sept. 24) at the Champions Center Expo in Springfield, OH. A catalog of 207 yearlings were consigned to the sale, conducted by Hoosier Classic Sale Company LLC, with 196 passing through the sale ring during the course of the day. That group combined to sell for a gross of $1.65 million, good for an average of $8,435. Last year’s Buckeye Classic saw 184 babies gross $1.54 million and average $8,409.

“I’m pleased with the sale,” said sale manager Steve Cross. “We sold 12 more yearlings than in 2018 and the sale average remained relatively unchanged. I was very encouraged by the number of first time buyers that came out and bought yearlings. There were a lot of new faces and new buyers.”

All told, seven yearlings brought $20,000 or more, with the session topped by Forged Steel, cataloged as Hip 91, and bringing a final bid of $29,000. The bay colt is the first foal out of Ohio Breeders Championship final winner Bell Flower, p,4, 1:52.4f ($251,509). Consigned by Abby Stables, Forged Steel is from the first crop of Bettors Delight stallion and millionaire Domethatagain. Ryan Miller of Greenville, OH signed the ticket as agent.

A trio of yearlings in the Abby Stables consignment brought $20,000 or more. Fanciful Invention, a Triumphant Caviar filly out of Merrie Anabelle final winner Reinvent, was hammered down for $25,000. The yearling is a half-sister to Refined, who earned just over $100,000 since the filly was cataloged as Hip 24. Chris Beaver signed the slip. Hip 138, Filly Named Pete, brought $20,000, purchased by agent Danny Collins. The Uncle Peter yearling is out of Escadilla, a mare that has produced four winners from five foals.

“I’m very satisfied with the sale,” said Marion “Beach” Beachy of Abby Stables. “It was great to have the sale topper. It was the first crop of Domethatagain selling. The sale probably exceeded my expectations. I was hoping to average between $10,000 and $12,000 and I think we did that.”

Two Shades Of Brown, a Mr Wiggles filly consigned by Clearview Stables, turned out to be the second-highest pacing yearling sold during the Tuesday session. She is out of Somebeachsomewhere mare Sneacret Hanover, half-sister to Breeders Crown elimination winner Sutter Hanover p,3, 1:50.1s ($885,689). Kirk Nichols of London, Ohio, bid $19,000 for the bay, cataloged as Hip 36.

Ohioan Chris Beaver was the most active buyer at the sale, signing tickets on seven yearlings and spending $106,000. Besides Fanciful Invention, Beaver purchased three other babies sired by Triumphant Caviar. He bid $18,000 apiece for Hip 73, filly Hot Ice, and Hip 115, ridgling Final Class, both consigned by Abby Stables. He also paid $13,000 for Hip 163, Irish Princess. Part of the Brushy Acres consignment, the filly is the first foal from a Lucky Chucky mare that is sister to a trio of $100,000 winners.