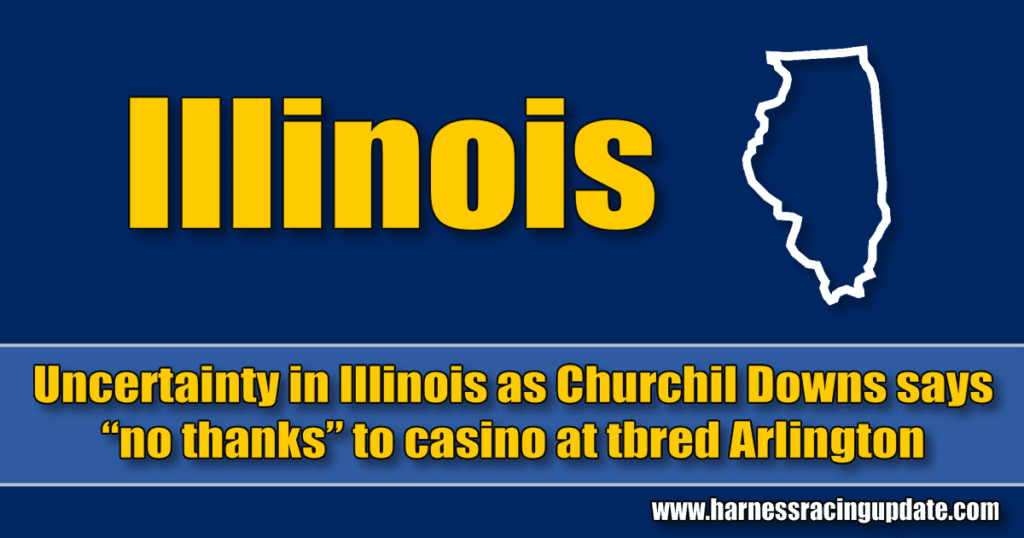 Churchill Downs draws ire of Illinois Racing Board after saying “no thanks” to having a casino at thoroughbred racing’s Arlington Racecourse, throwing harness racing’s 2020 schedule in the state into turmoil. At the same meeting, Rick Heidner outlined plans to make a new track in Tinley Park into “the finest standardbred complex in the country.”

While the long-range Illinois harness racing forecast appears to be very favorable, suddenly there’s an air of uncertainty swirling around the 2020 dates.

The Illinois Racing Board held its annual dates hearings on Tuesday (Sept. 17).

Traditionally, the schedule is voted on and drafted the same day, but this time the hearings were continued until the following Tuesday (Sept. 24) because of a controversy involving Churchill Downs, Inc. (CDI), parent company of the thoroughbred track Arlington International Racecourse.

The fate of the 2020 harness schedule at Hawthorne Race Course and the timing of the opening of the proposed new harness track in Chicago’s far south suburb of Tinley Park hinge on whether or not the board decides to grant Arlington dates.

If Arlington doesn’t get dates, there seemingly would have to be significant alterations to those being requested by Hawthorne.

The passage of massive Illinois gaming expansion legislation this spring permits tracks to add casino gambling and Hawthorne is asking the Illinois Gaming Board for a casino license and making plans to have it open in the fall of 2020.

To put the construction project on the fast track, Hawthorne isn’t requesting its customary daytime spring thoroughbred meeting next year. Instead, Hawthorne wants to hold harness racing from Feb. 15 through Sept. 20. Because harness racing is at night this would enable construction to be done during the day and be nearly completed before the requested Oct. 2 start of a fall thoroughbred meeting that would run through Dec. 26.

Meanwhile, Rick Heidner hopes to open the harness track he plans to build in Tinley Park with a Dec. 6-29, 2020 mini-meeting. He is partnering with Hawthorne president Tim Carey in the venture.

The problem is Churchill Downs, Inc. (CDI) and the corporation’s shocking decision not to pursue a gaming license at Arlington after many years of lobbying lawmakers to allow tracks to become racinos.

Late last year, CDI spent $326 million to obtain a 62 per cent share in Rivers Casino, the most profitable of the 10 casinos currently operating in Illinois. The casino is located only 14 miles from Arlington.

Although CDI chief executive officer Bill Carstanjen has claimed the decision not to apply for a casino at Arlington was made because the taxes to fund purses were “financially untenable” most believe the real reason is because CDI doesn’t want the competition for Rivers Casino. CDI also is among the applicants for a license for a new casino that the legislation permits in Waukegan, just across the border from Wisconsin and less than a one-hour drive from the thoroughbred racetrack.

Carstanjen said CDI is committed to conducting meetings at Arlington in 2020 and 2021, but beyond that, may consider building a racetrack elsewhere in the Chicago area or elsewhere in the state.

No Churchill Downs officials were present at the dates hearings at which Arlington president Tony Petrillo made the track’s presentation. After Petrillo concluded, board member Tom McCauley and board president Jeff Brincat put his feet to the fire.

“Wait a minute,” Brincat told Petrillo. “You’ve been in racing how many years (since 1927) and now you’re saying, ‘We’re good for a couple years.’ That begs a lot of questions.

“This might be the first time in the history of racing when somebody said: ‘You can have a casino’ and the reply was ‘No thanks.’ What does a good environment look like? I’m not asking for gaming purposes. I’m asking for racing purposes. This bears on where Illinois racing is going, which is the only concern of this body. There’s a value we all find in certainty; there’s a value we all find in stability. We’re intent on rebuilding this industry to the extent this bill has made possible. I’m not getting facts.”

McCauley wholeheartedly agreed with the chairman and interrogated Petrillo at length.

“I don’t get it,” said McAuley, who served as Arlington’s legal counsel in the 1980s. “This wasn’t a big surprise when the gaming bill was passed. It was a cause for celebration (by other track owners and the horsemen).

“Saying that ‘Arlington will consider moving its license to another community or another location in the state’ — I’ve never read a more preposterous statement. The award of racing dates is a privilege. I’ve been hearing ‘level playing field’ for decades. Is the same old cliche being reapplied to support this argument? I want to know: What’s an acceptable financial return?

“Who knows how many jobs will not be available because of that decision (to reject a casino at Arlington), a decision that has a detrimental impact on (thoroughbred) purses. Here’s the gorilla in the room: Do you think protecting the 61% investment in Rivers Casino, the highest grossing casino in the state, was part of the decision?”

McCauley cited CDI’s closing of Hollywood Park and its Securities and Exchange Commission filings to support his argument that the corporation is focused on its gaming pursuits to the detriment of its racing holdings. He noted that a mention of the Kentucky Derby was the only reference to racing in the federal filings that painted an increasingly prosperous picture for CDI.

After Petrillo time and again told McCauley and Brincat that he was unable to supply the information on CDI that they were requesting, McCauley made two motions: 1, adjourning for one week to give CDI the opportunity to answer the questions when the hearing resumed; 2, forming an ad hoc committee of the board to consider a hypothetical 2020 racing schedule without racing at Arlington.

“Given where we are and what’s at stake I support these motions,” the chairman said. “This is a massive issue.”

While the IHHA and ITHA are of one mind concerning the importance of an Arlington casino, like Carey, their representatives left the hearings with a feeling of uncertainty.

“I agree with everything that came out but any schedule change for me is a disaster,” said IHHA executive director Tony Somone. “You can’t force them to apply for a casino license. I hope they sell Arlington.

“At Hawthorne we’ve always been accommodating with regard to the racing schedule,” Carey said. “We’ll do that in this case. There is a way.”

Among the possible partial solutions would be ending the Hawthorne harness meeting in mid-summer to give thoroughbred horsepeople a head start on their fall meeting; holding some of these programs at night until major construction is completed; extending the August mini harness meetings at the State Fairs at Springfield and DuQuoin; and opening the new Tinley Park track in October.

During the hearings, Heidner gave the board a detailed rundown on the track he wants to build.

“This is a piece of the puzzle,” Carey said, prefacing Heidner’s testimony. “We have to have another racetrack. The (gaming expansion) act calls for another racetrack (in Chicago’s far south suburbs). This will give horsemen what they lost with the loss of Maywood and Balmoral, year-around live racing. When we’re not racing at Hawthorne we’ll be racing at Tinley Park.”

Heidner said he was the high bidder for Balmoral Park after that track and its sister track, Maywood Park, were forced out of business in 2016 because of bankruptcy but lost out. Since then, Hawthorne has been the only harness racing venue in the Chicago metropolitan area and the standardbreds time share with the thoroughbreds.

“While I was bidding for Balmoral I befriended the horsemen and visited Tim,” he told the board. “When I met with the horsemen and saw how they had been decimated my heart went out to them. We used to drop 2,000 foals yearly in Illinois; last year 140 were dropped. That’s just wrong. I was at the state capital. I met countless senators and representatives.

“Our two Illinois families find this to be an incredible opportunity for both of us and the horsemen. I’ve sold one of my businesses to fund this. This project will flourish in this location.”

The track is to be located on 180 acres, two blocks from Interstate Highway 80. A Metra train station is on the same property. In addition to surface parking there will be a parking garage.

There will be 200 stalls in the stable area and Dan Coon, a well-known track consultant, will oversee the installation of the racetrack itself.

After the track is built a 224-room hotel with a high end restaurant will be built on the premises. The restaurant and the casino will look onto the racetrack.

“Our goal is to build the finest standardbred complex in the country and everything in the complex will revolve around the racing,” he said. “It’s a 2 ½-year project.”

Heidner’s timetable calls for demolition of existing structures on the property to begin in October, building construction to start in December, track construction to begin in March, a local job fair to be held in the spring, completion of the racing surface in the fall of 2020 and the start of qualifying races.

The Racing Board has received no other applications to build the harness racino that the legislation calls for.
Although construction has yet to begin that doesn’t seem to pose a problem for obtaining the December 2020 mini meeting at an unfinished facility.

McCauley pointed out that Arlington received permission to conduct what became known as “The Miracle Million” on Aug. 25, 1985, using temporary bleachers and tents for spectators to replace the grandstand and clubhouse that were destroyed by fire 25 days earlier.

The problem is the impact the possible denial of the Arlington thoroughbred dates application for 2020 next week would have on next year’s Illinois standardbred schedule.