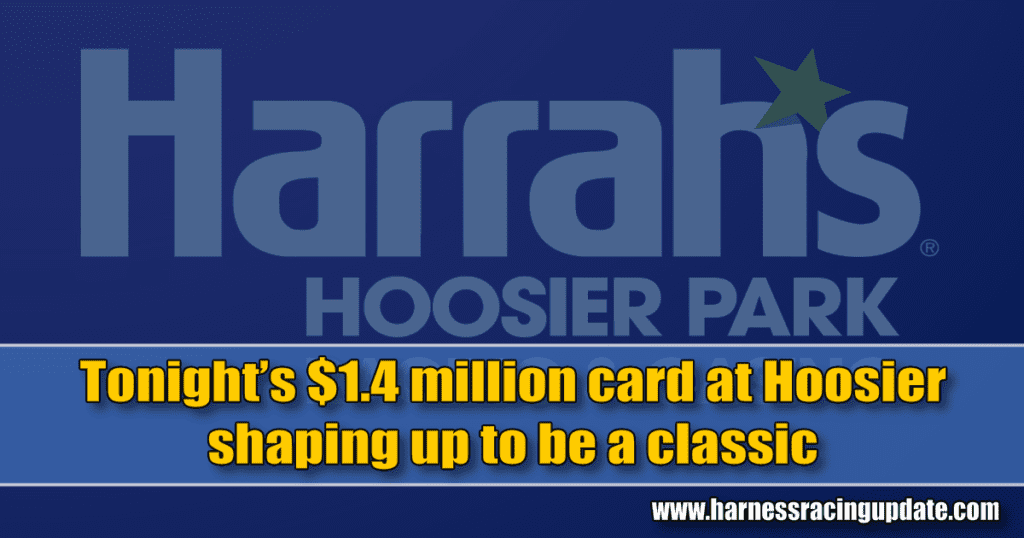 Tonight’s $1.4 million card at Hoosier shaping up to be classic

With a new Jug champion crowned, the focus shifts to Harrah’s Hoosier Park. The Grand Circuit rolls into Anderson, IN tonight with the track featuring a 14-race card boasting more than $1.4 million up for grabs. The majority of those purses will be distributed over seven stakes races, headlined by the $230,000 Caesars Trotting Classic.

Hoosier Park’s richest trotting event attracted a full field of 10, with 2018 winner Marion Marauder set to defend his title against a stellar group that also includes former winner Hannelore Hanover and Maple Leaf Trot victor Guardian Angel As. Marion Marauder, looking for his first win of 2019, has drawn the rail for trainer Paula Wellwood. Hannelore Hanover, on the verge of becoming a triple millionaire, starts from post eight for trainer Ron Burke with Yannick Gingras in the bike. Guardian Angel As will line up in the second tier for conditioner Anette Lorentzon. The Archangel—Provide As 5-year-old enters the Caesars Trotting Classic off a fourth-place effort in the $220,000 Charlie Hill Memorial.

Other top open trotters set to battle in the Caesars Trotting Classic include Breeders Crown champion and Indiana hero Fiftydallarbill (post three), Mission Accepted, third in the Hill Memorial in his most recent start (post six), Hambletonian Maturity and Cashman winner Crystal Fashion (post seven) and Six Pack, twice a winner in 2019, lining up in the outside post. It is slated as Race 11.

McWicked finished second to Lather Up in the Dan Patch Stakes at Hoosier Park in early August. The 8-year-old son of McArdle leads a field of 10 in the $176,000 Harrah’s Hoosier Park Pacing Derby. The Casie Coleman-trained pacer and defending Horse of the Year starts from post four for Brian Sears in the night’s 12th race. Ron Burke has dominated the Harrah’s Hoosier Park Pacing Derby, winning six of the nine previous editions. Tonight, he sends out a trio of free-for-allers in Prix d’Ete winner This Is The Plan (post two), Dorsoduro Hanover, who sports the fastest seasonal time of the field (post three) and Roll With Joe runner-up Filibuster Hanover (post six). Miso Fast has drawn the rail for Virgil Morgan Jr., Jimmy Freight starts from post five, and Endeavor starts from post eight.

Tonight’s card includes a pair of Kentuckiana Stallion Management Stakes for freshman fillies. A group of nine pacing fillies will contest the $230,000 event set as Race 5 on the program. Burke entered a trio that includes Sweet Ace, the fastest filly in the field with a mark of 1:50.4 (post 8), Merga Hanover, the richest filly in the field with earnings of $149,399 (post five) and Shouldabeenatd, a two-time winner lining up in post two. Local favorite Priceless, a winner in four of six starts, will start from post four for trainer and driver Brandon Bates. Beyond Ecstasy, a 1:51.2 winner two starts back for trainer Jim Campbell will start from the outside post for Tim Tetrick.

The $215,000 Kentuckiana division for trotting fillies assembled a field of 10, with all but one starter reaching the winner’s circle in 2019. Crucial, a three-time winner with a 1:54.3 mark for the Burke Stable, lines up in the second tier as the fastest filly in the field. Rock Swan, a Swan For All lass trained by Erv Miller, leads all starters with six wins in seven starts including a four-race win streak at Hoosier Park. Trace Tetrick will guide the freshman from post three. Kikimora, the Ohio Sires Stakes (OHSS) champion and winner of just over $200,000 this season will start eighth for trainer Chris Beaver. The field also includes Pennsylvania Sires Stakes (PASS) championship runner-up Sorella (post one), Queen Of The Hill, a 1:55 winner for Per Engblom (post two), and Champlain Stakes winner Spoiled Princess (post four).

The $170,000 Jennas Beach Boy offers a balanced field of 3-year-old pacing colts and geldings. Several starters boast sub-1:50 marks in 2019, but Century Farroh enters the contest with the most seasonal wins. The Mach Three colt, trained by Dr. Ian Moore, has won 11 of 13 attempts with a speed badge of 1:49.1 and enters tonight’s contest riding a three-race streak. He starts from the second tier for Sylvain Filion. Little Rocket Man, the feel-good story of the Hoosier Park meet, has tallied 10 wins from 14 trips behind the gate while taking a mark of 1:49. He leads a group of six “local” horses entered in the race. Jamie Macomber trainee Rockie Got Framed, a 1:49.3 victor in Indiana Sires Stakes competition, is saddled with the outside post, while Workin Ona Mystery, conditioned by Brian Brown, drew the rail.

Peter Wrenn attempts to make it five straight with Odds On Osiris in the $125,000 Elevation tonight. The gelded son of Rockin Image, trained by Melanie Wrenn for Odds On Racing, started the streak with a victory in the Fox Stake at the Indiana State Fairgrounds. His latest win, a seven-length romp in Indiana Sires Stakes in a time of 1:50.3, established a new Hoosier Park track record. He starts from post two. Joining him are nine other colts including PASS consolation winner Mac’s Big Boy (post nine), Major Betts, twice a winner in four races (post seven), and three-time winners Fox Valley Hustler (post six) and Always And Again (post eight).

A compact field of six will battle it out in the $135,000 Moni Maker for sophomore trotting fillies. Evident Beauty, a 1:53 winner in the $282,000 Elegantimage final, enters the event as the fastest and richest filly in the group. Conditioned by Nifty Norman, the six-time winner has drawn post three for driver David Miller. Julie Miller sends out Special Honor, runner-up to When Dovescry in a Simcoe division, from post three. Indiana products Measuredperfection, victorious in four of six seasonal starts, and Grand Swan, a six-time winner at Hoosier Park, will file in behind the starting gate in posts one and four, respectively.