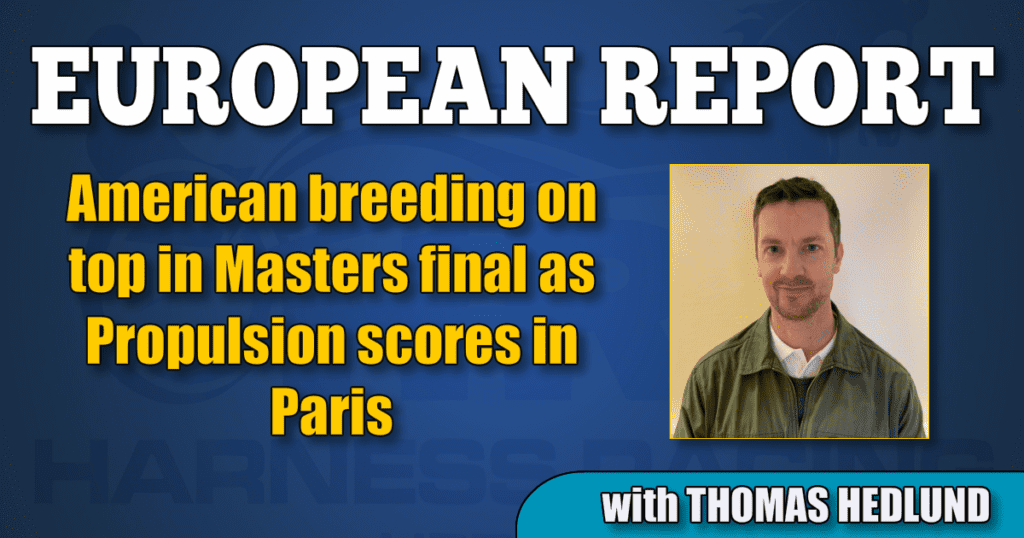 The final of $430,000 Masters du Trot at Vincennes became a thrilling story where the victory seemed to go to France and the first choice Cleangame, paired with trainer Jean-Michel Bazire.

But harness racing is about keeping the gait until the wire and Cleangame, who eventually found position first over, outside leader Mindyourvalue W.F, couldn’t defend himself in the right gait at the mid-stretch. An expensive break for the Bazire-trained trotter destroyed the French plans of celebration.

The conditions in Masters where the same as in Prix d’Amérique. 2.700 meters (approximately 1.7 miles), but in this particular race, only 11 horses gathered around the big black track of Vincennes in Paris.

Daniel Redén’s Propulsion (Muscle Hill—Danae) and Örjan Kihlström found third over as the pace wasn’t too high throughout the race, so Kihlström had to send Propulsion three wide with a half mile to go and the duo didn’t get the luck Kihlström suspected, at least not at that point, when Bold Eagle left his position third on the inside for second over.

That move resulted in Propulsion having to travel three wide for the rest of the race and in the home stretch it seemed like Cleangame, who disarmed leader Mindyourvalue W.F. in the end of the last turn, would never be captured.
But the break from Cleangame opened up the possibility for Propulsion and for the second year in a row, the 8-year-old Muscle Hill son was crowned the winner of the Masters in Europe.

”Cleangame is a tough horse to beat but we had the luck on our side today. Propulsion always performs on a high level, so even today and I’m very glad that we could win this race again. I don’t know how the future will be for this horse. He has a tremendous career to look back on so far and he’s been fighting in the top for four seasons. It’s not impossible that we try in Prix d’Amérique once again in January next year,” said Redén.

The mile rate over 1.7 miles was 1:55.4.
Junior Guelpa’s Bahia Quesnot finished strongly for second place and Bold Eagle had a solid performance and finished third.