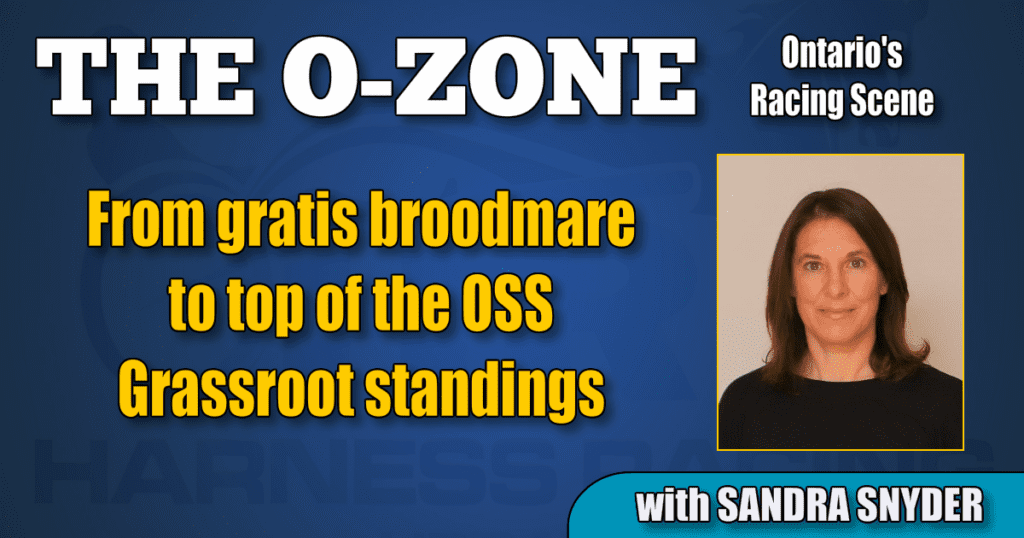 From gratis broodmare to top of the OSS Grassroots standings

Connie Chisholm thanks her mentors in the standardbred business for helping her top the Ontario Sires Stakes Grassroots standings with homebred sophomore trotting filly Halo Its Me.

Ten years ago, Connie Chisholm was given the opportunity to choose a broodmare from those she was boarding for Kingston, ON resident Len Kordy. Chisholm chose 13-year-old Super Pleasure–Polished Stone mare Joy Of Pleasure and the decision has proven to be a sound one.

Joy Of Pleasure produced three foals for Chisholm and her husband David, Angus Hall mare Agusta Wind, Ken Warkentin gelding Warken On Air and Archangel filly Halo Its Me. All three raced and Halo Its Me currently sits atop the 3-year-old trotting filly point standings with two wins and one second in Ontario Sires Stakes (OSS) Grassroots action.

“He asked me what one I wanted and the one that I picked, he kind of looked at me like why would you pick that one?” Chisholm said. “And I said, ‘Well I like her temperament.’ We’d had maybe three or four babies at the farm from her, she was beautiful to work around, and she had some speed, and I liked her breeding and all her babies were 100 per cent — they all raced. So I said, ‘That’s a good one to start with, she’s old, but I’ll take her and maybe I’ll be guaranteed I’ll get myself a racehorse.’”

The newly-minter breeder was right. Nine-year-old Agusta Wind earned $28,137 in her four-year career before retiring to be a broodmare in 2015. Eight-year-old Warken On Air has banked $41,064 since making his debut in late 2014 and Halo Its Me boasts a record of four wins, three seconds, one third and earnings of $43,445 in her 11 sophomore starts.

Chisholm had been caring for Joy Of Pleasure at her Belleville, ON farm, one of a number of standardbreds that eventually replaced the morgan horses that were the original residents. A long-time member of the morgan horse community as an owner, trainer, breeder and judge, the veteran horsewoman was charmed by the easy-going nature of the first few standardbreds that arrived in her barn.

“We had a stallion that we used to collect and ship. Some of the standardbred fellows said, ‘Oh I have a stallion, can you collect and ship for me?’ And then they liked how I kept my horses and eventually my morgan business kind of went by the wayside and the standardbred guys kept bringing me more and more horses to look after, layovers and broodmares, and they just kind of took me over,” she said with a laugh. “I was used to morgans, saddlebreds, hackneys, all the hot little horses, and these guys were so easy and natural to break and train to a cart, a sulky, and I was just mesmerised by them because they were just such a nice breed to work with.”

Soon after Joy Of Pleasure became their foundation broodmare, the Chisholms sold their Belleville farm and moved to Brighton, ON, and breeding and racing standardbreds became their retirement project. As the size of their own herd has grown, they have reduced the number of horses they board on behalf of clients and two horses currently in residence for owner David Reid are the last outside horses the couple will care for.

“We are going to retire from other people’s horses and just do our own thing. It’s got to be too much for just my husband and I with the racing and breeding,” said Chisholm. “I’m not going to do any more foaling contracts or anything anymore. Dave’s are the last two and it’s just going to be us.”

Mark Steacy trains Reid’s horses when they leave the Chisholms and Connie says the three-time Johnston Cup winner has been a valued source of information and guidance during her transformation from morgan horse to standardbred trainer.

“Mark’s helped me out and gave me lots of pointers, because it’s like teaching an old dog new tricks, eh. And John Bax, he was another one of my mentors that helped me. I used to raise Len’s (Kordy) horses and send them off to John Bax, and so when I get in trouble and I can’t figure out things I’ll phone one of those two and say ‘Help.’” said Chisholm. “And the Hies, Doug Hie has been a really good mentor for me also. The Hie family have been in horses for a long time and when I need some pointers, I get stuck with something, shoeing, I always call him, too.”

Between her experience as a morgan horse trainer and judge and the support of her mentors, Chisholm decided to obtain her trainer’s licence and sent her first horse in behind the starting gate in 2013. With Halo Its Me’s success in the Ontario Sires Stakes — the filly gave the couple their first win in the provincial program on July 16 — Chisholm is having a career best year this season.

“Right now Halo, the sun kind of shines right from you know where,” said the horse woman. “She’s the greatest, she loves people and Halo, I really believe she’s so smart she can talk, she gestures her talk. She’s a beginner’s dream because she just does it. I really can’t take a whole lot of credit for Halo because Halo’s just one of those horses that, she just likes to do it. She’s a joy to work with and she just loves her job, plain and simple. Loves her job.

“I look at the list of competitors when I go in the race and I go, ‘Oh my god, like these are all my mentors.’ And we’re getting top spot and I’m just like pinch me, you know. They phone me at home and congratulate me and I’m like, ‘I don’t know what’s happening, but it’s great.’”

In addition to Halo Its Me and Warken On Air, Chisholm is also racing 5-year-old mare Muscle Lane. The only horse the couple has purchased from a yearling sale to date, the Muscle Mass–Lane Of Dream mare has earned $60,876 in her racing career and is currently attracting a great deal of attention from Ontario breeders.

“I’ve had five inquiries on the Muscle Mass mare, people wanting her for a broodmare and I’ve turned it down several times, because I bought her for a broodmare in the beginning because I liked her breeding,” said Chisholm. “Her great-grandma was that Crown Starlet mare, and she made I don’t know $600-700,000.

“I was going up to buy her just off her pedigree alone. And John Bax looked at her and said, ‘Yeah I looked at the pedigree too and if nothing else, that’s broodmare material.’ And obviously I’ve had five calls this year looking for her for that reason, so I guess I was pretty wise to grab her.”

“And I think they were really sweet to me because when my mentors saw me bidding they were going, ‘Oh we’ll leave her alone.’ I think they kind of protected me, so I was grateful for that because she’s been a really fun, fun horse.”

In addition to the three racehorses and broodmare Agusta Wind, who has a Muscle Mass yearling and an Archangel weanling, the Chisholm herd also includes broodmare Cassadaga (Tagliabue–Psychic Friend) and her Royalty For Life weanling. The couple enjoy watching the mares and foals roam the hills of their Brighton farm and knowing Halo Its Me’s Grassroots success was built on those hills gives them a level of satisfaction unmatched by the average retirement project.

“I get bored kind of with the showing thing and going all over and not getting any compensation other than a ribbon,” Chisholm said, laughing. “I was a little bit older than most to start into the racing thing, but I thought, ‘Oh, what the heck, we’ll just do it in retirement.’ My husband was close to retirement and he said, ‘Well, I’ll help you,’ and here we are.”