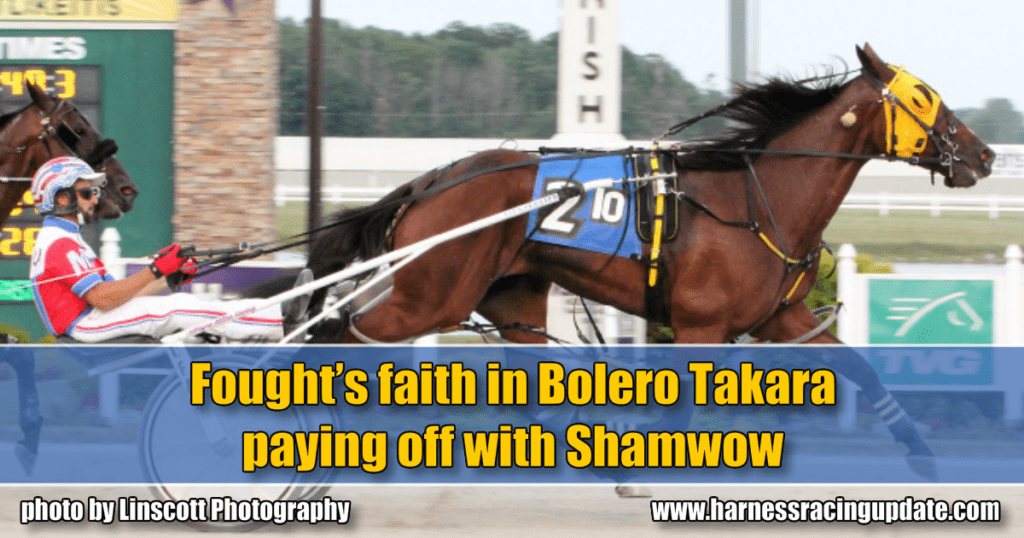 Fought’s faith in Bolero Takara paying off with Shamwow

The Indiana-sired half-brother to Shamballa is making waves at Harrah’s Hoosier Park after a 1:49.4 score last week for Jeff Fought.

Three years ago this weekend the talented pacer Shamballa scored an impressive victory on Hambletonian Day, springing a 1:47.1 upset in the $225,550 U.S. Pacing Championships. Shamwow, his Indiana-sired half-brother, made waves last week at Harrah’s Hoosier Park with a 1:49.4 score in sires stakes action. The Always A Virgin gelding broke the 1:50 barrier for Jeff Fought’s Cornerstone Stock Farm in only his fourth career start. The pacer never saw the starting gate as a freshman, and Fought said that was by design.

“I think that a lot of people would have raced him at two, but I always like to look at the family. If you look at the family, they hardly have a 2-year-old record in there,” Fought said. “They are just not good 2-year-olds. Having had some of them, I think I can see why. This Shamwow colt is a textbook case of probably why the rest didn’t race. Mentally, he was absolutely not mature at two. They probably all had plenty of speed, but if handled the wrong way, you would ruin them pretty quickly.”

When Fought acquired the dam, Bolero Takara, Shamballa was not yet of racing age. That caught the breeder’s eye was his familiarity with the mare on the racetrack. Fought and his father, Dave, first entered the business with a pacing filly named Waiting And Watching. Her success stoked their interest in racing, but they often found themselves competing against Bolero Takara.

“She raced against Bolero Takara, and I remember watching Bolero Takara because she was unbeatable,” said Fought. “So, I remembered the mare and I had always followed her.”

Bolero Takara appeared on the auction site onGait.com in late 2011, and immediately Fought was interested. The mare was a 100 per cent producer, but she was open at the time. With her age and status, Fought had some concerns, but after speaking with owner Paul Deslauriers, he pulled the trigger.

“He had been really cautious in how he bred her,” he said. “He would skip years here and there, like if she foaled a little bit later, he wouldn’t even try to breed her back. He managed her well.”

Fought purchased Bolero Takara with an eye on commercial breeding. With her previous production – four six-figure earners with multiple in under 1:50 before Shamballa’s debut – he felt she would be a good addition to his broodmare band. Things did not go according to plan.

“At that time, Panspacificflight was really hot in Indiana. I bred her to Panspacificflight and had just a gorgeous stud colt, probably one of the most attractive colts that I had ever foaled and raised,” said Fought. “Of course, early in his yearling year he started acting really funny. We took him to Rood & Riddle, he had EPM horribly, and we had to end up euthanizing him.”

Breeding next to Always A Virgin, Bolero Takara foaled a filly named Takara Rose. With Shamballa beginning to show his talent at the races, Fought opted to keep the pacer and campaign her before bringing her back to Shipshewana, IN as a broodmare. She won three races and took a sophomore mark of 1:53.2.

“That was a filly that as a baby just had an incredible amount of personality and I really liked her,” he said.

Since Takara Rose’s arrival, the dam produced two more foals for Cornerstone Stock Farm. Fought had plans to sell Bolero Takara’s offspring at auction, but that will never happen. Shamwow is racing and showing tremendous potential, and a Rockin Image half-sister, Big Peeps, is the last of the line. Fought tried to breed the dam to Somebeachsomewhere again, in hopes of getting a full sibling to Shamballa, but Bolero Takara lost the foal and the stallion died before she could be bred again.

“She’s a 1996 model and the last foal that she had, she had a really funny pregnancy. Everything ended up being okay, but the last month before she foaled she literally ran milk down her leg. She just dripped milk like I’ve never had one drip milk,” noted Fought. “It made me really nervous. She had a fine foal and everything was normal, but that gave me the sign that maybe we should hang it up.”

Although Fought’s plan has not turned out as he had hoped, Shamwow’s emergence this season as an unraced sophomore gives him hope. The performances the gelding has turned in while still maturing should serve notice to the competition. Knowing how many of the pacer’s siblings were not tremendous at two, Fought was in no hurry to rush Shamwow in 2018.

“The feedback I got from Jay Garrels originally when he broke him, he absolutely loved him,” he said. “I had shared with him what I was thinking about breaking this one and turning him out. He could not agree with me more on that decision, so that sealed the deal.”

Garrels trained Shamwow early before transferring to Melissa Essig over the winter. The sophomore went to work in Florida before returning to Indiana and registering his first qualifier May 1 at Hoosier Park. Driven by Mike Oosting, Shamwow raced mid-pack and finished fourth in 1:55. One week later, he paced second in a qualifier in a time of 1:54. Making his pari-mutuel debut in the Tony Stark at Hoosier Park, Oosting steered the gelding to a 1:51.4 triumph, kicking home in :26.3. LeWayne Miller would sit behind Shamwow in his next start, a 1:50.4 score on July 4 and guided him to a runner-up effort two weeks later in a time of 1:51.2. Essig skipped the first rounds of Indiana Sires Stakes competition, but dropped him in the box for the fourth leg on July 26.

“We skipped a few early sires stakes legs. We could have went right into it and probably would have been just fine. I think when you start a 3-year-old that hasn’t raced before, you essentially need to handle them like a 2-year-old,” said Fought. “That’s what we’ve tried to do with him is try not to race him in back-to-back weeks, space him out and try to teach him while we’re racing in those races. That is why you’ve seen him come off the pace so much; we’re still trying to teach him.”

The plan has worked well. In the fourth leg, Shamwow showed he had what it takes to compete with the best in the Indiana program. Starting from post two in the full field, Miller raced the pacer mid-pack again before sprinting home in 27 seconds to win by a margin of one and one-half lengths. The 1:49.4 clocking marked the fastest mile of his short career. In his first real test, Shamwow answered the bell, turning in a strong performance despite scoping sick afterward. Besides Indiana sires stakes, the 3-year-old is eligible to Grand Circuit races late in the year at Hoosier Park.

“I’m not sure he’s much more mentally mature than most 2-year-olds are. I think he’s just going to keep getting better that way. He’s really becoming a horse that’s good to work with, it just takes time,” Fought said. “I think in a big stable he’d be in trouble. With the attention they give him and being a smaller stable, I think it’s the perfect spot.”

Shamwow has big hoof prints to fill when compared to his more accomplished brother. However, the sophomore is showing he possesses all the tools to make some noise this fall and later as an older horse. Fought hopes his pacer can follow that blueprint. The design has worked so far.