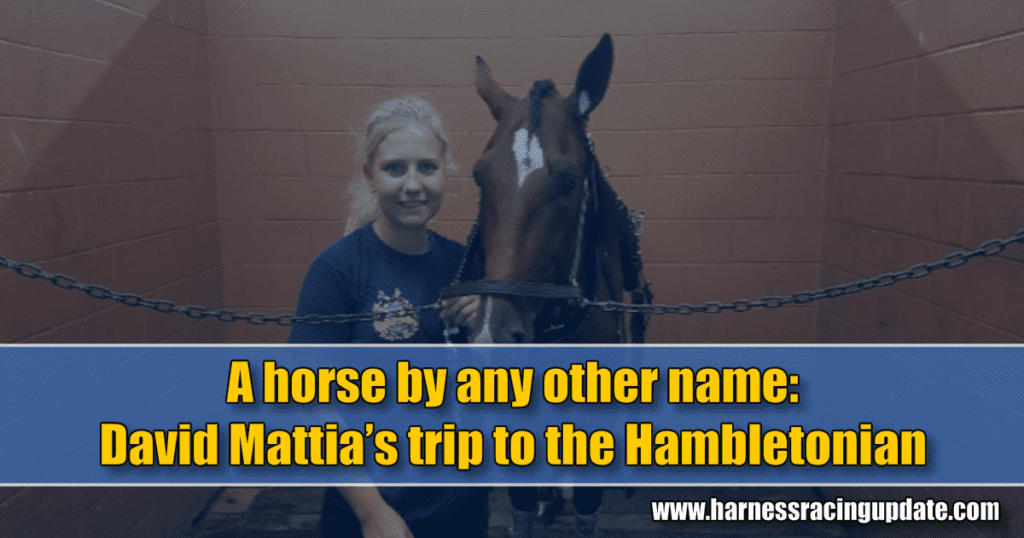 A horse by any other name

PART 1 – Driving to the Hambletonian with nothing to write about

With only my friend Ross for company, I set out on my 45-minute drive to the Meadowlands for this year’s Hambletonian. Ten minutes into my ride, it dawned on me that I had nothing to write about. I’m supposed to be both a writer and a harness racehorse trainer, and here I am, on my way to the greatest race in all of harness racing, and I got nuthin’.

But why? I mean, I pretty much know everything about each horse in the race, and I’m either professionally or personally acquainted with most of the people connected to these horses. In other words, I am, by nature of my bi-professional involvement in this event, doubly qualified for this job. What’s the deal with this emptiness?

Sit back for a minute and think about it from my nutty perspective.

So, I’m heading up the New Jersey Turnpike while Ross, who knows nothing about harness racing, is trying to read the program.

Ten minutes into the ride, Ross muses quietly, “Hmmm…. Greenshoe. I used to have a pair of green shoes when I was in kindergarten. Maybe that’s a hunch.”

Then, suddenly, Ross laughs loudly and says, “There’s a horse in the race named Gimpanzee.”

“He’s a great horse,” I replied. “I think it’s pronounced with a ‘J’ sound… and why did you wear green shoes in kindergarten?”

Ross replied, “Who knows? I was like five-years-old, but whatever, don’t you think it’s a bad idea to use the word “gimp” when you name your horse?”

I told him that I’d had a lot of beautifully named horses who should have had the word “gimp” in their names instead, but that the Gimp he’s laughing about is an exceptional exception. He’s never lost a race and he’s earned over three quarters of a million dollars. I also lectured about how racehorses have their professional names – the ones you see on the program – but they usually have a pet name that’s used in their day to day interactions with the humans who care for them.

Then I wondered what name Gimpanzee goes by from day to day in order to steer clear of the whole gimp thing. I’ve heard announcers pronounce his name with both a hard and a soft G, so a soft G would suggest that he’s known as Jim or Jimp around the barn. A hard G would suggest otherwise.

I had no idea. What if his pet name actually turns out to be Gimp or Gimpy? And what about all the others? Is Greenshoe called Greeny or did that moniker go to Green Manalishi? Who’s who? Hey, I know what I’ll do. I’ll ask their grooms. They’re the ones who talk to these champions all day.

Whew! I had my story. I’ll talk to the grooms about the horses and about themselves. But then there’s that nagging aspect of my personality where I am dreadfully afraid of bothering people. You see, harness racing’s best kept secret is, that of all the people attached to great and not-so-great racehorses, the groom is usually the one with the least amount of spare time. I’m shy and they’re busy. This is going to be a mess.

Oh, and strictly between you and me, I am writing this before the races are run. The picks in my head are DON’T LET ‘EM and PILOT DISCRETION. It’s a moot point because I don’t bet, and I like to pick Davids over Goliaths. After I speak to some grooms and the Hambletonian is finished, I will tell you how it all turned out for Gimpy and Greeny and… well, you get the idea.

PART 2 – Arriving at the Hambletonian and bothering the grooms

I made it to the paddock just in time to pester some grooms about the whole pet name thing and whatever other questions I could squeeze in. Thankfully, Ross disappears into the grandstand because the smell of horse poop makes him sick. “What smell? What poop?” I said. Nobody believes that horsemen are nose-blind to manure…but I digress.

So, I walk into the paddock, and wouldn’t you know, the first horse I stumble upon is Gimpanzee and his caretaker, Nathalie Norlander. She couldn’t have been nicer.

“He has a lot of energy,” she says. “He’s like a teenager. If he sees something, he that he wants, he tries to get it. But, he’s really nice and friendly to work around. He’s a very nice horse to work with.”

So, are you ready for Gimpanzee’s “real” name – his pet name? “I just call him MONKEY,” said Nathalie. “It’s just the name I made up for him. It doesn’t really mean anything. It’s easy to just call him Monkey.”

I thought that was a magnificent job of political maneuvering around the “gimp” stigma. Nathalie went straight for the monkey angle. Brilliant.

The next horse I came upon was the Nancy Johansson trainee, DON’T LET ‘EM. He’s the only horse in the Hambletonian eliminations whose groom is bigger than he is – and he’s not a small horse by any means. The big dude in charge of the handsome colt is a guy named Rufino Telon. Looking more like a professional wrestler than a groom, Rufino seems to be very nonplussed by all the Hambletonian hoopla. I think that might have something to do with his height.

“There’s nothing special about him,” said Rufino about the horse in his care. “He’s very normal like any average horse. Around the barn I just call him Whiteface. No reason for that, but it’s what I call him… just Whiteface.” I thanked Rufino, and then I slinked away before he could give me a Missile Drop Kick or an Elbow Drop.

Then, I decided to bother the big horse in the race. His name is GREENSHOE, and his groom is Mikaela Melander. So far, I’ve been sailing along well with my brief and seemingly silly interviews. Still, I don’t seem to be bothering anyone, but I’m a little intimidated by Greenshoe because he’s Greenshoe. He hasn’t won the Hambletonian yet, but…uh…he’s Greenshoe.

“I call him Greenie or Greens,” said Mikaela. “It’s just a name I made up for him. He’s very energetic about his job but he’s easy too. Today though, when he saw the Budweiser horses, he got very excited.”

So, there’s the answer to the Greenshoe pet name question. His name is basically about the whole green thing and he likes beer – or horses who drink beer.

Soon after, because I picked my spots, I approached the horse that I think will win the whole thing. I told his trainer Tony Alagna that his horse was my pick to win it all and then I apologized for jinxing him. Remember, at this point in time, I don’t know where he will finish, but then I apologized to Tony in advance for having the audacity to put a whammy on his horse.

Pilot Discretion’s groom is a woman named Irene Peterson. I kind of think I know her, but I can’t be sure. She didn’t seem to recognize me, so maybe I don’t. Anyway, Irene gave me a very colorful response.

“I call him “Pilot” around the barn,” she said. “Sometimes I call him other names when he acts up and I get mad at him, but he’s a nice horse. I won’t tell you what those other names are, but he’s rarely made me angry or done anything wrong to use them too many times.”

Finally, last on my list, but not least, is another Melander contender named Green Manalishi who is also groomed by Nathalie Melander, but today, with two horses in her care in-to-go, Nathalie has handed over the race day caretaking job to Malin Skarsholt.

Malin told me that Green Manalishi is called “Green” around the barn and that he’s the easiest horse to take care of. “He acts like a 10-year-old gelding. He’s just so nice. I’m only taking care of him for today.” Talk about an understatement.

PART 3 – Sweating out the first elimination

Okay, so here I am, waiting for the second elimination to leave the gate and I’m alive with my groom/horse interviews from the first elimination. Gimpanzee (finished 4th) and Green Manalishi (finished 1st). They’ll be in the final. Will my lucky streak continue?

PART 4 – Sweating out the second elimination

Does it get any better than this? All three of my groom/horse interviews for the second elimination qualified for the Hambletonian final. Greenshoe (winner). Don’t Let ‘Em (second). Pilot Discretion (fifth).

Nothing to report so far. Just sweating it out in the press box.

Just watched When Dovescry go into beast mode through the stretch to win the Hambletonian Oaks. Trained by Rene Allard and driven by Simon Allard, the 3- year-old
daughter of Muscle Hill rocketed through the lane to win easily in 1:50.2. She looked superb.

The colts for the Hambletonian are now on the track. Pilot Discretion, my secret pick who drew post #1 is first out. Greenshoe, another one of my interviewees and a huge favorite, is #2. Don’t Let ‘Em, is #3. Green Manalishi who drew post #4 looks nice as he steps onto the track. My last interviewee, Gimpanzee, who suffered his first career loss in his elimination, is on the track wearing saddle pad #7.

What does this mean so far? It means that every horse I’ve put under my microscope of minutia, has qualified for the race. There are ZERO minutes to post, but zero minutes takes a long time when it comes to horse races. Greenshoe…. I mean Greenie…is the 2-5 overwhelming choice.

Nothing. Well, nothing that has anything to do with what I wrote, but a whole lot of something for a horse named FORBIDDEN TRADE. He won for driver Bob McClure and trainer Luc Blais. My pick, Pilot Discretion, (aka PILOT) made a valiant bid with a bold brush to the top past the half but got swarmed in the stretch. Greenshoe (aka Greenie) looked like he was going to come up on the outside to win, but he didn’t. He finished second. Gimpanzee (aka MONKEY) finished third.

Now, I’m going home, but I have to find Ross.