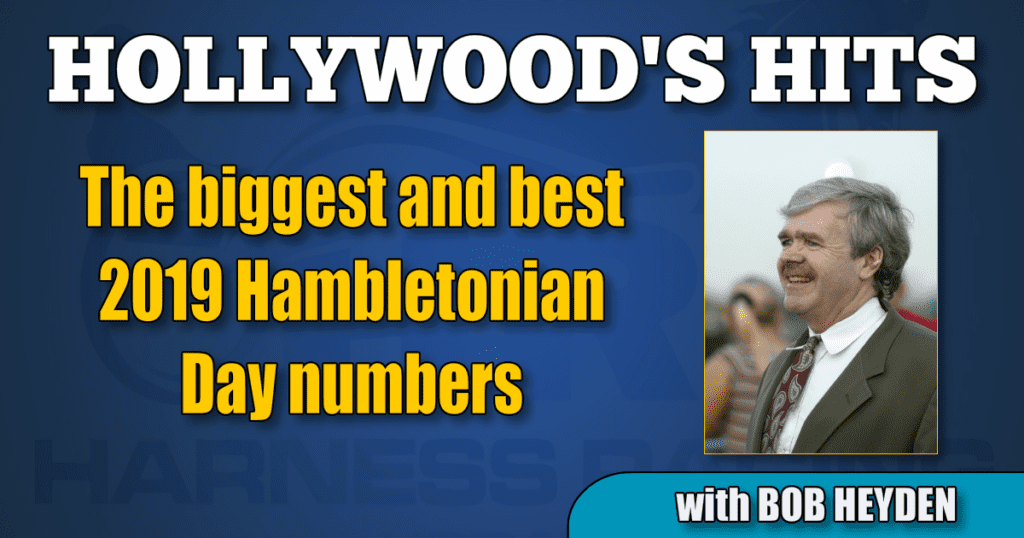 • Nine out of the 24 track records listed in the Meadowlands program heading into Friday’s card were set on a Hambletonian Day.
• Marcus Melander has four in the Hambletonian and five in the Peter Haughton final. Remember that the last million-dollar race (in U.S. funds) was won by Melander and Brian Sears-at better than 30-1 in the 2018 Yonkers International with Cruzado Del Noches. The combined record lifetime of the four-pack sent out by Melander in the Hambletonian is: 48 27-10-2.
• It will be the 94th Hambletonian and 39th at the Meadowlands.
• Pinkman, now 7, is 6-for-49 since his Hambletonian victory of 2015.
• Progeny of Muscle Hill make up six of the 16 in the Hambletonian elims and he is looking to sire his 4th straight Hambletonian Oaks winner.
• Three of the elimination horses for the Hambletonian have never been off the board: Pilot Discretion 8-8; Gimpanzee 12-12; Green Manalishi 14-14
• Tim Tetrick will look to extend his streak of being the only driver to win a Hambletonian elim at the Meadowlands three straight years.
• The last six Hambletonian Oaks have been the fastest ever, with the stakes mark of 1:50 coming in 2018 by Manchego.
• Twenty-one horses on the card are trained by a woman — Nancy Johansson leads the way with seven.
• The most money ever banked in a single trotting race was the $930,000 by the Ray Schnittker barn in 2008 when Deweycheatumnhowe won it and Make It Happen was third in the $1,500,000 race.

Other notes on Swedish trainers on this list include:

Trixton was part of a powerhouse Takter trio of 2014, which included the favorite Father Patrick and the runnerup Nuncio. Oddly, even though John Campbell’s first Hambletonian win was in 1987 with Mack Lobell the same year Takter sent out his first starter (Sir Taurus, sixth in elim no final), this was the first time they had teamed together in the Hambletonian.

Pinkman was driven by Sears for the first time in 2015 besting the post time favorite with Yannick Gingras Mission Brief and Ron Burke.

Ake Svanstedt’s Perfect Spirit in 2017 became the second horse in three years to win the Hambletonian final after having post 10 in the elim (Pinkman).

If Nancy Johansson trainee Don’t Let Em wins the Hambletonian, it’ll be a clean sweep of the North America Cup, Meadowlands Pace and the Hambletonian by female trainers.

Nancy Johansson won the NA Cup with at 4-1.

Linda Toscano won the Meadowlands Pace with Best In Show at 27-1.

Johansson was the caretaker for the 2004 Hambletonian favorite Tom Ridge, who dominated in his elim but faded badly (choked down, according to Ron Pierce) and missed the money that year. She made up for that big time with Muscle Massive and Pierce again in the 2010 Hambletonian, this time at 6-1.

Per Eriksson is doing color for Swedish TV for this year’s Hambletonian.

He is one of three trainers to win at least three Hambletonians at the Meadowlands and finish 1-2 in at least one of them. (Jimmy Takter and Chuck Sylvester are the other two).

Eriksson drove in the 1983 Hambletonian at age 22.

He trained American Winner at 2 and a dispute cost him a shot for three straight Hambletonians.

All three of Per Eriksson’s Hambletonians came before Jimmy Takter ever hit the board in this race — despite the fact they were born 17 days apart in 1960 in Sweden.