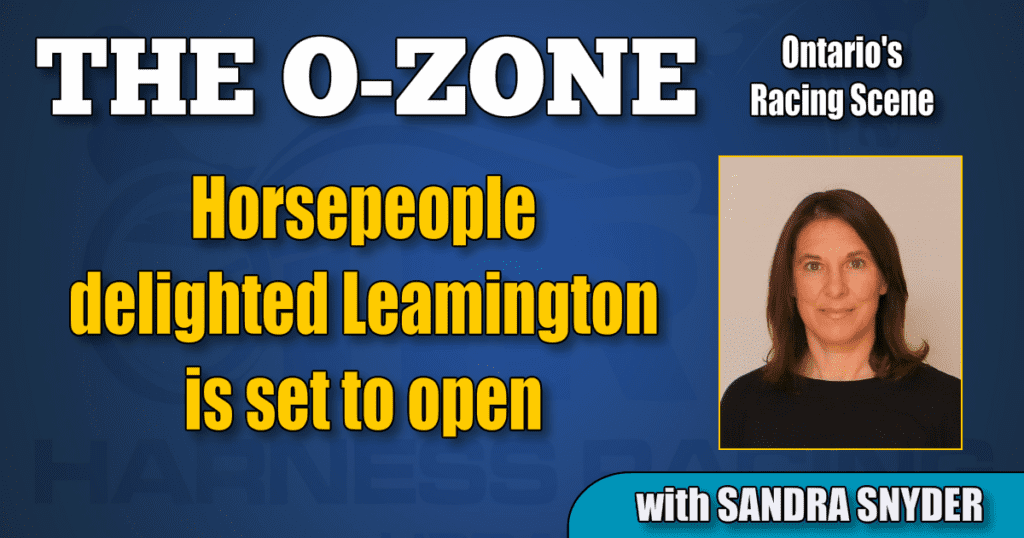 Heading into the Civic Holiday weekend, the midpoint of Ontario’s summer harness racing season, there are a variety of special events on the calendar for fans and horsepeople.

On Saturday (Aug.3), Hanover Raceway hosts its marquee event, with the $64,100 Dream Of Glory final for Ontario-sired 3-year-old trotters slated for Race 9 on the card. Post time is 6:15 p.m. to accommodate fireworks after the last race.

Complete entries for the card are available here.

Grand River Raceway presents its annual celebration of the province’s harness racing community on Monday (Aug. 5). Industry Day features the $157,500 Battle Of The Belles Final for Ontario-sired 2-year-old pacing fillies and the $239,000 Battle Of Waterloo Final for Ontario-sired 2-year-year-old pacing colts. Also on tap for the afternoon, which gets underway at 12:30 pm, are five Ontario Sires Stakes (OSS) Grassroots divisions for the 3-year-old pacing colts and geldings. The Grassroots competitors kick things off in the first race, with the finals capping off the afternoon’s festivities in Races 10 and 11.

Complete details about Industry Day, including a program, are available here.

Monday also marks the end of the Dresden Raceway meet and the half-mile oval will thank fans and horse people with a free corn roast. The first race goes behind the starting gate at 1:30 p.m.

Dresden’s finale means that local horsepeople shift their focus to Leamington Raceway for the next 13 weeks. Leamington kicks off its season on Aug. 4 and will play host to a Sunday afternoon card each week until Oct. 27, with a first race post time of 1:30 p.m.

Regulars at both Dresden and Leamington, Cathy Gaudreau and Jim Napper, always look forward to the start of the season at Ontario’s southernmost oval. The pair has been racing in the Windsor-Essex, Chatham-Kent area for decades and enjoys the family atmosphere found at the Leamington half-mile.

“The thing that we like most about Leamington is, it’s like a family affair. All the people that race at Leamington, we’ve pretty well known them our whole life. It’s funny, you lose a race, you don’t mind losing to your friend,” said Cathy Gaudreau with a laugh. “We were racing in Dresden on Sunday (July 28) and we were in with Gord McDonnell, who we’ve known since back in the Windsor days and we said, ‘Well it’s your turn to win this week Gordie. We won last week, your turn this week.’ It’s competitive, but it’s friendly. After the races the people say, ‘Good job, nice race, see you next week,’ kind of deal.”

In spite of Gaudreau and Napper’s best wishes, McDonnell did not get the win as Blissfullannmarie chalked up her second straight for the couple and partner Steve Girard of Thamesville, ON. The win was the Blissfull Hall–Tommy White Sox mare’s 32nd lifetime and pushed her earnings to $105,617.

“She’s kind of our pet of the stable. She’s a sweet, sweet little mare. She’s very small, and she tries hard,” said Gaudreau. “We’ve had her since she was a yearling, we broke her and trained her and we just love her. She’s like a pony though, she’s maybe 14 hands. She’s just borderline horse.”

The 8-year-old mare has carried the load for her six equine peers so far this summer, although Gaudreau is hoping that she will get some help through the Leamington meet.

“I’m starting a maiden probably on Monday. Her name is Shes A Gunslinger (Dali–Kendal Bullet), and she’s going to try racing in Dresden for the first time, and hopefully she’ll be racing in Leamington for the rest of the summer. And then we’re probably going to qualify a little Sportswriter filly called Eataam Sport (Sportswriter–Warranova) in Leamington on Sunday,” said Gaudreau. “We’ll probably have her ready to go for the next week, so hopefully I’m going to have at least two or three racing for Leamington every week. That’s what my goal is anyway.”

All seven horses are a bit behind schedule due to the heavy spring rains which made the sand jogging track on the couple’s Bothwell, ON area farm unusable for a stretch.

“It was kind of a funny production here. We had a lot of water this year and we couldn’t jog at home. We had six or seven of them jogging, so we’d harness them all up and load the bikes on the truck and the trailer; I have a three horse trailer, so we’d take two horses and two bikes and go over to Bothwell, unload them, go our mile, and load them back up and bring them home and strip them. And we’d do that like two or three times a day. The horses got really good at standing outside to get hooked and they all load well,” said Gaudreau, laughing. “It was good practise for the 2-year-old (Jim Who). And my one mare, that Gunslinger mare, she hadn’t been off the farm since we bought her as a yearling so it was really good for them.”

When Windsor Raceway was in operation Gaudreau and Napper had as many as 10 horses racing regularly, but they have scaled back in recent years as local racing opportunities dwindled and the calendar pages continued to turn over.

“One mare I have that was good last year, she can’t race any more, and we were going to keep her for a broodmare and I thought, oh we’re just getting too old,” said Gaudreau. “Jim’s 69 this year and I’m going to be 65, so I’m thinking, by the time we got the horse racing I’ll be approaching 70. If we want one, we’ll just go buy one.”

Through her 35-year training career Gaudreau has amassed 447 wins and earnings of $1.7 million. Last season she finished fourth in the Leamington Raceway trainer standings with six wins, three seconds and one third in 17 starts, and while she does not expect to match those stats this season, she is still looking forward to the track’s opening day.

“They’ve really tried hard to put on a good program,” she said. “I’m really excited to be part of Leamington, to race there.”

In addition to the nine races (entries here), Leamington has an action-packed afternoon planned. Local radio station Country 95.9 will be on site, there is face painting for the youngest fans and retired standardbred Lenny will be on hand to accept carrots and neck scratches from fans of all ages. There are also a variety of giveaways and prize draws on tap, both Sunday and throughout the 13-week season.

“It’s a busy, busy season. We usually draw decent crowds, and they seem to like everything we do,” said track manager Ellie Mayhew, outlining a roster of 13 events that range from Kids’ Day to an Apple fest. “We’re a small track and maybe we don’t have the best grandstand — we don’t even have a toteboard, we use televisions — but the atmosphere is what people really love, because it’s like a big family atmosphere and everybody is friendly and joking and laughing, talking all day. They just say they make new friends all the time.”

In addition to attending all the local special events, Ontario racing fans will be keeping an eye on Saturday’s Hambletonian card. Eight Ontario-sired horses will compete on the program, led by Hambletonian hopeful Forbidden Trade (Kadabra–Pure Ivory), who gets Post 1 in the second elimination. A total of 30 Ontario residents have horses racing on the rich card of racing, with Marvin Katz and Al Libfeld leading the way with an ownership stake in five horses each. Toronto resident Katz has three horses just in the James Doherty Final for 2-year-old trotting fillies, while Pickering resident Libfeld has two in the same race.