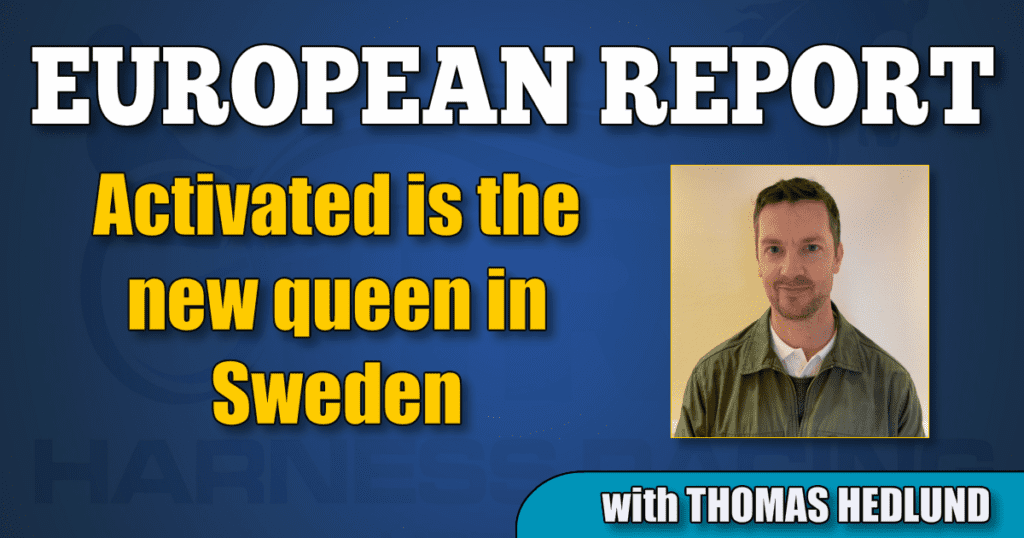 Activated is the new queen of Sweden

In May, 4-year-old Jocose mare Activated upset Conrads Rödluva in the Drottningpokalen at Åby in Sweden. When the $505,000 Stochampionatet was held at Axevalla racetrack in Sweden on Sunday (July 21), history repeated itself.

Conrads Rödluva dominated the biggest races for 3-year-olds last year, while Activated was out of luck when the stakes races was scheduled. Before the $590,000 Oaks, Activated got sick and had to be scratched from the final. But great rewards have come this year instead for Fredrik Wallin’s trotter.

Wallin has great ability to produce nice trotters that compete well in the stakes races and Activated was strong going already as a 2-year-old in Sweden. Different problems stopped her from developing as quickly as her sisters in the crop last year, but now she has proven that the crown belongs to her.

Activated finished second in her elimination the week before the final and Fredrik Wallin had no luck when the draw for the posts was held. His mare got number 12, in the second line behind the gate, but since the Stochampionatet is a race over 1.6 miles, anything can happen and when driver Carl Johan Jepson found position in sixth over and the right horses to trail during the race’s last 5/8 of a mile, Activated sprinted rapidly in the home stretch and caught leader Conrads Rödluva and three-wide finisher Racing Brodda just before the wire.

The weather was a bit uncertain this day at Axevalla and the track was a little bit sloppy when the 12 mares fought for the prize money and mile rate 1:57.4 over 1.6 miles must be considered as great.

“It’s really cool that Activated can pass all the horses in front of despite her post position. I just love this horse, she’s so good. Her way of acting, her mentality… she was so eager to do this today”, said trainer Fredrik Wallin after the big win.

Activated has now seven victories in 21 starts and she pushed her life earnings to a $491,936 mark.

The Elitloppet runner up Makethemark won a qualification for the $317,000 Olympiatravet in April, but did not race the final and the 6-year-old son of Maharajah hadn’t won any more races this season until last Sunday.

Makethemark finished second to Dijon in the Elitloppet at Solvalla in May and followed up with two more runner up performances in Norrbottens Stora Pris (Propulsion won) and Ulf Thoresen International (Vitruvio won). In the Mikkeli, he finally caught a heavy trophy.

Next Direction and Pastore Bob left quickly and the first took over the lead after 350 meters into the race. Makethemark was placed in second over and driver Ulf Ohlsson made his move three wide with 700 meters to go. The 6-year-old trotter had to do the heavy job outside throughout the last turn but was still the strongest horse when the wire approached.

Salmela’s trotter came home in 1:53 and the Swedish-based trainer was cheering with the crowd of almost 12,000 people in Mikkeli after the victory.

“It’s always fantastic atmosphere here in Mikkeli and I try to come back every year. My career started here with Plant The Seed and now I can say that I have an even better horse. Makethemark is the horse of my life,” said Petri Salmela.
Next Direction finished second and Pastore Bob was third.