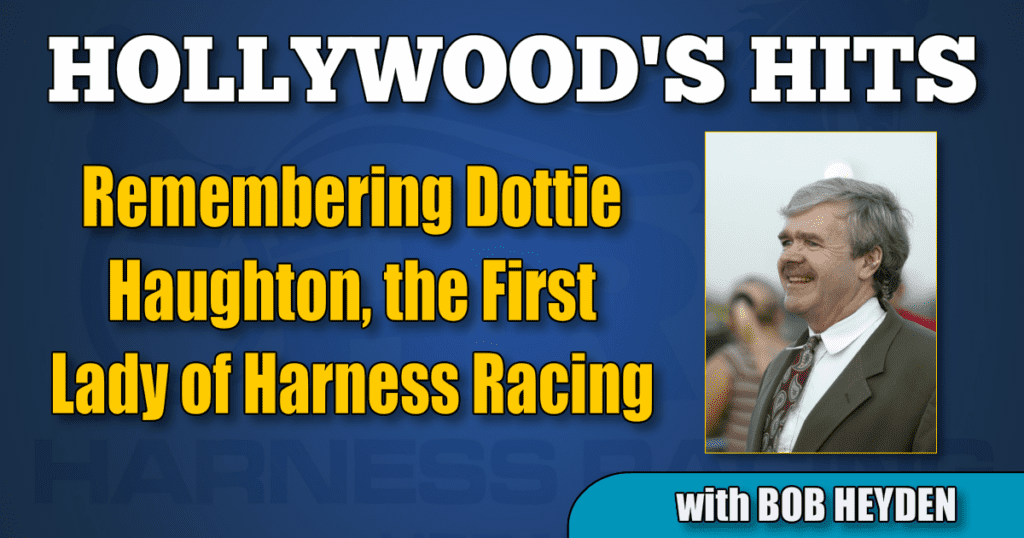 She sat on Nat King Cole’s bench, on Greyhound’s back and the Hall of Fame’s board.

Dottie Haughton was a unifier, a mother, grandmother, an encourager, a nurturer, and in many ways the navigator of Billy’s ascending career. Her stoic presence and ever-present strength was very much needed as the entire Haughton family dealt with the many landmines in life.

Dottie’s was a magnified, yet distinguished, presence; one we simply never could quite get enough of.

She was there for her children, Billy Jr., Holley, Cammie, Peter and Tommy.

When Peter won his first ever race on the Pennsylvania Sires Stakes circuit at age 16, Dottie was his caretaker for a horse called Dr Dewars. He threw a shoe at the 3/8ths, but still won in 2:12. She was there when Peter became the youngest — and still is — to win a Triple Crown race with Quick Pay in the 1976 Kentucky Futurity at age 22. She was present for Tommy when he was the youngest to win the Hambletonian at age 25 in 1982 with Speed Bowl. That record remains, too.

But she was patient too. It wasn’t until after Billy’s 50th birthday party that he won his first Hambletonian — and then won a total of five in nine years (1974-1982). And, it was 57 years from Billy taking the first ever Messenger in 1956 with the standout filly Belle Acton to 2013 when Tommy’s Ronny Bugatti also captured this leg of the pacing Triple Crown.

In the 1986 Hambletonian program insert, three weeks after Billy’s death, Stan Bergstein wrote, “Billy was a spokesperson for the industry, an inspiration, a tireless worker, an advisor and a counselor.” That is a lot of hats for one person to wear, but guess what? They all fit Dottie, too. Very well. Dottie’s the main reason Billy’s star shines as brightly as it does, even today. For in those 33 years since Billy’s death in 1986, Dottie and family never let the lights dim. There’s a majesticity to the name “Haughton” that exists even today.

From Quick Chief (First Triple Crown win for Billy Haughton in the 1955 Jug; when a horse named Dotties Pick was second), to Rum Customer (1968 Triple Crown, the second pacer to reach $1 million behind only Cardigan Bay for his good friend Stanley Dancer) to Keystone Pioneer (her personal favorite) to Burgomeister (the 1980 Hambletonian winner just seven months after Peter’s passing) to Nihilator (Billy’s final star and maybe the brightest of them all), Dottie’s presence encapsulated the near entirety of Billy Haughton’s reign in the sport of harness racing.

It was once said of famed actor David Niven, “He had the gift of friendship.” Surely somewhere along the way he must have crossed paths with Dottie.

Dottie wore her fame well. The constant “Green And White” spotlight never blinded her. Really, and quite admirably, she was one of us.

By simply entering a room, Dottie had a way of bridging the past with today, one which made you want to pull up the nearest chair and find out much more about both yesterday and today, from her unique point of view.

Hers was a welcoming way; a presence that seemed to make any event she attended better. No matter the occasion, you wanted Dottie there, even if you hadn’t yet met her. She brought instant credibility and her remembrances and knowledge were freely shared.

I am, and always will be, a Dottie Fan. Tommy Haughton told me “everybody was.”

For someone who was often referred to as the First Lady Of Harness Racing, she was an international treasure as well. Always a lady, it’s incredible to think of how easily she blended in as one of us. Amazing really, when you think for the better part of seven decades, her name was as much a part of the sport as any Triple Crown winner or world record setter.

For the first time since the Hall Of Fame opened its doors in 1951, the sport is without either Dottie or Billy.

Yes, the track and the stands seem a bit emptier, but don’t the history books, and our hearts, seem a whole lot fuller.