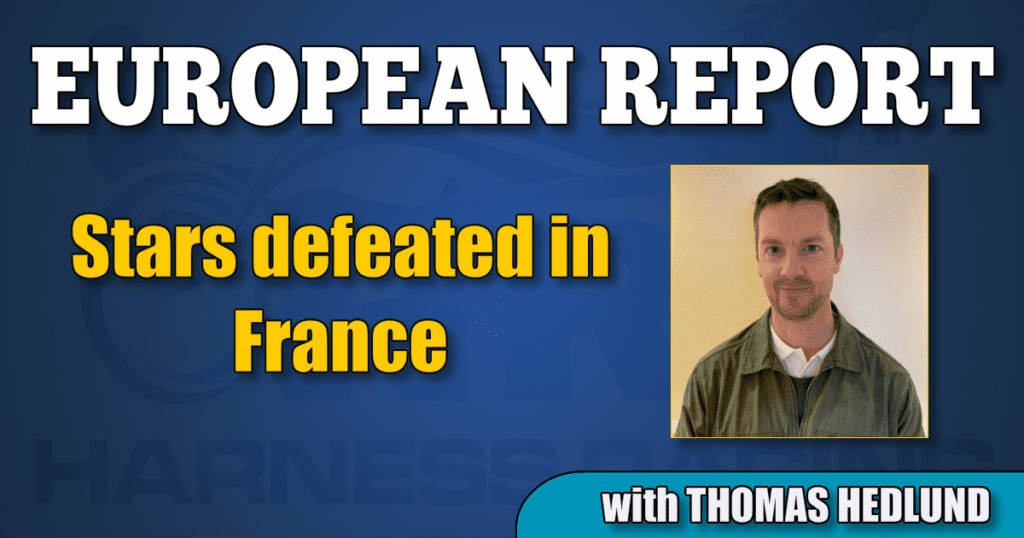 La Capelle is a mile track and when the car left the field of seven trotters, the drivers behind Bold Eagle and Aubrion du Gers immediately started a war where the mission was to get the lead.

Bold Eagle started inside of Aubrion du Gers and Björn Goop succeeded to defend front position throughout the first turn, but Jean-Michel Bazire continued to put hard pressure on the outside and the two giants’ struggle made it possible for Sébastien Guarato-trained Valko Jenilat (Kepler) to seriously challenge the duo in front.

Aubrion du Gers got control over the race in mid home stretch while Bold Eagle showed that he was marked by the tough run in the race’s opening.

But from second over, Valko Jenilat used his strength and passed a brave Aubrion du Gers just before the wire and won in 1:53.4. Billie de Montfort finished quickly and was not far behind Aubrion du Gers in third.

The $178,300 Ulf Thoresen Grand International was held at Jarlsberg racetrack in Norway on Sunday July 7 and the 1.3 miles long race became spectacular.

With several great horses in the field, positions in the race should have been a deciding factor, but with all facts on hand, the outcome was nothing that anyone could predict, even with just a quarter of a mile to go.

Racing Mange flew to the lead when the car accelerated and established quickstarter Ringostarr Treb was not close to defend front position when Racing Mange’s driver Joakim Lövgren put the turbo gear in his horse.

But Racing Mange got a bit eager by the move from start and the pace was pretty high with Voltaire Gifont on the outside. Makethemark had to leave second over and attack three wide early at the back stretch and behind him, Handsome Brad and Queer Fish followed.

Behind them, three wide, from fifth over, Jorma Kontio did what he could to try to get Italian star and Oslo Grand Prix winner Vitruvio (Adrian Chip) into the game for real, but the duo had many lengths to pick up when the field turned for home stretch.

Makethemark seemed to cruise to quite a safe win mid home stretch, but from out of nowhere Vitruvio showed up and Alessandro Gocciadoro’s 5-year-old sprinted “twice as fast” as his opponents the last 100 meters and the victory was safe at last. Vitruvio won by a length in a mile rate of 1:53.4. His performance in the stretch will long be considered classic.

“In the last turn I just thought about getting a piece of the prize money, but this horse is just fantastic,” said Jorma Kontio, who was proud to honor Norwegian champion driver Ulf Thoresen — by many fans considered the best driver in the world.

Ulf Thoresen died at age 46 in 1992 and was well known for his ability to get trotters going the whole way by using almost imperceptible movements in the bike. In the U.S., Thoresen won Hambletonian with Per Henriksen’s Nuclear Kosmos in 1986 and the same year, he won the International Trot with Roger Walmann’s Habib.