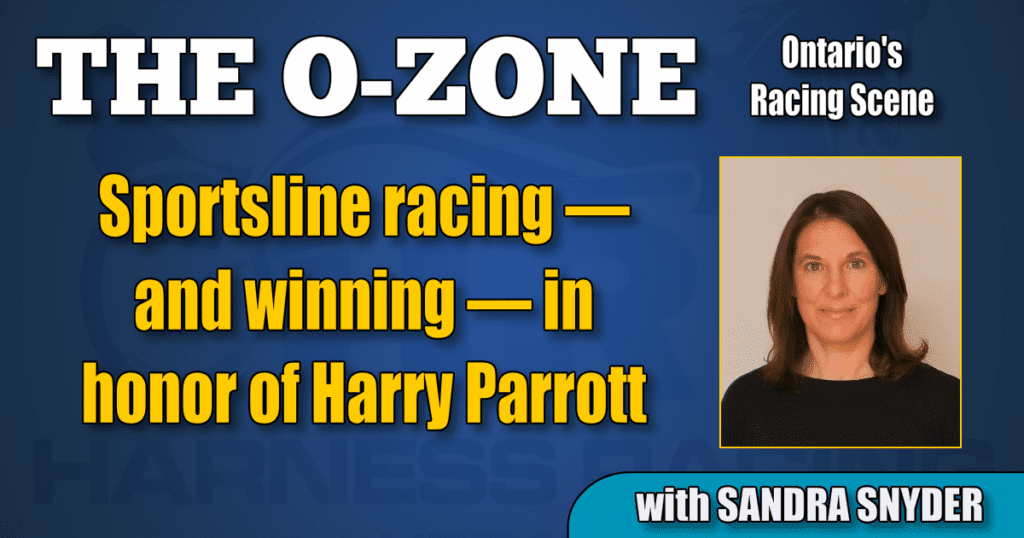 Sportsline racing — and winning — in honor of Harry Parrott

Four days after Harry Parrott died, the horse he campaigned in partnership with trainer Jim Watt made a miraculous comeback to win his ninth straight race.

When 3-year-old pacing colt Sportsline won his ninth straight race on Saturday, July 6, he and driver Trevor Henry were met in the Woodbine Mohawk Park winner’s circle by a jubilant crowd. The hugs and smiles shared by the group had less to do with Sportsline’s win however, and more to do with the man they were there to celebrate, part-owner Harry Parrott, who died on July 2.

“All the grandkids were there, the family members and they had a celebration of life for Harry,” said trainer Jim Watt. “And if you watch the replay (available here), Sporty was locked in with nowhere to go. Trevor tried to come up the rail, couldn’t get him up the rail, tried to go to the outside, couldn’t get him to the outside. The horse was locked in, he was beat. And then just 15 feet before the wire a horse on the outside kind of drifted out, couldn’t keep up, and out comes Sporty and boom, he was just gone with that quick turn of foot he has.

“So all the grandkids came out and got their picture taken, there was a big celebration in the winner’s circle, it was quite emotional that the horse won. The racing gods, they just seemed to say, ‘Okay we’ll give him this one.’”

The path to Saturday’s winner’s circle celebration started in 2012 when Parrott moved to Clinton with his bride Donna Wood and found himself in need of something to do during her weekly bridge games. New son-in-law Ian Fleming suggested Parrott get another horse and pointed him toward Clinton resident Watt.

“Harry came to me and said, ‘Would I be interested in getting a horse with him?’ And I said, ‘Well, I usually don’t take on outside owners, but if you want to own a horse with me Harry, then there’s just one stipulation. You have to be actively involved in the relationship with the horse. I don’t want to have an owner that just phones up once and month and says — the horse finished seventh, what happened?’” Watt said. “I said, ‘You need to know what happened, you need to follow the steps, you need to be there to make decisions with me so that it’s not solely on me.’ And that’s what Harry was looking for too, he wanted to be actively involved, so that forged our relationship.

“We bought a couple yearlings and they got to the races, they were okay, and as racehorses tend to do, they come and they go. We had a couple cheaper claimers and they got claimed and whatever, and then we got Sportsline.”

After visiting several breeding farms in the fall of 2017 the pair arrived at the London Selected Yearling Sale with a list of horses they felt they could afford. Sportsline — a son of Sportswriter out of the Camluck mare Angel In Disguise, who earned $302,749 in her career and had produced $460,862 winner Hard To Mach (Mach Three) and $188,363 winner Angel Of Desire (Real Desire) from eight foals — was not on that list.

“We were always looking for a Camluck—Artsplace cross, so Harry had dog-eared this horse and I said, ‘Oh geez Harry, we’ll never be able to afford this horse,” said Watt. “So then he came on earlier on in the sale and Harry and Donna were sitting in front of me and the bidding was low, it was like $7,000, $7,500, $8,000. Harry kind of looked at me in disbelief and then he turned back to the auctioneer, and I bid when Harry wasn’t looking,” said Watt with a laugh.

“So all of a sudden the horse gets knocked down and sold for $10,000 and Harry looks back at me in total disbelief, ‘How could that horse have gone so cheaply?’ And I just looked at him and said, ‘Oh it must have a conformation problem or there must be something wrong with it, Harry.’ Harry turned back and then all of a sudden the lady comes over from Standardbred Canada to take my information and he looks at me with these great big wide eyes and said, ‘Did we just buy this horse?’ And I laughed and said, ‘Yeah, he’s ours Harry. We better take a look at him.’”

When they went to look over their newest acquisition they found a correct horse, a bit on the small side and with one testicle that had yet to descend, two factors Watt surmises may have contributed to the colt’s modest price tag. Whatever the cause, the partners were delighted with their purchase and excited to see how the colt would fare in training.

As the colt learned his early lessons and started training in earnest, Watt says Parrott would often ask him what they had, what Sportsline might be able to accomplish on the racetrack. The trainer would report that the colt was doing everything right, doing everything he was asked, but says he never imagined he was training a horse capable of what Sportsline has accomplished in his 20 starts. In fact, the colt was a bit late getting started as a 2-year-old because he was bearing in on the turns at Clinton Raceway and bearing out in the straightaways. Watt was reluctant to qualify a horse with steering issues, but a conversation with Leslie Joyce and driver Rob Doyle convinced him to make the leap in early July.

Doyle schooled the colt twice at Clinton for Watt and Parrott and then qualified him at Hanover Raceway on July 21, finishing third by 14 lengths in 2:01.1. Through all three outings, Sportsline had behaved, so Watt entered the colt in the non-winners of $2,500 class at Clinton on Aug. 5.

Starting from the trailing Post 8, Sportsline sat last through much of the race and then tipped out three-wide on the backstretch and circled the field, cruising home a two and one-quarter length winner in 2:02.1.

“Harry was in the grandstand watching with his nephew and Harry was having a little trouble following the race so he said to his nephew, ‘Where is he, what’s he doing?’ And his nephew said, ‘Well he’s last Harry, they’re heading up the backstretch.’ And Harry was quite upset at that — the horse sitting last heading up the backstretch — because Harry always wants to get a check,” said Watt with a chuckle. “And then in a blink of an eye, without a word of a lie, he went from last to first, and just showed a tremendous turn of foot, and Harry said, ‘Where is he?’ ‘He’s on front.’ ‘No you must be watching the wrong horse, he was just last.’ ‘No, no, he’s on the front end!’ ‘No, what are you doing, tell me where he really is,’ and that kind of thing.”

Following his debut Sportsline would go on to six more wins in 10 freshman starts, earning $20,550 and taking a record of 1:55.2 at Flamboro Downs in the first leg of the Autumn Series on Oct. 3. The colt would get his tongue over the bit in the Autumn Series Final and make a break and when he did the same thing in his first sophomore start on April 1 at The Raceway at Western Fair District Watt, with apologies to the colt, added a tongue tie to Sportsline’s equipment bag.

As expected, Sportsline’s sophomore success attracted a number of purchase offers, but Watt and Parrott were in agreement. They had no interest in selling their star pacer.

“I really didn’t want to sell my share in him, even though it was such a nice offer, because I’ve been in the business for 40 years and it’s been my motivation to get a good horse. I finally got what a lot of people in their lifetimes try to get,” said Watt. “And Harry said, ‘Well it would change my life significantly Jim, if we sold him.’ And I looked at him and I said, ‘What do you mean Harry? How is this going to change your life?’ And he said, ‘Other than my family it’s the thing that keeps me going.’ He said, ‘I spend my days at the computer looking at who we’re racing against, what kind of lines they have, trying to figure out what kind of a trip scenario the horse is going to get, what are our options in the future.’

“For Harry he was a horse of a lifetime too, even though he had accomplished so much in his life, tremendous things politically and things of that nature. It just shows you what kind of an impact horses can have on people’s lives.”

In addition to being a husband, father, grandfather, great-grandfather and horse owner, Parrott served Woodstock, ON, first as a dentist and then as a member of the Board of Education and City Council. In 1971 he was elected to provincial parliament representing Oxford County and would go on to serve three consecutive terms including appointments to cabinet as the Minister of Colleges and Universities from 1975 to 1978 and the Minister of the Environment from 1978 to 1981. Parrott was also an active supporter of a variety of initiatives and charities in Oxford and Huron Counties.

“It’s funny because just here at the Clinton meet (May 19) we’d won with Mostly Dali and Harry was, he was 93 years of age, and he was organizing the picture taking ceremony and telling everybody where to go, and what to do, and where to stand, and that was only like a month ago,” said Watt. “(When he was in hospital) I was talking to Harry, I kept saying, ‘Harry you’ve got to be here for this journey, this is our trip together.’ And he said, ‘I’m not going to be around Jim, what I’ve got’s not correctable.’

“So when you’re putting the article together, make it about Harry, his life, his horse of a lifetime, how much he appreciated the horse at the end,” said Watt after a pause. “I wish Harry was here for the ride, but the nice thing is that the horse had won nine in a row. We were very fortunate, very lucky.”

Sportsline will make his 11th start of the season Saturday night (July 13) at Woodbine Mohawk Park and whether his streak extends to 10 or comes to an end, Watt and Parrott’s family will continue to value their remarkable equine athlete and the special memories he helped create.

A deep selection of handicapping picks for Ontario racetracks — featuring the talents of Garnet Barnsdale, Michael Bozich and Michael Carter — is available on the Ontario Racing website .