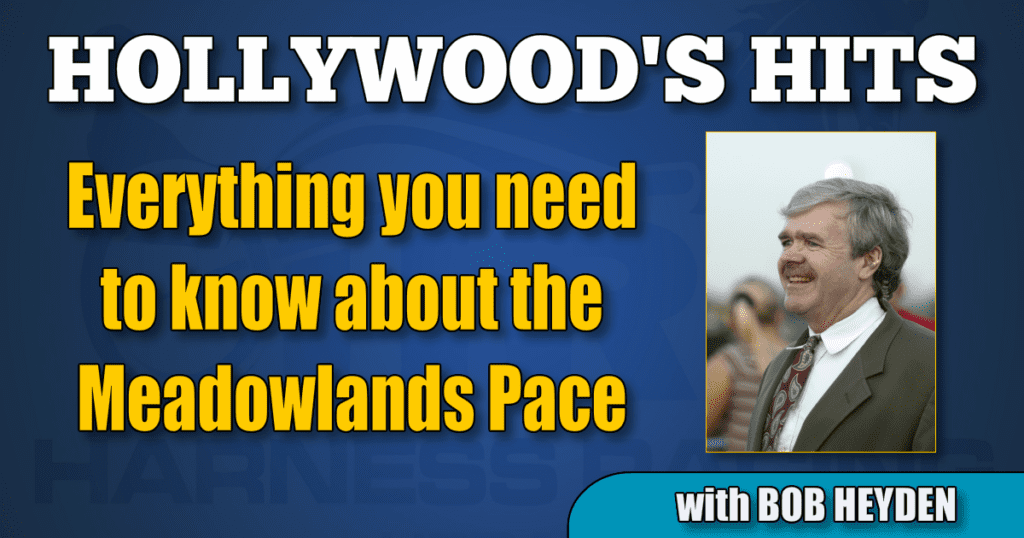 Everything you need to know about the Meadowlands Pace

Notes on this year’s Meadowlands Pace:

2. Linda Toscano, now a Hall of Famer, tries for her first ever Meadowlands Pace with Best In Show. Remember she was third with Share The Delight in the most exciting of all Pace finals in 2008 when Art Official defeated Somebeachsomewhere.

3. Captaintreacherous and Niatross, both Pace winners, are the last two Pacers of the Year at both 2 and 3.
4. First crop winning sires in the past in the Meadowlands Pace:

5. Chris Ryder and Brett Pelling are the Down Under representatives in this field. Ryder is looking for his first Pace victory, Pelling his record fifth. Ryder sent out the favorite 21 years ago in Sealed N Delivered, but he was not up to it and finished last. Pelling won four times in an 11-year span — 1995 Davids Pass, 1997 Dream Away, 1999 The Panderosa, and the last time he was in it with Rocknroll Hanover in 2005. He also finished second that year with Village Jolt. Three of the four Pace winners sent out by Pelling (all except Reigning Deo) also won the North America Cup — 1995-1999-2005

8. A victory by Captain Crunch will mean 30-year-old Scott Zeron will be the youngest ever to win both the NA Cup and the Meadowlands Pace in the same year. Tim Tetrick was 31 in 2013 when he did it with Captaintreacherous. If Zeron wins the Pace this year, he will become the youngest to ever win the Big Five: Hambletonian-Meadowlands Pace-Breeders Crown-North America Cup and Little Brown Jug.

The Meadowlands Pace through the years

Ron Waples turns 75 next week. He once won two million-dollar races four days apart in 1983, including a Meadowlands Pace. He won the Sweetheart with Shannon Fancy and the Meadowlands Pace with Ralph Hanover.

The five-horse entry headed by Nihilator in 1985 — of which $881,000 was bet to show — finished 1-3-4-5-6-with Chairmanofthebord spoiling the party slipping in for second for Skip Lewis and Ben Webster.

Tim Tetrick for Ray Schnittker and John Campbell for Brett Pelling have twice combined to win the Meadowlands Pace. It happened in 2010 and 2017 for Tetrick and Schnittker with One More Laugh and Huntsville. Campbell and Pelling did it with Davids Pass and The Panderosa.

The first to win the Meadowlands Pace from post 10 was also the first million-dollar winner for Campbell — Hilarion in 1982.

Cam Fella was off the board for the last time in his career when he was seventh in the 1982 Pace elims. He never missed the board again and that included his entire 4YO season. But Cam made up for it, big time, by siring the winner of the Pace four straight years:

All but Carlsbad Cam set a new single-season earnings record.

Trevor Ritchie has maybe the best stat from the Meadowlands concerning the Pace and the Hambletonian. He is the only driver to win both while debuting in each. His 1987 drive with Frugal Gourmet was his first in the Pace, as was his debut in the 2000 Hambletonian with Yankee Paco.

Captain Treacherous (2013) and Captain Crunch (2019) are on the verge of becoming the first father-son duo to each win the NA Cup and the Meadowlands Pace. Both races have been won by the same horse seven times before, but never has the sire also done it.

Art Major was inducted into the Hall of Fame this past weekend. He sired the 2018 Pace winner Courtly Choice. His 2002 total of $1.562 million not only led the sport that year, but he remains the only horse to bank that much in a season without ever appearing in a million-dollar race. (NOTE: He began his career with Bettors Wish’s trainer Chris Ryder).