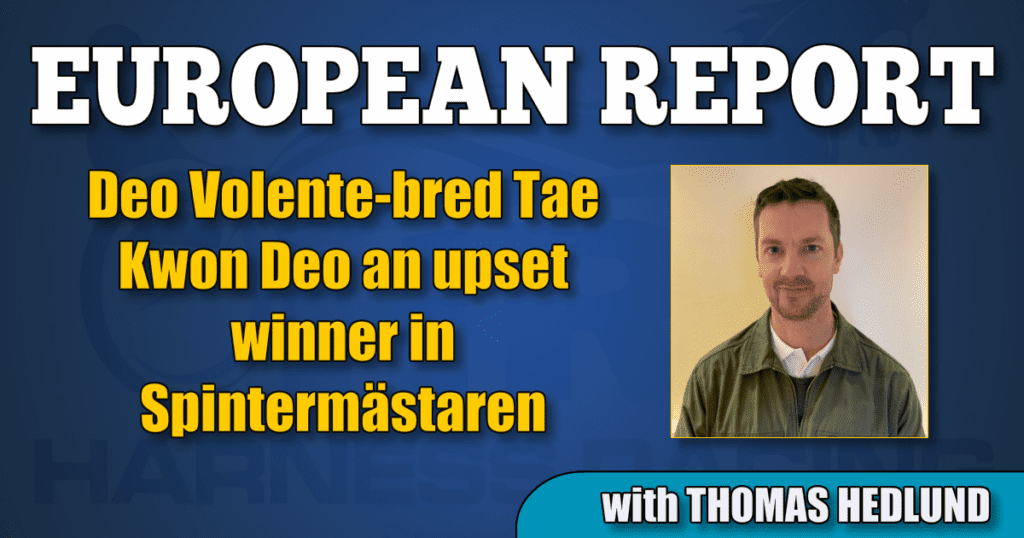 The $225,000 Sprintermästaren for 4-year-olds was on the race card at Halmstad racetrack in Sweden on Thursday night and after three elimination heats, the final was set to be one of the most open events in the race’s history.

Many great trotters have been crowned after their victories in the one-mile race. Among others, Hambletonian winners Scarlet Knight and Perfect Spirit have both been successful in Halmstad’s biggest race and this year saw another Hambletonian horse in first choice position ahead of the eliminations. Evaluate, trained by Stefan Melander, was a disappointment in the first heat. Björn Goop drove the 4-year-old Andover Hall son and despite a perfect trip second over, the horse couldn’t challenge for victory in the home stretch.

First over trotter Night Rhythm held strongly, but couldn’t defend himself when Robert Bergh’s Frenchnorwegian I.D. sprinted to victory in 1:55.4. Evaluate finished third and got a spot in the final.

Robert Bergh was really on his toes this evening and won with Pinto Bob (Maharajah) in 1:54.4 after a nice trip in the second elimination. First-over horse Tae Kwon Deo, who tried his luck for Jimmy Takter in USA last season, made it hard for leader Global Withdrawal and held to second place ahead of Alone.

In elimination three, there was another upset winner when trainer Peter Untersteiner drove Adde S.H. (Nu Pagadi) to victory in 1:55.1. First choice Zephyr Kronos went off stride before the car left the field.

Evaluate picked post number six in the final and got the bettors’ trust once again, but the Andover Hall son was never a serious challenger for the victory. Second choice Night Rhythm went off stride in third over halfway into the race and in front, Robert Bergh let his Pinto Bob trot quite a hard pace considering the conditions in Halmstad this night. Cold and rain, spiced with heavy wind made the race card unusually unpredictable for the bettors and it was a night with several upset winners.

Tae Kwon Deo (Muscle Hill—Brigham Dream), bred by Deo Volente Farms in New Jersey, was, undoubtedly, the best horse in the 2019 Sprintermästaren. The Adrian Kolgjini trained and driven trotter left third over in the last turn and answered by sweeping outside the field in hunt for leader Pinto Bob. It was all set for victory early in home stretch and Kolgjini celebrated his greatest success as trainer and driver since he started his professional trainer career a few years ago. Tae Kwon Deo won in 1:54.

Pinto Bob finished second after a tough trip where he had to go three wide in the first turn before chasing the lead with 5/8ths of a mile to go and Evaluate, who followed the winner’s back in the last turn, took the bronze medal.

“This is my biggest success so far. Many great trainers haven’t won the Sprintermästaren, but I have. We have always believed in this horse after we bought him as a yearling in USA. Then he started his career well as a 2-year-old in Sweden before we sent him back to the U.S. Last season was not what we hoped for and now we had aimed for this race for the last 8-9 months and it feels so nice when we succeeded,” said a very happy Kolgjini after the triumph in Halmstad.

Tae Kwon Deo was originally sold for $240,000 at the 2016 Lexington Selected Yearling Sale.

Halmstad racetrack followed up the Thursday race card with V75 and the $170,000 Stosprintern for 4-year-old mares over the mile on Saturday afternoon and without drama, the victory went to owner Stall Courant and Italian-bred Zeta Wise As (Maharajah), trained by Fredrik Linder and driven by Kevin Oscarsson.

From post number two, Oscarsson was eager to find the front position and after 200 meters of the race, the duo took over the lead from Miss Golden Wine. When in front, nothing much happened and Zeta Wise As cruised to safe win in 1:54.4.

Young driver Kevin Oscarsson, son of Jim, who trained Nuncio the first years in U.S., captured his biggest success at the racetrack so far and owner Stall Courant, Anders Ström, is not afraid to use Kevin in big races.

Stall Courant’s investments in the business are paying back on both sides of the Atlantic ocean. The well-known red and yellow racing colors are seen more and more often in the winner’s circles. Last year, for example, Cruzado dela Noche won International Trot at Yonkers and Courant has great chances in this year’s edition of Hambletonian. Greenshoe, Green Manalishi and Gimpanzee are all partly owned by Stall Courant.

The Suur-Hollola is a special race with semi-finals on Saturday afternoon and final on the following Sunday. A tough schedule for most horses and it takes something extra out of the trotters to keep it up in good shape during two days of racing.

Saturday’s semi-finals saw winners in Nurmos-trained Hachiko de Veluwe (Timoko) and the 5-year-old was sent to the front after a quarter of a mile into the race and via a quick last kilometer, Hachiko de Veluwe came home in mile rate 1:57.1 over 1.3 miles.

Ranch Kelly (Tsar d’Inverne) got a trip in second over for driver Hannu Torvinen in the second semi-final and the mare sprinted to victory by a head in 1:56.2.

A field of 12 trotters gathered around the track of Lahti on Sunday afternoon and Jorma Kontio had his game plan ready when the car accelerated in front of the spectators. Hachiko de Veluwe took the early lead and Kontio had to remind his horse seriously during the last quarter, since first over running Ranch Kelly really wanted to challenge the leader. The outside horse never got closer than a head from the winner, but one can ask how the result might have been if second over trotting Cameron Evo hadn’t lost his gait with 100 meters to go.

Cameron Evo got order of attack with 200 meters to go and seemed to beat the two horses on the inside when he went out of stride.

Hachiko de Veluwe showed great spirit and fought strongly on the inside, which was enough to keep Ranch Kelly a head behind him at the wire. The mile rate was 1:55.1 over 1.3 miles.

This was Timo Nurmos’ fifth victory in Suur-Hollola and driver Jorma Kontio noted his 11th win in the race.

Hachiko de Veluwe is a far from well experienced trotter in Europe. The win in Suur-Hollola meant that the son of Timoko now is 10 out of 11 career starts and once again Nurmos has developed a trotter into a star.

The first weekend in July in Norwegian town Tönsberg is traditionally a meeting point for many harness racing fans in Europe and today (July 7) is the track of Jarlsberg’s biggest event of the year.