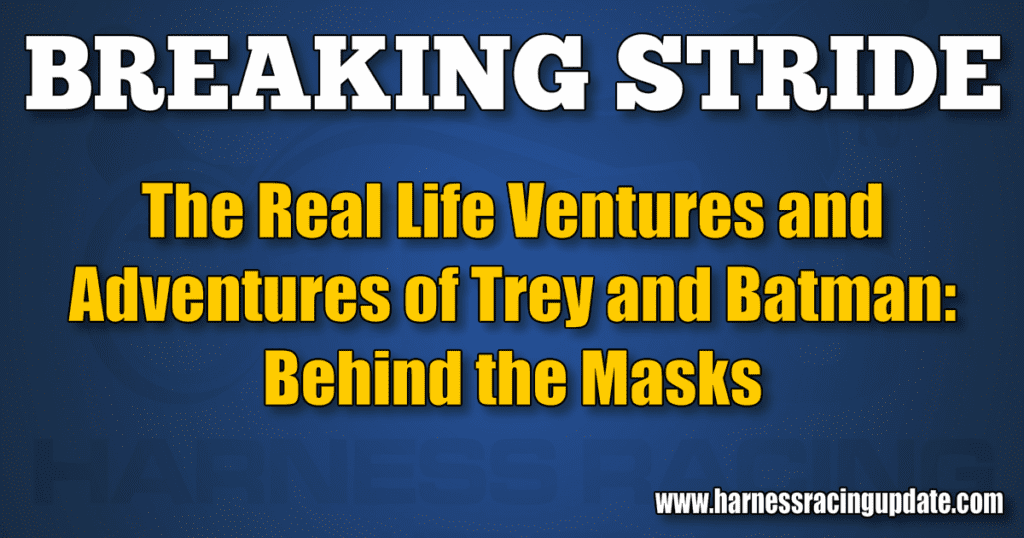 You may be alarmed to learn that aside from pseudonyms, literary license, and occasional exaggerations, this column is 94.7 per cent true.

Trey does indeed participate in harness racing at the fringes. Among his various escapades, he is a gambler, an owner, and a breeder of trotters. He operates on a small scale. Fiscal challenges keep him an enthusiastic minnow, not a whale. The horses referenced are real. The events in these rambles have usually happened, or are happening in real time. Trey is just a person who enjoys the sport, not an expert or insider. You probably know more about this sport than him…er…me.

Batman is the nom de plume of another real person, exactly the type of person we would like to see join our harness racing ranks… alive and with money. He enjoys many sports, has an impressive financial portfolio, and is very technologically literate. He is extremely analytical, retired, relocated, and inquisitive.

Despite dragging him to barns, breeding centers, horseraces, constantly bending his ear, and making him read this ridiculous column each week, he resists the charms of our beloved preoccupation. He has never owned or gambled on harness horses.

We are complete opposites in many respects but we are civil. I do not grab him by the lapels and scream, “Gamble on horse races, purchase a trotting yearling with me, get involved, and have fun.”

This is more than mere civility; he is tall and quite fit. For his part, he does not furrow his brow, point his finger at my nose, and say, “You’re stupid for tossing your money and time away on horses pulling goofy carts in circles.”

Jokes aside, and we do banter, something keeps me in our game, and something keeps him out of our game. Whatever drew me in has not enticed him. Much of the dialogue on this site is an attempt by me to go deeper into the mind of a non-believer, to look at our sport with new, fresh eyes and a mind not infected with the racing virus.

Here is a recent example of some repartee –

After a rambling preamble, I asked him a simple question.

“Gambling on the races and owning horses are thinking games. They are intriguing to me, but you avoid them the same way I avoid gainful employment. I try to put myself in your head to figure out why you do not get involved. Here is a simple list of obstacles that might stop you from joining me in the world of trotters and pacers. Give me one of these that I can work with…”

One by one, I ran through a list, “Losing money… animal rights… cheating… drugs… time…. learning curve… feeling like it is too complicated or too intimidating.”

He thought for a second and replied, “Learning curve is directly related to time involved, since like Sgt. Schultz, ‘I know nuthink!’ The data you pour over is intimidating. A newbie would be throwing money away trying to compete with buyers or gamblers who have in-depth knowledge of the sport. “

With a frown, I shot back, “I asked you for ONE reason, you gave me five smackdowns. I see that your conversion to the dark side will not be easy. Let us take, ‘I know nuthink,’ which, by the way, was not even on the list. To me, this reason does not abide. In my delusional world, NOT knowing anything is the best part. Nobody knows anything before they know something.”

I said, “Four years ago, I did not know anything about Snooker. I never saw a frame or a match. I didn’t know the rules, didn’t know a single player, didn’t know the Crucible from a containing safety to bulk at dead weight using the spider. Today, I am quite snooker literate. I don’t sacrifice my other vices, I just add to the list. I can vouch for the concept that spending massive amounts of time and money as an ignorant fool is quite refreshing.”

He turned the table and asked, “So why did you get interested in snooker?”

This made me pause, “I don’t know, I think I stumbled across the game on a YouTube video. No wait, wait, now I remember, it was a magazine article, a New York Times article about a snooker player with an unusual backstory. The article made the player out to be some sort of genius savant. After I read the story, I went to YouTube to see him in action and to see what the sport was all about. I watched a few matches. That got the snooker ball rolling. Things snowballed from there.”

I got philosophical, “You know, these are amazing times we live in. Twenty years ago, I would have read that article about snooker and it goes nowhere. Today, without leaving the couch, you can go deep into a new sport or hobby. My quest is to lead you deep into harness horse racing.”

He shook his head, “An impossible quest my friend, you are tilting at a windmill.”

“Hey man, windmills are what we do in harness racing. Plus, you may recall that Don Quixote wound up on a horse named Rocinante and his pal, Sancho Panza, rode a donkey named Dapple. They had legendary adventures – just saying.”