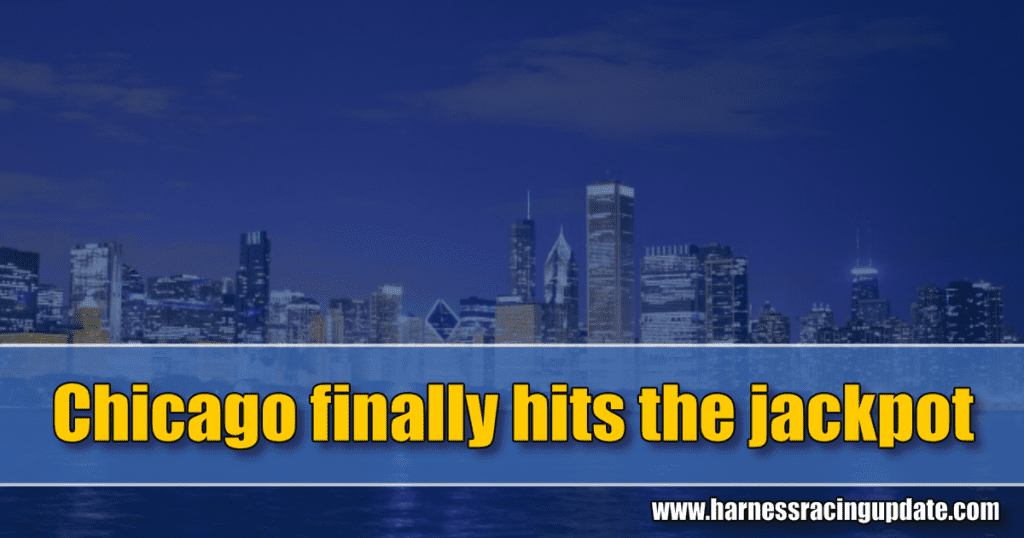 Slot machines, table games and sports betting are coming to Hawthorne Race Course as part of a massive multi-faceted gambling expansion bill passed by the Illinois legislature at the conclusion of its spring session.

Hawthorne — which is conducting a 71-night meeting that will continue through Sept. 22 — is the state’s only standardbred track with an extended meeting after bankruptcy forced the sister tracks Balmoral Park and Maywood Park out of business following their 2015 meetings.

However, the current situation that is limiting Hawthorne to five months of harness racing because it also has spring and fall thoroughbred meetings, is certain to change because the bill permits a new harness racing/gaming venue to be built in one of seven suburbs south of Chicago.

There are guarantees on racing dates. The law stipulates that if only one harness track (namely Hawthorne) is operating in 2020 it can race between 80 and 100 dates. If the second track opens in 2021, the number goes up to a combined minimum of 160 dates and then in 2022 it would increase to 200.

Sports betting will be permitted at three off-track betting parlors operated by each of the state’s three racetracks — dual-purpose Hawthorne and the Arlington International Racecourse and Fairmount Park thoroughbred venues.

The General Assembly was scheduled to adjourn on May 31, but lawmakers extended the session, enabling the House of Representatives to pass the monumental gambling bill on June 2 and the Senate to give its approval on June 3.

All that remains is for new Governor J.B. Pritzger to sign the legislation. That’s considered a certainty in view of the fact that he was the driving force behind this and several other major bills that the Democrat-controlled legislature passed — often with bi-partisan cooperation — as the legislators approached the session’s finish-line. This is in stark contrast to the gridlock and hostility that were a constant throughout the four years that his Republican predecessor, Bruce Rauner, was the governor.

The gambling bill amendment to previous laws on the books contains 716 pages and has a clarifying amendment of 816 pages.

“There’s not a better deal in the country,” said Tony Somone, executive director of the Illinois Harness Horsemen’s Association (IHHA), referring to the financial windfall the legislation is expected to have for horse owners, trainers and breeders. “Of the gross revenue from the slots and table games (at Hawthorne and the new harness racino) a minimum of 12.75 per cent will go to purses. That’s the best percentage of anybody. And as the tracks do better our percentage goes up.

“We’ve worked so hard for this for so long. I’m ecstatic that this piece of legislation will allow harness racing to thrive in the future. I’m looking forward to restoring the pride in Illinois harness racing and bringing back the breeding industry.”

Not only will the bill transform the Illinois racing landscape by enabling Hawthorne to compete with racinos in Indiana and Ohio it also will have a dramatic impact on casino and on-line betting in Illinois.

The state’s 10 existing casinos can expand up to 2,000 gambling positions (an increase of 800) and conduct the newly-legalized sports betting. Six new casinos with sports betting will be allowed to open in Chicago, the city’s south suburbs, Waukegan, Rockford, Danville and Williamson County.

The Chicago casino can have up to 4,000 positions, making it the biggest in the state. The city has the option of using some of these positions to install slots at what would be tantamount to branch offices at O’Hare and Midway Airports.

Illinois sports venues with more than 17,000 seats — such as Wrigley Field, the home of the Chicago Cubs baseball team, and the United Center, where the Chicago Bulls basketball team and the Chicago Blackhawks hockey team play — also can obtain licenses to conduct sports betting. The number of these licenses is limited to seven.

A sports betting license will have an initial cost of $10 million. Thereafter, it can be renewed every four years for $1 million. The state will get 15 per cent of the revenue after payouts. In Cook County an additional 2 per cent will be withheld with the additional money going to the offices of the Cook County Circuit Court, state’s attorney and public defender.

Hawthorne’s Tim Carey, who is the president of the family-owned track, said his priority “first and foremost is the sports betting license” and he hopes to be taking bets by Sept. 1.

“We’re going to apply as soon as we’re able to,” Carey said. “Because we thought (casino gambling at the tracks) was going to happen in 2010 and again in 2013 we have a master plan and have spent quite a bit of time on drawings. Now, we’re working on putting a sports betting venue in our master plan.

“We’re contemplating putting the sports book on the first floor of the grandstand, separate from the casino. We’re going to build a parking garage on the second level and people will be able to walk from there right into the beautiful gaming room floor on the second level.”

Carey envisions that the casino phase of the venture will completed by September or October of 2020 — “possibly sooner so we can generate money for the purse account and breeding that’s so desperately needed.

“My intent is to build horse racing, which is the whole idea behind this legislation. We have 11 OTBs and we’re allowed 16. I want to open more so we can introduce more people to horse racing. We’ve heard the phones at the Department of Agriculture are already ringing off the hook with calls from people who want to come back to Illinois and race.”

On-line wagering has been confined to horse racing, but under the law it will be expanded to include a complete menu of sports betting for three licensees selected by the Illinois Gaming Board. The cost of a license is $20 million.

Rules governing on-line sports betting and the sports betting at all of the venues will prohibit wagering on games involving teams from Illinois colleges and universities. There also is a ban on contests involving athletes from kindergarten through grade 12.

While the amount of adjusted gross revenue casinos at racetracks must allocate to horsepeople is written into law, the horsepeople will have to negotiate with the tracks to get a cut of their sports betting booty.

“We’ll figure out something and it’ll be successful, but I don’t think it’s going to be a lot of money for horsemen,” Somone said.

The legislation even extends to the Illinois State Fair meetings at Springfield and DuQuoin, allowing them to have video gaming terminals in their beer tents. Springfield will be allowed 50 and DuQuoin 30 and 15 per cent of the take will be earmarked for purses at these two state fairs and the county fairs. A Standardbred Advisory panel made up of representatives of the IHHA, the Racing Board, Department of Agriculture and the tracks will decide on how to split this amount.

An added benefit to slots at the racetracks is that their legalization will end the much-maligned Recapture provision in the 1995 law that allowed Illinois thoroughbred and harness tracks to conduct full-card simulcasting. It stipulates that if wagering on live racing is less than 75 per cent of the 1994 total, tracks can “recapture” 2 per cent of this amount from the horsepeople’s purse account.

Every year since then, the amount has been under 75 per cent, letting the racetracks extract in excess of $284 million from thoroughbred and standardbred purse accounts.

“It will end when the first nickel is deposited in a slot machine,” Somone said. “That’s when it will stop accumulating. Let’s say under the best circumstances we have these things up and running sometime next year: what we would have to pay in 2021 is what we owed prior to that (2020 stoppage). The following year recapture (payments) would stop completely.”

The IHHA executive director said that since Balmoral and Maywood closed his organization has “had inquiries” from entities expressing an interest in building a harness racino if legislation permitting slot machines at the racetracks was enacted.

According to the Chicago Sun-Times, “the early favorite to land the racino is commercial real estate developer Rick Heidner, who also is an owner of Gold Rush Gaming.” (Gold Rush Gaming is one of the state’s largest operators of the video gambling terminals in restaurants, convenience stores, truck stops and veteran’s and fraternal organizations that were legalized in 2009 and launched in 2012.)

“You have to be a racetrack first to get a casino,” Somone said. “A new track would have to get an organizational license from the Racing Board and apply for racing dates. Once they apply and are awarded dates they are a racing licensee, which allows them to be eligible for slots and table games.

“Then, after being approved by the Gaming Board, they’d have to go back to the Gaming Board to get a sports betting license. It’s unclear at this point if the new racino could get a sports betting license because there are only seven out there and they will go to the three racetracks and four casinos (which are the biggest revenue producers among the 10 in the state).”

Although Illinois harness horsemen have reason to believe they are on the road back to national prominence they have a lot of ground to make up.

Even with the guaranteed dates the opportunities won’t be anywhere near as abundant as they were historically. From 1968 through 2015, there was harness racing for at least 11 months a year (except for those years when contract disputes produced stoppages). In 1995, an all-time high 516 harness programs were held at Hawthorne, Maywood, Balmoral and Sportsman’s Park.

However, all over North America the racing climate will be much different in the 2020s than it was in the “good all days.”

What this week’s massive and multi-faceted gambling expansion legislation has done is enable Illinois harness racing to survive and perhaps ultimately to thrive.