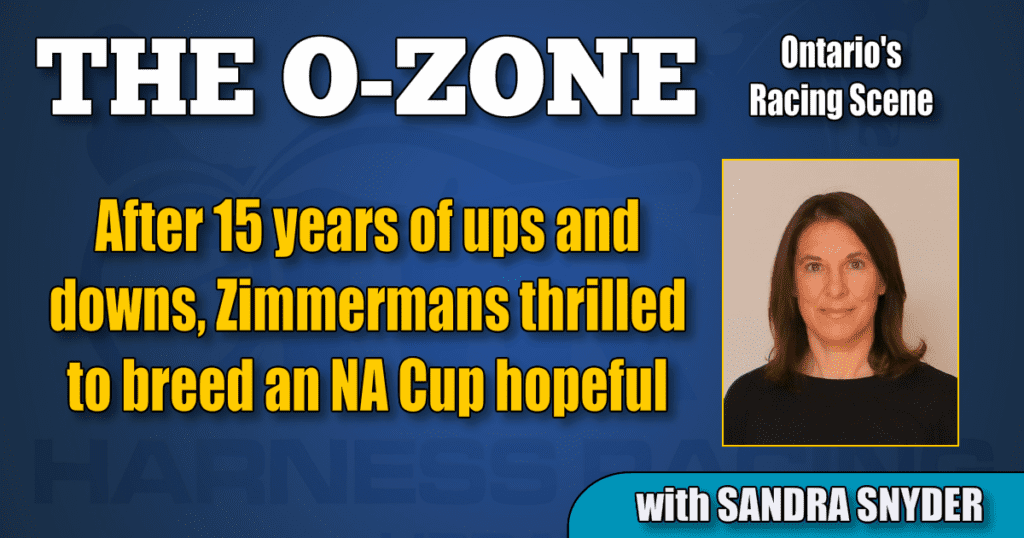 After 15 years of ups and downs, Zimmermans thrilled to breed an NA Cup hopeful

Sanford and Jan Zimmerman are reveling in producing their first Pepsi North America Cup hopeful, Century Farroh. Now the couple that operate Century Spring farm in Gorrie, ON are hoping the colt can qualify for the $1 million final as stakes season kicks off this weekend at Woodbine Mohawk Park.

For the next 10 days, harness racing fans from across North America will be focused on Woodbine Mohawk Park as the Campbellville, ON oval prepares for the biggest night on its racing calendar.

Among the people paying special attention to the events at Woodbine Mohawk Park are Sanford and Jan Zimmerman. Standardbred breeders based in Gorrie, ON, the Zimmermans will be tuning into the June 8 broadcast to watch Century Farroh compete in the North America Cup eliminations, the first horse with their Century Spring pre-fix to ever make a bid for Ontario’s $1 million prize.

“There have been several good ones that we’ve raised, and that we’ve bred too, but with him going into the elimination for the North America Cup we haven’t had anything like that that we’ve bred ourselves. So, he’s certainly standing out a bit that way,” said Sanford. “I hope he can qualify for the final, that’s all I can hope for.”

The Zimmermans have been aware of Century Farroh’s recent success — the son of Mach Three and Beachy Girl is undefeated through his first four sophomore starts — but they have yet to see him compete in person. If the colt advances to the final however, they will press pause on their farm chores and head to Woodbine Mohawk Park to cheer him on.

“We just finally finished foaling a week ago and we’re still breeding some, and there’s some construction here. We’re putting up a building for a horse exerciser and they’re working away at that so it’s been very hectic lately. And then with the colder weather the mares and babies haven’t really been able to stay out until a week and a half ago. So, there’s more work… We haven’t really been anywhere for quite a while,” Sanford said with a laugh. “But we do like to go down and if he gets to the final, yes, we’ll definitely be there.”

The Zimmermans acquired their first broodmare in 2004, one year after their wedding and one year before they decided to transition their historic Huron County farm from dairy cattle to standardbreds. Sanford’s father, Harry, had kept a few standardbred mares on the farm as a hobby prior to his passing in 1995, but shifting to a full-time equine operation required a retooling of the barn and surrounding pasture and for one year Lady Sammie (Jennas Beach Boy–Autumn Mindale) was the sole occupant.

Once the rebuild was complete, Century Spring Farms opened its doors with a focus on boarding standardbreds and the Zimmermans started to expand their broodmare band.

“Things slowly kind of grew, we ended up with four or five mares and boarders, and then when 2012 came along, that really changed things. The boarders were slowly leaving, and the writing was on the wall. The business was getting smaller and we had this facility and we said, ‘What do we do?’” said Sanford. “We really didn’t want to get out. We thought things may change, we didn’t know for sure, but we thought, ‘Well, we’ll have to start buying more mares of our own. If we don’t have boarders, we’ll have to have more mares of our own and if we have to sell all U.S., I guess we’ll have to.

The transition, their second in less than a decade, required the acquisition of new skills. Four years ago, Jan attended an equine ultrasound course in Texas and the couple acquired their own ultrasound machine. Sanford said his highly-capable partner now handles most of the health care needs for their herd and is continually adding to her knowledge. They have faced many of the challenges commonly faced by breeders, along with a few situations that required a Sherlock Holmes-level commitment to problem solving.

“This mare, Lady Pixie, we actually found out through trial and error that, I think, she’s allergic to a type of semen extender,” said Sanford, who had observed that the Yankee Glide–B Cor Peatra mare caught easily when bred to U.S.-based stallions, but either did not catch or quickly absorbed the embryo when bred to Ontario-based studs.

After being assured by two different veterinarians that Lady Pixie did not have any medical problems that prevented her from getting in foal or carrying to term, Sanford wondered if the issue was the product that extends the viability of semen. With the help of breeding staff at Tara Hills Stud and Hanover Shoe Farms he discovered that semen shipped from the U.S. to Canada requires a different extender than what is commonly used in domestic shipments. With support from Tara Hills for Lady Pixie’s 2017 breeding, the extender used for international shipments was added to Muscle Mass’s semen and the mare caught on the first attempt and delivered a healthy filly last spring.

“When she was catching almost with ease to U.S. (studs), I said there’s got to be something going on here. And the only thing I could think of is if it’s a different extender, because it was three different studs up here — Kadabra, Royalty For Life and Muscle Mass,” said Zimmerman. “And then when we used that extender up here to Muscle Mass again, and she caught right away.”

While his accumulation of knowledge produced a positive outcome in Lady Pixie’s case, albeit at a significant loss to the mare’s productive years, Zimmerman admits that there have been some tougher moments over the past 19 years.

“Things that you learn along the way, some are kind of weird, but if you keep plugging away you’ll see a lot of different things. Some are pretty heartbreaking, but it is part of the business. There’s times, especially when we started we lost, in two days, two mares, they both had bad foalings and had to be put down and it was like, ‘Why are we even doing this?’” recalled the breeder. “You either quit or you keep going, and you say, ‘Well I’m not quitting so…’ You have to toughen up, you just do. Foals die, and it’s too bad, but you just move on, there’s nothing you can do about it and if you can’t do that you probably won’t stick in it. It’s high risk, high reward, but sometimes the downside can drag along a lot longer than the good side, so you have to be optimistic.”

Risk taking is built into horse racing at every level and Zimmerman says breeders are no different. Almost every decision involves some level of chance, whether it is deciding which mare to buy or sell, which stallion to match with each mare or which yearling sale to attend.

“If it was as simple as the best mares breeding to the best studs made the best racehorses, most of us wouldn’t be in the business,” he said. “It’s kind of not the shots in the dark, but that the average-bred could throw a good one, that keeps everybody going. You don’t know where they’re going to come from.”

The Zimmermans typically make their decisions about breeding match-ups and whether to alter the composition of their broodmare band after their last yearling sells, which is usually at the Harrisburg Black Book Sale in November. At that point, they assess the results of the sales, calculate potential expenses on stallion fees and examine the broodmare catalogue. The breeder says the expansion of the farm’s broodmare band has actually made the annual process an easier one.

“The more you have, the more flexibility you have. If you’re relying on one or two mares it’s pretty tight. Say you want to breed one mare to this stud and his stud fee is $15,000, it’s really a lot of money, but if you average out all the stud fees you are paying and your average stud fee comes to $6,500, even with that $15,000 one in there, it’s really not that bad. Things start to average out a little better,” he said. “But just to have one mare and breed her to that stud and get a crooked foal, it’s just a higher risk. The numbers can help a little bit with stuff like that.”

With 15 mares, the Zimmermans typically have nine or 10 yearlings to offer buyers each fall. The odd time they will retain a daughter of one of their top mares, but most years everything bred on the farm is headed to a sale, either the London Selected Yearling Sale or Harrisburg. They prefer to sell their Ontario Sired yearlings in London, which is where Dave Ratchford acquired Century Farroh for $17,000 in 2017.

On Saturday, the colt will step up to the biggest test of his young career from Post 9 in the first $50,000 North America Cup elimination, carrying the hopes of his owner, breeders and supporters from across Ontario.