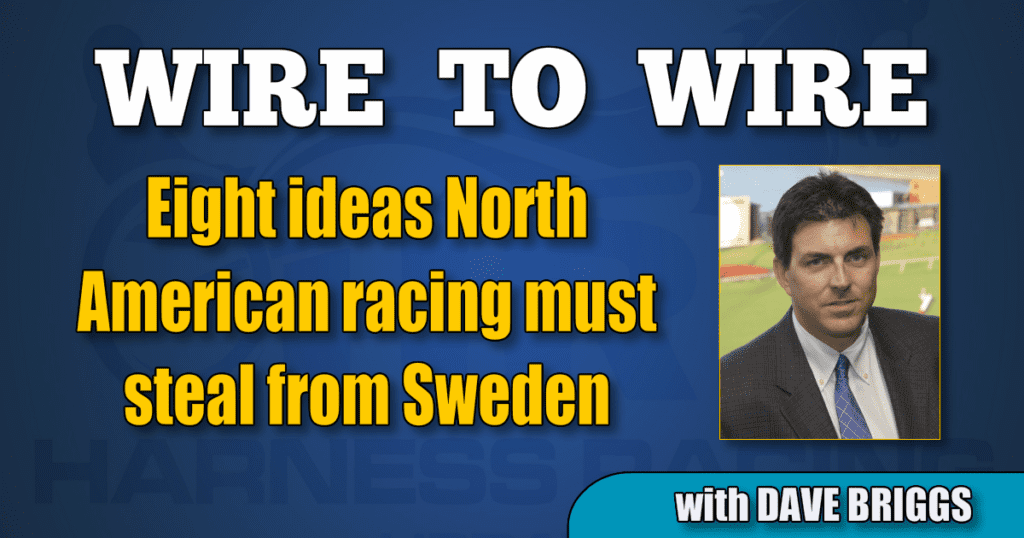 Racing in Sweden makes much more logical sense on a number of fronts critical to growing handle. Here’s the top ideas that should be adopted in the U.S. and Canada to improve our betting product.

As North American handle continues to decline, industry leaders should look to Sweden for creative solutions for sustaining the sport. Much about the way the industry functions in Sweden makes the kind of logical sense sorely lacking in the U.S. and Canada. Here’s eight ideas North America should adopt immediately from Swedish racing:

A lottery system built around horse racing, not ping pong balls, is the lifeblood of Swedish racing (full story here) and is built on a national distribution system that gives the sport outstanding exposure. The V75 (and its sister wagers that require people to pick the winners of multiple races at the track) is playable in grocery and corner stores throughout the country, watchable on national broadcast television — and regularly covered on sports reports — and is as essential for maintaining national interest in horse racing and preserving agriculture as it is for growing handle. North America simply must find a way to emulate it to make horse racing self-sustaining.

Swedes can be a no-nonsense people by nature, so it makes sense that when they say the post time is 7:35 p.m., the post time is 7:35 p.m., complete with countdown clocks. Post-time drag is a completely foreign concept in Sweden — as it should be — and punters have no problem getting their bets in on time. Apart from making it a more honest gambling process — and shouldn’t transparency in gambling always be tantamount? — simply sticking to running races every 22 minutes, as they do, for the most part in Sweden, allows fans to easily calculate how long a race card will last and get home to their families in a reasonable time. In an age where time for leisure activities is increasingly precious, racing at the posted time increases the likelihood of people being return customers.

Here’s an interesting Swedish concept: trainers rank multiple drivers on horses and then those drivers with choices to make pick their horses BEFORE the draw is conducted. What a boon to the handicapping process it would be in North America to have drivers trying to pick the best horses regardless of post position. Yes, race offices would have to work a little longer, but technology can help considerably. Besides, shouldn’t the race office’s first priority be to craft the most bettable races? The end result is worth that effort.

This one, again, is for the handicappers. Rather than saddling a trailing horse with having to start behind the rail horse, as is the rule in North America, in Sweden the first trailing horse has a starting slot behind the first two horses on the gate. For example, in a field of 10 in Sweden with eight on the gate, the #9 horse would start behind the #1 and #2 horses and the #10 horse would start behind the #3 and #4 horses. This gives drivers of trailers more options to get involved in the race, gives handicappers more to think about and puts more horses in play to grow pools.

The turns at Solvalla and other Swedish tracks are banked so high one has to be careful when walking on the outside edge of ovals lest you take a serious tumble. Banked turns, particularly on tracks smaller than a mile — Solvalla, the biggest track in Sweden is a five-eighths — allows more horses to make moves in the turns and, again, puts more horses in play for the bettors. Since most of North America’s tracks are smaller than a mile, banking the turns even more is an important equalizer.

Softer track surfaces decrease both lameness and vet bills. Yes, a softer surface can be an antithesis of speed, but remember, how fast a race goes doesn’t grow handle. In a time when horse shortages lead to smaller fields which directly decreases handle, moving to more forgiving track surface is critical to keeping horses on the track longer.

Swedish races are contested at a wide variety of distances, making for an extra handicapping challenge that, again, drives handle.

In Sweden, drivers can only use the whip a maximum of four times in the last quarter-mile and must keep a line in each hand the entire race. Not only does this present a better image to customers and animal rights activists — a growing adversary as evidenced by the Santa Anita saga — science has proven that whipping horses has a limited effect in encouraging a horse to go faster, so why do it? Yes, many North American jurisdictions have — or are heading toward — stricter limits on whipping. Not only must that trend continue, it needs to be accelerated.