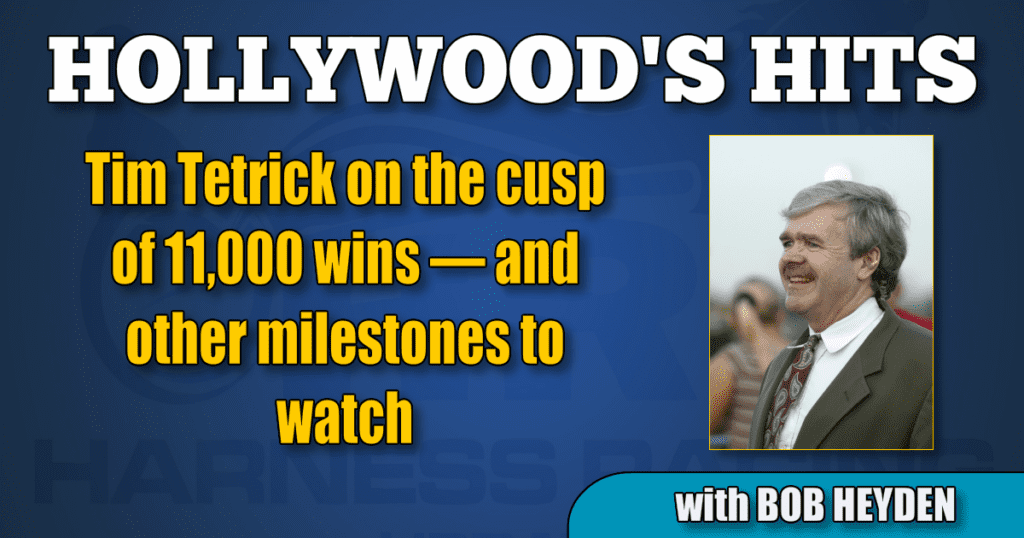 Tetrick poised to hit 11,000 wins, and other milestones to watch

Aaron Merriman has moved into #7 all-time in wins with 11,320 surpassing Bill “Zeke” Parker at 13,311.
Seven of the top 12 dash-winning drivers of all time are retired.

Brian Sears is about half-a-million dollars away from cracking the top 5 for the very first time in career earnings.

There are 17 members of the 10,000-win club They are all drivers. Burke is poised to become the first trainer to reach this number.

Virgil Morgan, Jr. and Mark Ford are in a good duel for who has the second most starters of all time (behind Burke, of course).

No other driver has had two Hambletonians at a similar age. Tommy Haughton came the closest. Haughton’s Hambletonian stats:

Zeron has had two other Hambletonian drives:

2015 Billy Flynn 8th in elimination at 48-1  2017 International Moni won his elim then was wiped out in the final.

All his Hambletonian drives have been in the two heat format.

• Tetrick won the 2012 Hambletonian with Market Share
• John Campbell won the 1985 Breeders Crown with Sandy Bowl and Prakas
• David Miller debuted in 1995 finishing fifth in the Meadowlands Pace from post 10 with Cinder Lane Sam
• Ted Wing was the 1978 Meadowlands leading driver with 178 wins.

The 2016 Hambletonian was not only Zeron’s breakthrough in the sports classic event, it was his greatest day. He wrapped up his first Meadowlands driving title that day, surpassed $50 million in his career, at age 27, won the U S Pacing Championship with Shamballa, for his dad, defeating both Always B Miki and Wiggle It Jiggleit and Zeron won the Hambletonian final by a nose, an indication of what was brewing for Marion Marauder, who won all three Triple Crown legs in a photo.

Marion Marauder well over $3 million is the richest ever standardbred Triple Crown winner. He also finished second in the $1 Million International Trot at Yonkers.

Zeron won the freshman pacing colt division with Artspeak and last year won a pair of pacing divisional titles with Nancy Johansson — 2YOCP with Breeders Crown and Governors Cup winner Captain Crunch and the 3YOFP division with Kissin In The Sand. z