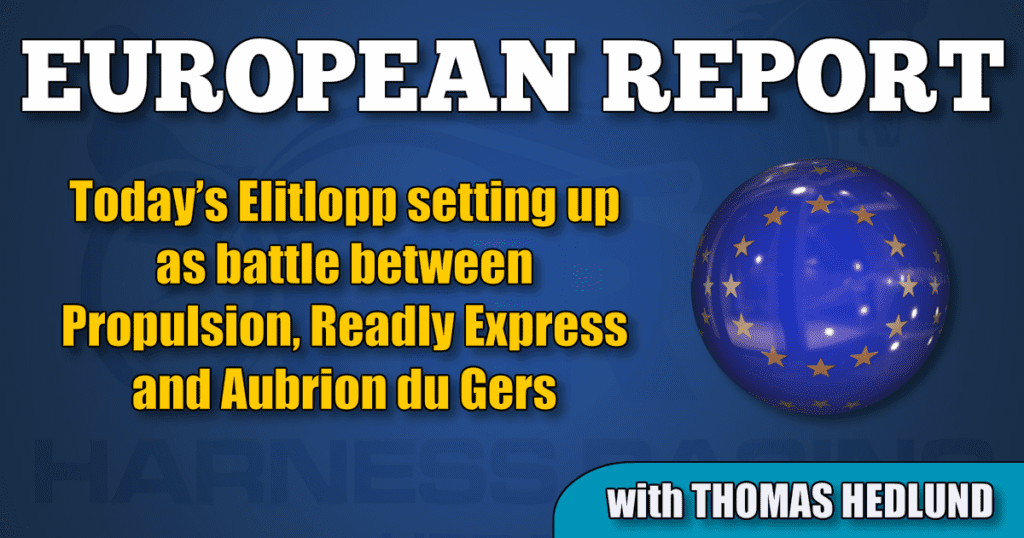 Propulsion’s Daniel Redén is the first trainer to have four horses in the Swedish classic since it began in 1952.

The Elitloppet is one of the world’s most prestigious harness races and fans all over the globe start to talk about the race as soon as the horses leave Vincennes in Paris after the Prix d’Amérique in late January every year.

So what’s the big deal this year? Solvalla has described today’s edition pretty much as a battle between Readly Express and Propulsion, but there are 14 other horses that can win the contest.

Readly Express will be the first choice in the first elimination and it’s highly likely that Timo Nurmos’ horse will solve the task he has ahead of him, where post seven seems to be the biggest issue for him.

Trainer Daniel Redén has managed to get four trotters in the 2019 Elitlopp — the first time a trainer has landed that many horses in the Swedish classic — and Double Exposure and Sorbet will both try to get a spot in the final in the same heat as Readly Express.

”I’m satisfied with them both. Double Exposure’s last month has been just something extra and I’ve said to other media that I’ve never in my career felt a horse in better condition than her. With that said, I’m excited to see what she can do among colts and geldings over the mile, because I know she’s tough. Sorbet draw bad post position and he’ll just seek a cover trip and try to reach the final, if he’s lucky,” Redén said.

The trainer has Propulsion and Heavy Sound in the second elimination.

Propulsion will contest the Elitloppet for the fourth year in a row, while Heavy Sound is new in the Elitlopp; so as his driver Kenneth Haugstad.

”Propulsion is where I want him to be right now. Olympiatravet was a tough one for him, but with this horse, I’m confident and I know that he’s in perfect shape for the moment. Heavy Sound has many skills that are valuable in a mile race like Elitloppet. His technique in the turns, his speed and his condition are all factors that will be important,” said Redén.

Jean-Michel Bazire-trained Aubrion du Gers, driven by Jos Verbeeck, will probably be the first choice in the second heat and the mystique that surrounds him is the question whether he can leave fast enough to get the lead or not from post one behind the gate. It’s said that the French trotter will race in an American bike for the first time in this heat and with a closed bridle, Verbeeck can surely send Aubrion du Gers quickly the first 150 meters.

Three eliminations which led to a final where nine trotters fought for $125,000. That was the condition when the Sweden Cup was held Saturday at Solvalla, the day before today’s Elitlopp.

Cyber Lane (Raja Mirchi) was the first choice in the first elimination and Johan Untersteiner had no problem sending his horse to the lead from post one. Cyber Lane took a wire to wire win in a moderate 1:54 mile.

Nine horses gathered around the track of Solvalla in the final and the race became considerably more spectacular than the eliminations.

Cyber Lane opened quickly from post three and got Chief Orlando on the outside while the pace was set to a mile rate of 1:51.3 the first half mile.

Chief Orlando seemed to get an advantage in the end of the last turn and driver Björn Goop had control of leader Cyber Lane in mid home stretch. But from out of nowhere, Queer Fish (Varenne) showed up far outside after a trip in fourth on the inside. With 300 meters to go, it looked like Queer Fish could reach a smaller piece of the price money. At that point, driver Ulf Eriksson still hadn’t free space to use with his horse.

And Queer Fish flew in the home stretch, he flew fast enough to disarm Chief Orlando by a head and fresh trainer Magnus Träff celebrated his biggest success at the tracks.

”We put Queer Fish in the race most for fun and we got a bad number in the elimination, so we made this trip and just wanted to enjoy the day. And now we’re here. It’s just unbelievable”, said Träff in the winner’s circle after the prestigious win in 1:52.1.

As Finland’s Ollie Koivonen turned into the home stretch with his Eelis, the Finnish national hockey team made history by beating Russia to qualify for the world championship final against Canada.

The $180,000 Harper Hanover’s Race, over approximately 1.95 miles, is one of the top races during the Elitlopp weekend at Solvalla and, as usual, the contest was an attraction for the spectators in Stockholm.

With 15 horses starting from three different distances, Timo Nurmos-trained Magic Cash hit the lead at an early stage and driver Jorma Kontio really had great trust in his horse. Kontio set too fast the pace for a three-lap race and Magic Cash was a beaten horse with a half-mile to go.

But Timo Nurmos could celebrate anyway since his Eelis (Enjoy Lavec) finished strongly after a cover trip for Koivonen.
The mile rate of 1:57.3 is just extraordinary for a horse with just lifetime earnings of approximately $70,000 before the race and Finland as a country experienced some happy minutes right at this moment.

The Elitauktion in Stockholm the days before the Elitlopp set a new record regarding the price for a yearling at this particular sale in Sweden. Top trainer Lutfi Kolgjini paid 1,525,000 Swedish crowns ($159,000) for Bottnas Ideal (Ready Cash—Aisle Stand). Aisle Stand was a star trotter herself in Stefan Melander’s stable and she won, among other races, the Breeders Crown for 3-year-olds and the Solvalla Grand Prix.

Top numbers at the ASVT auction:

The World Driving Championship started at Solvalla racetrack on Friday afternoon and Canadian title holder James MacDonald won one of the three races during the first day.

But it’s Finnish driver Mika Forss that has collected most points after two days and four races at Solvalla. Forss won the first race on Friday’s race card, MacDonald the second and Sweden’s Ulf Ohlsson the third.

One race was on the card on Saturday afternoon and Dutch driver Rick Ebbinge took a safe wire to wire win, which puts him among the five drivers in the top before the competition resume on Monday.