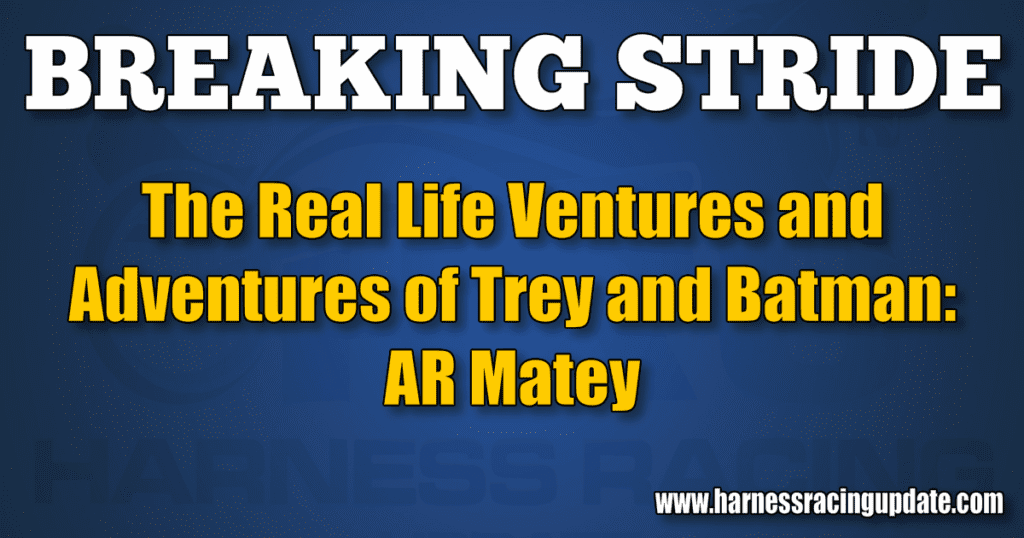 Plenty of people in this big wide world know my pal as a stoic, rich, 50ish fellow who recently left the netherworld of Silicon Valley. Each day, I realize that deep down he is just like all of us, a child filled with wonder and fears. The more we hang out together, the more his mask slips.

For example, when Batman grows excited, he waves his hands.

When he slipped into my car this morning for a trip to a dentist in Wooster, he began conducting an invisible orchestra as he set out to convince me of a weird concept — slowing down time.

Yesterday, he suggested that viewing a harness race would become an improved experience if each race was slightly delayed and that an additional minute or two would allow gamblers and fans to see races more clearly and allow more time for their brains to process all of the information. Today he gave me additional details and he went crazier.

He slowed his hands to click his seatbelt and got back to funny business, “The speed and power of a trotting horse or a pacing horse are awesome. When a champion trotter is moving at full tilt and I am standing by the rail, their legs are a blur. The speed makes processing both information and optics a challenge for our brains. As the motion slows to the eyes and the brain, the power and majesty of a racing horse are increased. I tried slowing things down in a few crude experiments and believe this to be true.”

“How slow are you suggesting?” I asked.

“Certainly not super slow motion. My thinking is that a race could be shown about halfway between real-time and traditional slow motion. I was fooling around with this last night. Frames per second is a complex area, around 60 fps is common for online streaming. The optimum speed for a harness horse race is an open question. There are many variables to consider, such as the recording device, what the receiving device can support, and how different people process information at different speeds. So, to answer your question, the speed for my idea would need to be scientifically determined.”

I cut to the chase and asked, “Do you really think people would get comfortable if they did not see the race at full speed in real time?”

He did not hesitate, “I do. It would be a simple concept to beta test. Remember, this slowed viewing is optional, long time customers need not change anything. Gambling is not changed.” Then he came back with another question, “What about you, an avid horse player of long standing, do you think you would try watching your beloved sport a tad more slowly?”

My answer seemed to encourage him because his arms were waving again, “Not only would this slight delay improve the excitement of viewing the race, the additional minute or two would open up unbelievable opportunities for AR.”

“Alpha Romeo? I can go on all morning.”

He smiled, “Augmented Reality is a technology that superimposes a computer-generated image on a user’s view of a real-world event. Augmented reality keeps the real-world focus on an event, but adds elements that aren’t really there to enhance the user’s experience.”

I wiggled an index finger, “You promised not to go all sci-fi and to stay away from gaming headsets and all that crap.”

“No, no, you’re confusing augmented reality with virtual reality.”

“You’re confusing me with Sheldon Cooper and Howard Wolowitz.”

He tried to explain in English, “In VR, everything is computer generated. In AR, content from a computer is layered over a real-world environment. AR isn’t new technology, you see it every day on television, especially in sports.”

“Explain that to me using crayons.”

“When you are watching golf and they display a line on the screen that tracks the flight of the ball — that is AR. The player hits the ball, he is real, the swing and the shot are real, but AR allows you to follow the flight, the velocity, the height, the curve, and the distance. There are many examples and types of AR. They are methods of adding digital content on top of a real-world camera view. The intent is to give the viewer an improved experience.”

Scrunching up my face, “Horseracing, I don’t know…”
He didn’t let me finish. Instead, he handed me his phone and showed me a one-minute video.

I watched the video. Then I handed his phone to him and said, “That’s very cool, but those horses were just walking onto the track.”

His hands began flapping, “Exactly, TIME is the key to this idea. An AR dashboard like the one in that video is useless DURING a harness race; there is already too much information to process in too little time. The idea is to buy more time, just a little more time.”

“He put an index finger on his temple as if shooting for a mind meld and said, “Imagine a race tonight, the race will last 1:54. During that time, the announcer will struggle to include every horse’s name. He will identify the leavers and the closers. Good announcers can weave in a few phrases like – Trying to flush out…, Grabbed cover and…, or Taking the long route…

Announcers usually do a fantastic job.”

He used his other index finger and another temple for a double mind meld, and continued, “If those announcers had four or five minutes to work with, using my idea of a slightly slower presentation, they could tell a much more compelling story. The race that viewers can now SEE more clearly would be presented with a stronger narrative.”

The mind meld was successful. I nodded and said, “And the slower race thing would allow for AR dashboards like the one in that video. You could show stuff like wind direction, wind speed, the exact distance the horse has traveled, individual times for race quarters, and…”

“Whoa, Trey.” He opened his arms wide to interrupt my blather. “Welcome to the Starship. I always knew you were a nerd at heart. You see the future; you want to be part of the new world order. You nailed my point – a slightly delayed streaming of a horse race would not negatively affect gambling; it would allow a contemporary view and enhanced experience of your old sport.”

I chuckled, “I wouldn’t’ go that far, and I for sure wouldn’t use those words, but maybe you are onto something, maybe our races shouldn’t whiz past on jumbled, boring treadmills. Consider me aboard the Starship.”