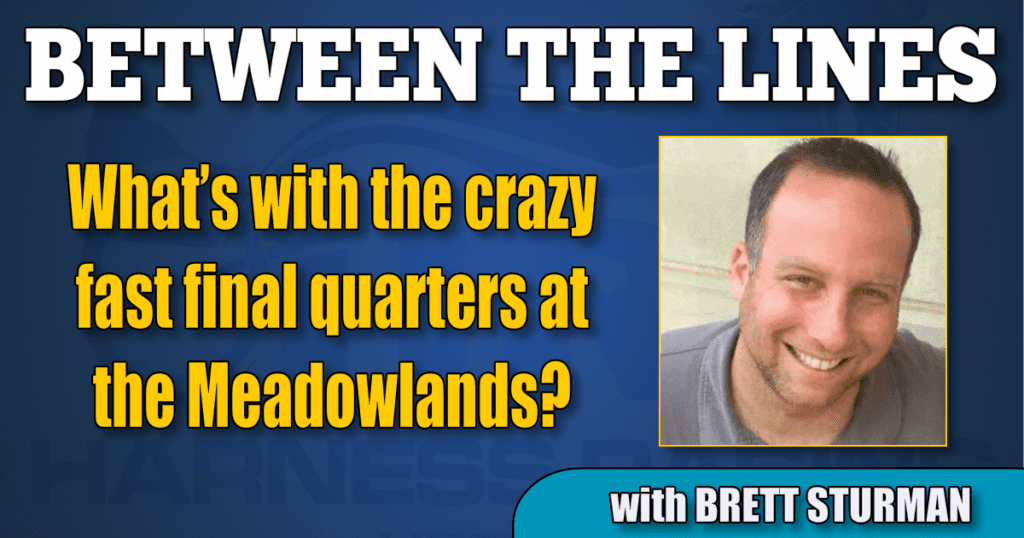 What’s with the crazy fast final quarters at the Meadowlands?

Dave Brower said changing the direction they race at the Big M appears to be a factor.

Not only does everyone close in :26 and change, but a lot of horses now routinely close in the :25 range. Two Saturdays ago, in a leg of the Golden Receiver series, in a 9-horse field, five horses closed in :25 flat, two closed in :25.1, one closed in :25.2, and one closed in a “pedestrian” :26 flat as a result of a first-over trip. But this most recent Saturday included even more crazy times, including one that is probably a record.

Meadowlands track handicapper Dave Brower relayed to me a communication initially sent by Meadowlands numbers savant ‘Hollywood’ Heyden containing statistics from Saturday night. From that card, 65 horses closed faster than :27 flat. Fourteen were faster than :26 and to Heyden’s best recollection, the final quarter from Mach N Cheese of :24.3 to run second in the 4-year-old was the fastest final quarter mile in the history of the Meadowlands. And for all anyone knows, it might be the fastest ever anywhere.

Brower has seen it all throughout his tenure at the Meadowlands and acknowledges that final quarter times have been noticeably faster than usual this meet, and he lent his theories as to what may producing the phenomenon.

“Since I’ve gone back to work at the Meadowlands at the new building, it’s much windier on that part of the stretch than it was at the old building and in general, it’s much windier. You can see it from the press box just looking at the waves in the lake in the middle of the infield – the waves are much stronger looking at the stretch side than they are on the side of the track in the first turn. It’s just the nature of racing on this side of the track versus the old way. And this year, we’ve just had a lot of windy nights in the winter and heading into the spring – it’s almost kind of the norm.”

In addition to the wind-aided stretch drive, the final fractional times are also attributed to races with slow early paces. Naturally, a race with a slower pace will produce faster final quarter times than would a race where they go to the half in :53.4. In two feature races from last Saturday at the Meadowlands, the early pace was spectacularly slow. The Graduate trot division featuring world champion Six Pack went to the half in 58 seconds, while the 4-year-old preferred pace went to the half in :56. The combination of top horses and slow paces is potent for producing the :25 final quarters that now seem commonplace.

“In some of the races where if there is no contested pace – these horses are all pretty good – they’re going to motor home; especially the upper level ones,” said Brower. “The pace has been (largely uncontested) for the upper level conditions and the stakes races, but we’ve had a lot of good battles in some of mid-to-lower level conditions and claimers. They race a little bit harder in those, and it’s just worked out in the past couple of weeks that Six Pack is allowed to cruise on the lead and Gold Orchid N a couple of weeks ago – these are high powered animals and of course they’re going to come home – they’re supposed to come home in :25 and change or :26 flat. So, to me, that’s expected and not of the ordinary.”

While the most exceptionally fast final quarter times have been reserved for the upper classes, the N/W-2 on Saturday had final quarters ranging from :25.3 to :26.2 for everyone horse except one, who paced in :27. Brower was accurate to note that this N/W-2 field contained at least four legitimate stakes horses and this wasn’t your typical bottom level field, but with that said it seems that you still need to be able to pace a final quarter of :26 in many of these races to be competitive.

The quick final times are reminiscent to a few years back when some people felt that the track at Pocono Downs had to be short of a full mile after world records fell almost daily at the track. Though as documented in this HRU column from 2013, the track measured an exact five-eighths of a mile when measured in 2010. Though not many this time are suggesting the Meadowlands is anything other than a full mile, it calls into question how you handicap knowing that all horses can close with super-fast final quarters. Do you disregard them, the same way you may disregard a fast time at Pocono?

“I don’t put as much strength into them (final quarters) and I make it more of a visual thing,” Brower said. “When I’m watching a race, if a race has no pace to it, I will write that down on my program page and make note of it so that I know right away that if anyone was trying to close was at an extreme disadvantage. If you see somebody shooting up the inside and making up good ground while they’re sprinting ahead of him, that’s an extra special effort and you remember for that next week. I’ve never really let the time affect me being a mile track guy – it’s more visual for me. You know when you see a horse racing really well from an impossible spot – you know what you’re looking at.”