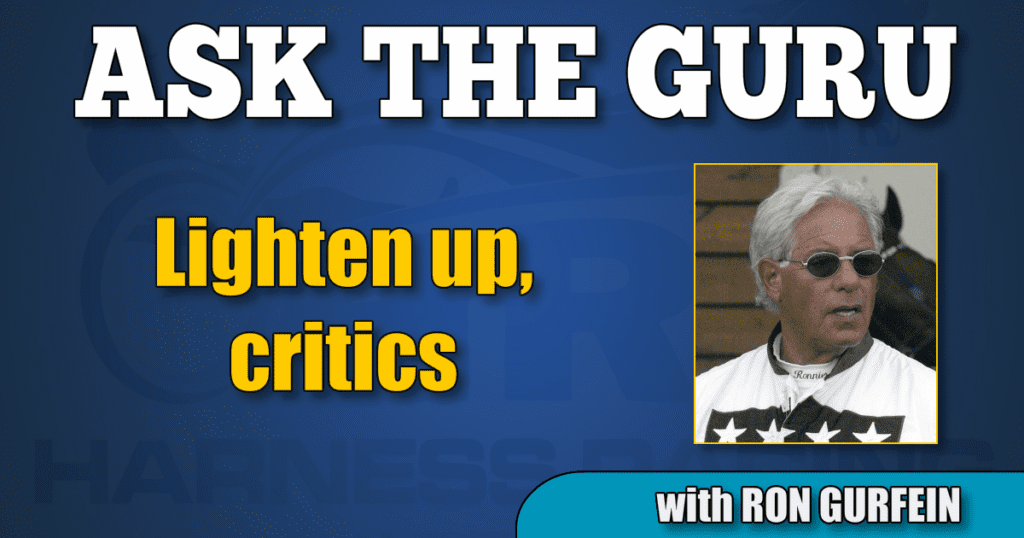 Plus, my choice for the best babies by sex and gait, how to stop a trotter from hitting a hock and more.

Tidbits: It’s time all my followers lighten up a bit. From this day forth please accept my column as a historical novel. Enjoy it for the story and humorous content, and please stop over reacting to my onset of senility. Ninety-nine per cent of your feedback is positive but the one per cent is sooooooo terribly nitpicking it’s makes me wonder what some of these people do with their time. If I do something horribly wrong I deserve the wrath, but the few simple mistakes I make hurt no one, nor do they really affect the totality of my articles. To those of you that have be so critical remember “may he who has not sinned, cast the first stone.”

How amazing is the barn of Marcus Melander. His 3-year-old trotters are rated 1, 2 and 3 in my Road To the Hambletonian. I had some very precocious 3-year-olds in my time, but few could compare to what is in his shedrow today. There were two occasions in my entire career that I put a colt on the track and thought he could break the 1:50 barrier. Mike Lachance thought Self Possessed on Hambletonian Day 1999 could have done it if there was a horse that could push him, but that didn’t happen as he drew off by five under wraps and I thought when we got to the Red Mile it would be possible in the Kentucky Futurity. That thought fell apart quickly when the weather was windy with temperatures in the mid 30’s.

On the other hand, it looks to this writer that Melander has at least three with that kind of ability. Greenshoe, after his romp in 1:51.2 in the NJSS looks like he could crack the barrier without the aid of positive conditions. The colt was nothing short of sensational. Also looking great was last year’s undefeated 2-year-old champ Gimpanzee in a Meadowlands qualifier headed by Hannelore Hanover in 1:53. Green Manalishi completes the trio of this speedy crew. He has tremendous ability himself.

It will be interesting to follow the Road to the Hambletonian that I write for HRU and the Meadowlands selections and comments by Ken Warkentin. This week we start out similarly, but Warkentin has four horses listed that I don’t mention at all. I am not saying he is wrong because that would be fools play. Just pointing out our different opinions and we can see how they play out. Note that four of my top 10 selections are in the second qualifier at the Meadowlands on Saturday evening at 5:30 p.m.

Congratulations to team Burke for a giant win in the Confederation Cup Sunday at Flamboro, well done with Done Well (sorry that wasn’t bright). Also kudos go out to team Moreau, the performance of Jimmy Freight was just as impressive. I really don’t understand the race chart that shows he did not close on the winner. To my eye he was flying late after being at least two lengths back.

Please remember the Graduate series provides the opportunity to 4-year-olds to compete against horses their own age. I hear chatter on social media about some of these young stars stepping up with the FFA stars. BE CAREFUL WHAT YOU WISH FOR. The transition to racing older horses is far more difficult. Don’t be in any hurry to come up against the likes of McWicked, he is a formidable beast and no easy task for any 4-year-old to conquer. It was not so long ago that the great Captaintreacherous was forced to race older horses because of the “Gural Rule.”

Believe me, that wasn’t pretty. The only race he won as a 4-year-old against older horses was a preferred pace for $31,000 at Mohawk. Remember, he was one of the greatest 3-year-olds in history.

It’s tough for the Trotting Guru to say but it looks like the 3-year-old pacing division is just as loaded and equally as exciting as its trotting counterpart… As I write this, trotter (Greenshoe) stands alone at the top of the heap. This may certainly change and most likely will, but the amount of pacing talent I have witnessed in the recent weeks is nothing short of amazing.

One thing is certain, Captaintreacherous is a fabulous sire. I don’t want to hear I am pandering to the Alagna group because it seems that some of the less expensive ones are going to the top of the class.

Captain Crunch (Nancy Johansson) and Workin On A Mystery (Brian Brown) cost $85,000 and $30,000 as yearlings, respectively. They were more than spectacular winning their individual divisions of sire stakes at The Downs in Pocono on Sunday. Two sub-1:50 performances in conditions truly not suitable to that feat.

Can you name the 2019 Kentucky Derby winner? It’s only been three weeks! Get my point! Trust me when you remember it may be the last time you hear his name.

Now that Game of Thrones is finished (a series I couldn’t force myself to watch) try to binge watch The Fix. It too is over, but you can see it on demand and I think it is well worth watching. It aired on ABC.

William Anderson asks: Now that you have seen the Preakness result, do you think the Wests made a mistake by not racing their DQ’d winner Maximum Security back in the event?

Absolutely not. The Triple Crown races are bunched together, which creates an inordinately short period of time for the three events. It becomes a test of soundness and endurance as much as speed. Maximum Security could no longer have won the Triple Crown and he is obviously a truly talented colt. Why risk an unnecessary start back in two weeks that is not in the best long-term interest of the horse. He will have a myriad of big races available in due time in his future. If you look at the overall weakness of the Preakness field, the only viable horses racing back after a start in the Derby were War of Will who’s connections had a point to prove, and Improbable, probably Bob Baffert least formidable colt of his three Derby starters. My opinion of the group is that none, including the aforementioned duo, will be a threat in the Belmont, the Travers or the Breeders Cup… I would like to add that although I was terribly disappointed by the stewards decision and sympathize with the plight of the connections of the winning then, disqualified colt, I am truly dismayed at their classless reaction to the situation. I agree with the lawsuit, but the additional discourse was definitely unnecessary. Money challenges are sour grapes and have no business in any sport.

Bill Bigler asks: Simple question. You promised to give us your choices by sex and gait from your observations this winter. Would you please do this before the baby races begin.

William, I will do it now….

Best pacing filly: REFLECT WITH ME

Their results of this most likely fruitless endeavor will be published sometime in December when you have little else or read about.

Dalton Walls asks: Any tips for a trotter hitting a hock?

I think this is one of the easiest problems to cure. It is not as unusual as you would think and most do it so slightly that often it’s is difficult to notice. However it is a very sensitive area and alleviating the problem is a necessity.

The simplest answer is to lighten him up in front and shorten his toe, but this might affect him his ability to trot. If it doesn’t work lower both hind feet to the outside and take his head up one or two holes and use brace bandages instead of boots. If resolution still not achieved raise his angle behind to approximately 58 degrees and put a queens plate on him. I am quite sure that if you follow some of these simple tasks your colt will no longer brush his hocks.

I find the perfect shoe to clean up a trotter’s gait is an aluminum combo shoe. Unfortunately, not so readily available at this moment. I know they are available in Florida and Kentucky. In Florida at Visbys Products on 441 in Wellington or in Kentucky at Stockhoffs in Lexington and, they have an online store. To buy online from them select therapeutic aluminum shoes, they are under JB Combo Bar Shoe.

Thanks to my readers for your encouragement and kind words and please keep your questions coming in. Have a wonderful holiday.