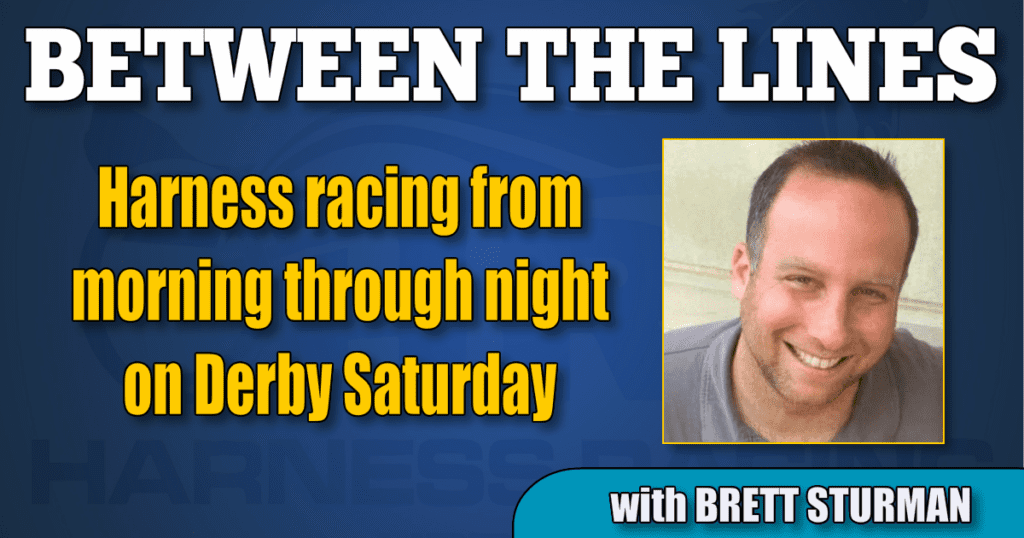 Harness racing from morning through night on Derby Saturday

Every year in the week leading up to the Kentucky Derby, I hear from friends I haven’t heard from since the last Kentucky Derby, asking who I like in the race. For them and most people, the Kentucky Derby represents one of the only days of the year to bet on horses. For us harness racing enthusiasts though, the benefit of Derby day is that tracks begin earlier than usual to coincide with the early Churchill start time. With added cards and special post times on Saturday beginning as early as 11 a.m. in the East, the day offers over 12 hours of continuous harness racing with a series of top-notch stakes races mixed in. Here’s a timeline of what to watch throughout that time.

Pocono Downs kicks off its doubleheader card with 10 races beginning at a late morning time as the first harness track to begin the day. All 10 races are lower level conditioned races, but it’ll be enough to get started until some of the higher-level caliber of racing joins in.

The Meadows begins their card and is highlighted by 3 PASS divisions for 3-year-old pacers, each going for over $58,000. Race 3 at 12:05pm is the first of the PASS races, and it features last year’s Breeders Crown runner-up PROOF. David Miller is at the track for a day of stakes races and he’ll get the drive for Brian Brown. PRINCE OF TIDES didn’t make waves in his four starts last year at two, but he’s unbeaten in three starts this year throughout the Wiggle It Jiggleit series at the Meadowlands, most recently winning in 1:49:4. The following PASS race immediately after at 12:25pm showcases the return fast 2-year-olds last year, AIR FORCE HANOVER and WORKIN ON A MYSTERY. Both are Brian Brown trainees, and the latter took a mark last year of 1:49:2.

There are two Great Northeast Series races at Harrah’s Philadelphia in the afternoon, but it’s the second one that should draw all the attention. The open F&M pace features the return of last year’s 3-year-old pacing champion KISSIN IN THE SAND following a couple big return qualifiers over foes such as Caviart Ally and Youaremycandygirl. Believe it or not, KISSIN IN THE SAND actually rates third in the morning line. I guess the thinking is that maybe she won’t be A-1 ready at first asking? DON’T THINK TWICE A lands morning line favoritism after racing in the Matchmaker at Yonkers and TEQUILLA MONDAY is another short-priced mare in the program. She was a pretty good filly in her own right at age 3 and if there was ever a time she could beat Kissin In The Sand, maybe now would be it – still not likely though.

The Lady Suffolk at Freehold is the first of two major stakes at the track, and the favorite is likely to be MAGIC BELIEFS. Going for Linda Toscano, this one made good money last year at two in stakes such as the Liberty Bell and Keystone Classic, but I’ll take a shot against. GOLDEN TRICKS lands the big post edge for Ake Svanstedt and I’d expect him to be very aggressive in this spot. She raced well at times last year against some of the division’s better ones and that qualifier against French Café was solid.

This is the $118,950 Dexter Cup at Freehold and though it hasn’t produced a lot of Hambletonian starters in recent years, it has launched some eventual nice horses and it’s one of the first open stakes of the year for the 3-year-old colt trotters. OSTERC is likely to be the heavy favorite. Though he makes his first start of the year, he qualified most recently against a fast pacer by Well Said at Freehold and his qualifying time from that morning seems to be about 20 lengths quicker than anyone else. Smedshammer’s horse SKYWAY KON MAN would rate more of a chance if not for post 8.

The first of two $50,000 divisions of the Graduate series at the Meadowlands for aged pacers includes the return of familiar stakes players from last year. THIS IS THE PLAN did all he could last week in what primarily used as a prep race for tonight, and he was excellent last year when moving to Burke. What are we supposed to do with LATHER UP tonight? The fast, but often erratic, horse qualified back three times, and made a break in his most recent one coming at the Meadowlands – I think you have to let him win if he can. DORSODURO HANOVER went a giant mile here last year when second in the Meadowlands Pace; divisional champion had bad posts in both return qualifiers.

The largest purse of the day is in this race, the $175,200 Cutler FFA for open trotters. As usual with these 12-horse fields at the added distance, the race is wide open. CRUZADO DELA NOCHE hasn’t yet been able to replicate that performance in the Yonkers International and similar to Lather Up, I’d be willing to let him beat me if he can. PINKMAN won last out and has already equaled his win total from last year; have to give him credit for getting all the way back to the top. My horse in here to take a shot with is GUARDIAN ANGEL As for Lorentzon and Tim Tetrick, he went a number of fast miles last year and I think is better than he gets credit for; could be a force this year. FIFTYDALLARBILL almost always fires and should be respected; brings with him fellow Tetrick, Trace.

The highlight of the back half of Pocono’s doubleheader is the $50,000 Van Rose Memorial Invitational. In the race, WESTERN FAME makes his first start following his Levy triumph and it doesn’t seem like post 7 should present too much of an issue for Team Allard. HIGHALATOR comes off a sharp front-end score against open company at the Meadowlands last out and he has a good history at Pocono; owns a ton of early speed.

In the last big race of the day, Meadowlands Pace winner Courtly Choice makes his 4-year-old debut. He returns off a couple of dominant qualifiers at Mohawk Park and likely will be rallying from off the pace. DONE WELL qualified in 1:50:4 which represents a career speed mark for him. AMERICAN HISTORY went in 1:47 here last year but wasn’t as strong as #4 in that recent qualifier. ALWAYS A PRINCE was a killer last year in Indiana but he also beat horses who competed on the Grand Circuit; I wouldn’t be too quick to disregard. THINKBIG DREAMBIG put it all together in the second of the year last year; another that probably will be coming from off the pace in first start back.