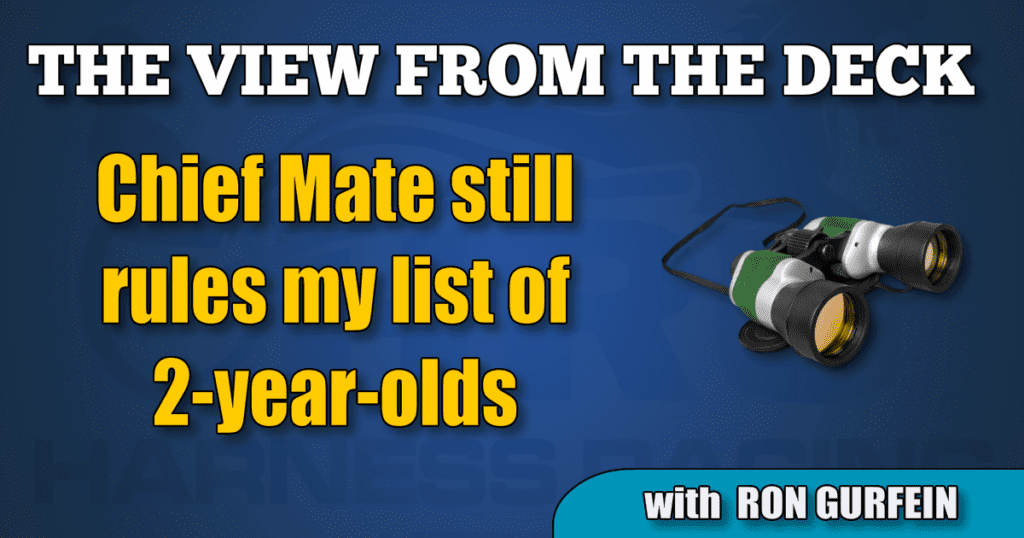 A final major training session this week at Sunshine Meadows confirmed what I already believed — that Chief Mate is the toast of the class.

(Editor’s note: Ask the Guru will return next week)

My Sunday version of View from The Deck was conspicuously missing because whatever big guns were left in Florida had decided, because of the constant rains, to put off training till this week.

It was worth the wait. Lots of future champions were on parade. Although there were many to love I leave you with one horse that remains at the top of my list after all is said and done.

Chief Mate (c Captaintreacherous—Heaven Forbid) is my pick of the season. He trained his final mile in 2:04 with Tony Alagna once more in the bike. He was followed very closely by Its Showtime (c Captaintreacherous—Uffizi Hanover) and Ideal Perception (c American Ideal—Southwind Siren). Another fast pair of colts also in 2:04 were Choir Master (Mach Three—Ideal Helen) and Captain Barbossa (Captaintreacherous—Swinging Beauty).

Rollinthejoe (c Roll With Joe—Sweet Bonnie), and Force N Fury (c Captaintreacherous—My Little Dragon) (another colt I love) stopped my watch in 2:05 last half in 1:00.

I also spotted some trotting performances of note. Donna Fugata a 3-year old Kadabra homebred owned by HRU columnist Vickie Howard, was trained in 2:01 by Tony all by herself and the top 2-year-old trotter in the barn Confidante (f Father Patrick—Anywhere With You) was timed in 2:05.

From Fred Grant a wonderful pair Test Match (f Andover Hall—Widdershins) and the pride of Walnut Hall, Oxford Hall (c EL Titan—On With The Show) went a good mile in 2:13.

Although Rick and Scott have headed north, Team Zeron showed off a great filly this week, the $120,000 Muscle Hill—Emmylou Who lass named Solsbury Hill that went a mile in 2:20 but came the last quarter in 29 seconds for fun.
Lindy Farms, with Domenico Cecere training, closed out the season in fine fashion.

Union Forces and the much improved Refi were timed in 2:00.4. Signor Cardin charged home in 1:59.2 and the quickest of the 3-year-olds was Throw Out The Tab and Magic Joe Lindy in 1:58.3. The former an unrated son of Cantab Hall from Victory Treasure.

Moms Millionaire’s filly, as yet unnamed, by the great Muscle Hill, looked awesome stopping the clock in 2:10 last half in 1:02 followed by Do No Lindy (c Donato Hanover—Lindy Land).

The Harrisburg yearlings have almost caught up to the Lexington colts and homebreds and some looked very special in the Lindy Barn.

Prefect Hanover (c Father Patrick from the fabulous Passionate Glide) looked like a rocket finishing a mile in 2:17 and She Does Trix (f Trixton—La Riviera Lindy) looked good in 2:19.

Thanks to all the trainers at Sunshine Meadow for being so kind as to answer my annoying questions throughout the entire winter. You were all quite helpful. In closing another winter at Sunshine Meadows, I wish all the connections a very successful 2019, and hope to see you all again next year.

In the Ask the Guru segments I have been asked to list my selection for the top four horses by gait TF, PF, TC, PC, and I will answer that letter sometime before the baby races commence.

The draw for post positions in the Kentucky Derby is too close to my deadline to publish my Derby selections, which hopefully will appear Sunday. If for some reason there is a major change i.e.: my selection drawing post 20, I will update my selections in next Friday’s Ask The Guru segment.

Thanks for reading this column. I sincerely hope you enjoy it as much as I like writing it. Have a wonderful week.