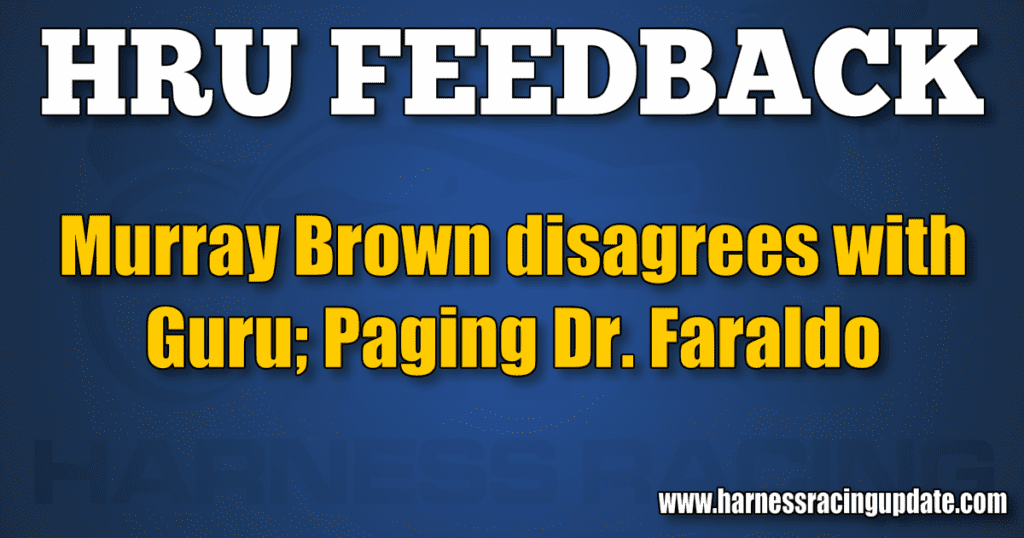 Murray Brown: I totally disagree with The Guru on heat racing

I totally disagree with what I perceived as my good friend Ronnie Gurfein’s conclusion in his Friday column regarding heat racing (full story here).

Obviously, our horses are sturdier, probably a lot sturdier than those of our TB cousins. Nevertheless, in my strongly held opinion, no horses of today’s era should be expected to go multiple heats on the same day, especially in the hot conditions as usually prevail in the Hambletonian and sometimes also in the Jug and Futurity.

Just check out the list of the horses who have won and participated in those races. Some have survived. Yet a disproportionate number have never been the same after going heats. If the number were ONE of those horses, it would be ONE too many.

Yes, our horses were once bred and TRAINED to go heats.

However, that was before they were asked to go the incredible speed fractions that they are expected to go with as Mr. Simpson would say the “catchup” drivers of today.

I don’t necessarily blame the drivers. They are doing their jobs. They do them exceptionally well.

Ronnie knows more than I do, that generally speaking a horse is a creature of habit. When you change their habits and the physical demands placed on them, you will sometimes get unwanted results.

We don’t have too many Baldwins, Simpsons, Ervins, Beissingers, Pownalls, Dancers and yes Gurfeins training these horses today. They are with very few exceptions not prepared to endure heat racing. For lack of a better term, it’s inhumane.

If we continue doing it, it might not be our decision to make to cease doing so.

It may be decided for us, with consequences that are totally unexpected including the forced cessation of all horse racing.

Is it unlikely to happen? Yes.

Is it impossible? Absolutely not.

I hope everybody had and is having a wonderful Easter and Passover holiday.

I feel so relieved to finally understand the effects and side effects of Furosemide now that Dr. Faraldo has clarified to the racing world in his letter to HRU (2019-04-07 Feedback), that the drug is safe and should not be blamed for any mishaps that have or will occur. I was quite worried when I read about countless experts, some with multiple degrees in medicine, warning the world about the usage and subsequent danger of Lasix, but Dr. Faraldo has shed a new and informative light on the situation and I can now sleep soundly, as these world renowned Nobel Award nominated scientists are wrong about Furosemide. Shame on the rest of the world, who believed these so called experts and abolished its use. I must admit however, that I questioned the use of Lasix on race day, as North America is the only continent still allowing its use. I also questioned its use when I found out that the racing in these countries that banned Lasix are now flourishing, as attendance and wagering are improving, catastrophic breakdowns have declined and the length of a racehorse’s career has increased. However, as Dr. Faraldo so eloquently wrote, those countries beliefs and practices regarding the use of Lasix contradict ours and thereby “threaten our existence”. Therefore, I will attach myself to the beliefs of Dr. Faraldo and support its use. It is refreshing to know that Dr. Faraldo’s medical degree has been put to good use, as there is nothing more important than the welfare of our horses. His expert medical opinion has debunked countless warnings regarding the use of Lasix in racehorses and I for one applaud his efforts.