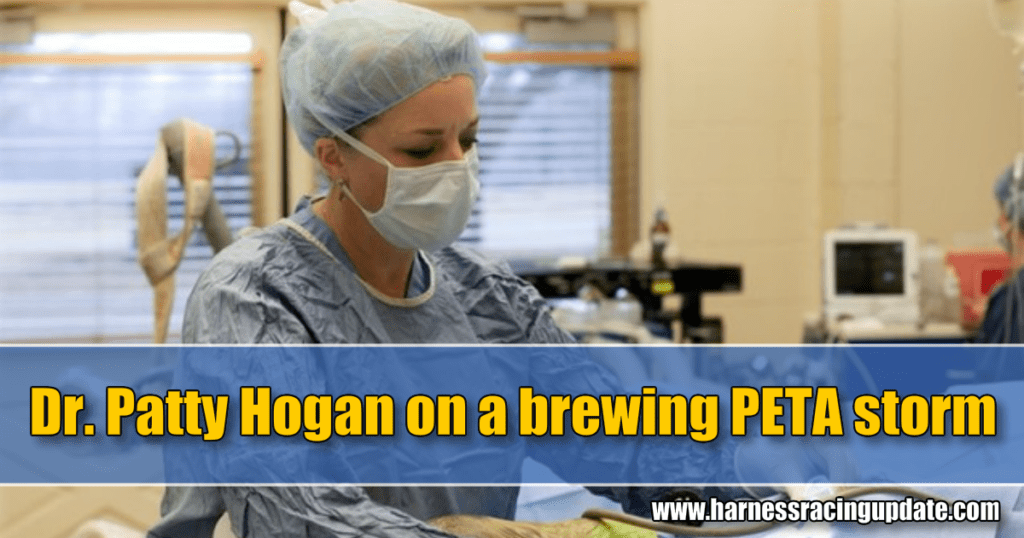 There’s very little that Dr. Patty Hogan doesn’t know when it comes to the equine athlete, harness and thoroughbred racing, as well as the groups that have been attacking the thoroughbred game since the rash of breakdowns at Santa Anita led to a crisis in California. The situation has been so dire there that some fear the end result will be a ban of the sport.

The renowned equine surgeon is heavily involved with both breeds and has often sat across the table from members of the People for Ethical Treatment of Animals (PETA) and other animal rights groups. And she is certain that any efforts to bring down thoroughbred racing in California or elsewhere will include harness racing.

“That racing could be banned in California is a legitimate fear,” she said. “If they were to ever ban racing in California, I definitely think it would include Cal Expo. They just have an agenda and so this is a convenient way for them to convince the public, who knows so little about racing, that this is what needs to happen. I think that they’re painting all of racing with a broad brush and harness racing would be under that same brush.”

Beginning with the opening of the current Santa Anita meet on Dec. 26, 23 horses have been euthanized after breaking down during races or while training in the mornings. Though there have been no fatalities there since March 31, the damage has been done. The stories were carried prominently by the media in the Los Angeles area and Congresswoman Judy Chu, who represents the district where Santa Anita is located, called for a congressional committee to investigate the treatment of racehorses at racetracks throughout the country. California Senator Diane Feinstein called for Santa Anita to shut down until track management could come up with concrete reasons why so many horses had been breaking down and solutions for how to fix the problem. The Los Angeles County District Attorneys’ office has launched an investigation into the deaths.

The biggest threat, however, may come from PETA. In California, a state with 39 million residents, an initiative can make it on to a statewide ballot if a group can collect about 620,000 signatures. If PETA were to push for it, acquiring some 600,000 signatures on a petition to put a vote to ban horse racing on the ballot would be easy to accomplish.

Quinnipiac University recently conducted a poll that showed just 19 per cent of California voters had a “favorable opinion” of horse racing, while 20 per cent had an unfavorable opinion of the sport. Fifty-nine percent had no opinion.

In 2008, a group called Grey2K led a fight against dog racing in Massachusetts and managed to get an initiative on the ballot to ban the sport. It passed by a 56-43 margin. That started a domino effect. Once a recent ban on greyhound racing voted on by Florida voters goes into effect, only five states will still have legal dog racing.

Obviously, harness racing is a much safer sport than thoroughbred racing is. They are a sturdier horse than the thoroughbred and their gaits, whether trotting or pacing, do not put as much stress on the animal as galloping does.

“There’s definitely a genetic/breed difference in the way they’re built, the size of their cannon bone, just things like that, which we know to be different,” Hogan said. “That includes the size of their feet. They are a physically different breed.”

According to the Jockey Club, 1.68 out of every 1,000 starters in a thoroughbred race died in 2018. To see a standardbred break down on the racetrack is extremely rare.

Common sense might tell you that harness and thoroughbred racing should be viewed completely differently when it comes to animal rights issues, but Hogan said people outside of the racing industries fail to see it that way.

“I don’t think (animal rights activists) understand the difference between the breeds,” she said. “But I also think it doesn’t matter because with the animal welfare advocates currently involved in the situation, they already have the end in sight that they want. It’s convenient opportunity right now that it’s come up (due to the Santa Anita breakdowns).”

Hogan said she started her dialogue with animal rights activists two decades ago over the horse slaughter issue. She has seen how much more inclined society as a whole has come to demand that animals are not mistreated and she believes than many animal rights groups, even if there were no such things as breakdowns, believe horse racing is cruel.

“I thought about this ‘big picture’ almost 20 years ago when I was involved heavily in the equine slaughter issue, that the animal welfare issues were becoming huge,” she said. “And it doesn’t matter if it’s the break down injury rate or it’s the whipping or the slaughter issue, people really care about animals to an incredible degree now. To the animal rights activists, it’s just the whole aspect of horses being confined, being whipped, being made to do something that these people feel is not natural. That’s basically it, the same way they felt about greyhound racing. They feel it’s just using an animal for a monetary reason and that they’re not allowed to live in what we all consider to be a natural environment, so I think that’s the basics of their argument. I don’t think (the Santa Anita breakdowns are) the real issue. I think it’s an opportunity right now for the people that have long said they wanted to get rid of racing.”

“Definitely. Why would it be any different?” she said.