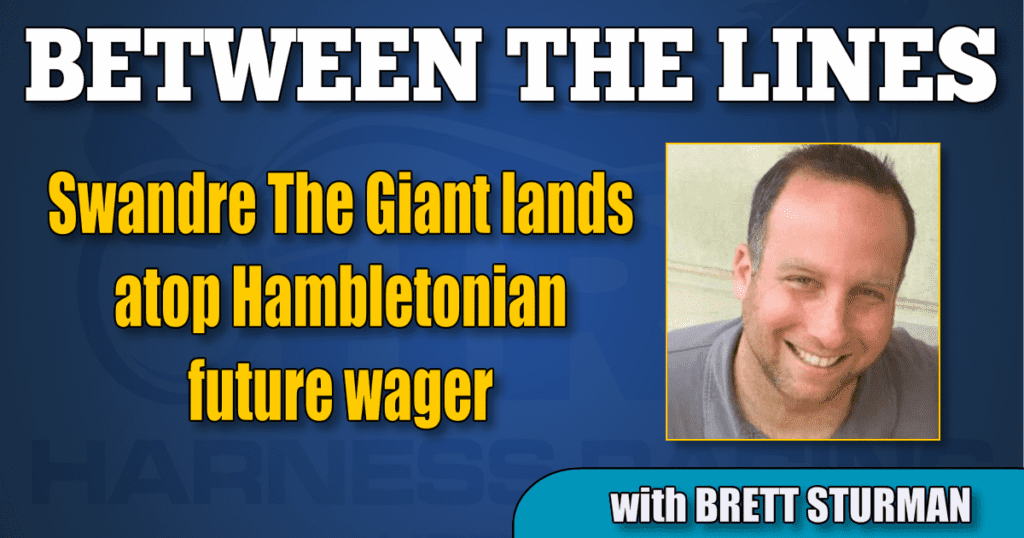 In harness racing, small wagering pools will often produce wacky looking odds. This phenomenon is on full display in the first future wager pool for this year’s Hambletonian, where, with a bet of a few hundred dollars, Swandre The Giant has been made the early race favorite. The early future wager closed with a total pool of just over $1,800, and the money on Swandre The Giant is either the smartest money ever seen, or an opportunity to cash for massively inflated values on other seemingly more logical Hambletonian contenders.

Pegged at an initial line of 12-1, Swandre The Giant closed at 2-1 which was slightly better than the currently unbeaten 2-year-old champion Gimpanzee trained by Marcus Melander, who closed at 5-2. In addition to Gimpanzee, there’s big double-digit prices on other contenders from Melander’s barn including Breeders Crown runner-up Green Manalishi S who is at 18-1, and the fast, but erratic, Greenshoe who stands at 19-1.

Not to be misunderstood, Swandre The Giant could win the Hambletonian. But at the same time, what he’ll look like when he returns to the races is a giant uncertainty.

To refresh, the Indiana-bred Swandre The Giant (Swan For All) began his career last year going seven for seven, easily beating his overmatched Indiana Sire Stake foes and establishing a 1:54:2 mark in that process early in the season. Trained and driven by Brandon Bates, he was then sold for upwards of $1 million to an ownership group that includes Diamond Creek Racing, Jerry Silva and Howard Taylor. The horse was turned over to Jimmy Takter for training responsibilities.

Following that sale, Swandre The Giant didn’t move forward despite the move to Takter and the addition of driver Yannick Gingras. If anything, you could argue that he regressed after having broken stride for the first time in the Wellwood, and then being all-out when finishing second in the $220,000 Indiana Sires Stakes Super Final back at Hoosier Park.

For Howard Taylor who owns a minority interest in Swandre The Giant, this scenario has a familiar feel to it. It was this exact time last year when Taylor had a stake in another high-priced colt that up until that point didn’t look anywhere near being able to deliver on his lofty price tag.

“With Tactical Landing, I was not that worried about him, I just thought he’ll get it,” said Taylor. “Because I saw the brilliant speed he had as a 2-year-old in between the breaks that I knew he had in him. I thought he was just a big dumb kid that when he grew up and grew into himself that he would be that good. Tactical Landing I was confident in, but at the same time there was a lot of pressure because everybody said we’re idiots for paying that kind of money for a yearling. I and others took a lot of criticism. And it wasn’t really the kind of horse that I would normally buy into, nor was this one (Swandre The Giant).”

Of course, in addition to Tactical Landing, Taylor was also part owner of last year’s Hambletonian winning filly and subsequent Trotter of the Year, Atlanta.

“With Atlanta, it was different because I didn’t see her coming. It was funny because she was a good 2-year-old but she was probably only about the fourth best. There were three clearly better than her as a 2-year-old and then she really blossomed as a 3-year-old.”

Taylor doesn’t have a future wager on Swandre The Giant just yet, and in all likelihood the horse will offer higher value odds in later future pools. Plus, it wouldn’t make sense to take Swandre The Giant at 2-1 when last year Taylor was able to get both Tactical Landing and Atlanta for the same 2-1 price as part of the field entry.

Atlanta will be trained this year by Ron Burke, as will Swandre The Giant.

According to Taylor, Burke is ecstatic about what he’s seen thus far in his new pupil, Swandre The Giant. “He’s been training like a killer,” said Taylor of what’s been communicated to him. “In fact, Ronnie had to shut him down (temporarily) because he trained so fast that he’s ready to qualify, but you don’t want to qualify this early.”

With the plan to qualify Swandre The Giant in May, since there isn’t anything that he’ll be racing in until at least that time, Burke backed off with the horse to give him a couple weeks off before resuming the schedule. “(Burke) says ‘this is the horse you thought he was when you bought him,’” said Taylor.

To this day, it remains somewhat of an unknown as to why Swandre The Giant didn’t fire as expected in the latter part of his freshman campaign. Whatever it was, all indications are that the Swandre of old is back and Burke has high hopes for him. In fact, Burke who is still seeking his first Hambletonian win though having a couple of tough beats in the elusive race, responded on Twitter recently to the first Hambletonian future wager odds with simply, #Swandre.

Whey Taylor bought into Swandre The Giant he was told that the horse was going to win the Hambletonian. The early road may have been less than ideal towards that eventual goal, but last year’s history has taught us a lot can change between now and the first Saturday in August.