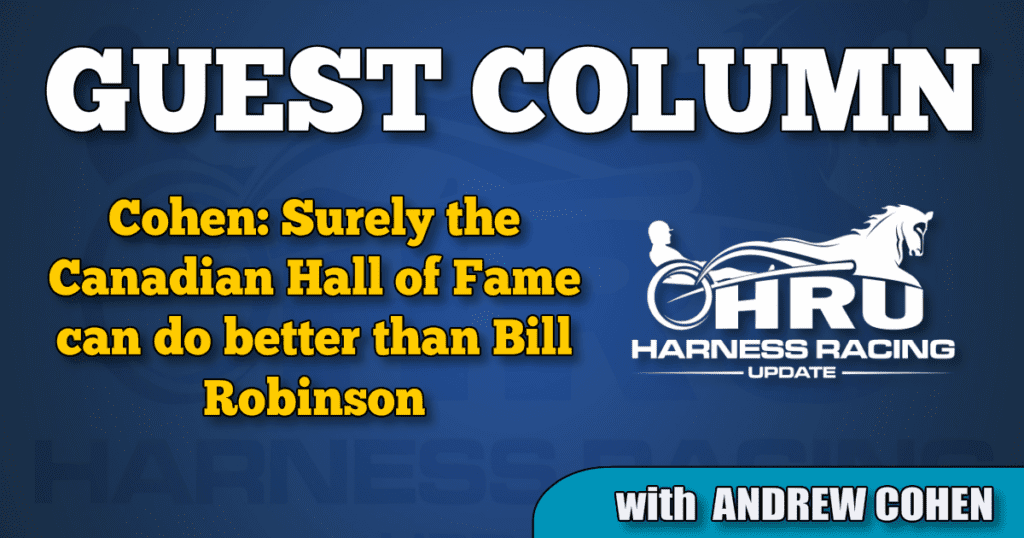 This year, I nominated someone to the Canadian Horse Racing Hall of Fame. He didn’t make the short list. I won’t mention his name, because I plan to nominate him again, but I will say that I was proud to nominate him and thought him worthy of recognition within our industry even though he wasn’t a perfect candidate or a perfect man. I knew his nomination would not be a slam-dunk. It shouldn’t be easy to get into the Hall of Fame. It should be reserved not just for men and women who have excelled on the track but for those with the sort of character we’d want our children to emulate.

Then I learned a few days ago that notorious trainer Bill Robinson did make it onto the final ballot for consideration. My first thought on seeing his name was that everything Ontario has done over the past few years to try to promote racing integrity, all of the statements about rooting out the cheaters among us, all of the rule changes, will be measurably undermined if the industry turns around and honors this man from among so many worthy candidates. Every message to drivers and trainers and owners about accountability and responsibility will be revealed to be a crock.

What do you think the headlines will look like in mainstream media if Robinson makes it into the Hall of Fame? Robinson’s rap sheet in our sport is epic. The HRU archives offer these basic notes: He was banned by the Woodbine Entertainment Group (WEG) in November 2003 after one of his horses showed an illegal TC02 reading. In December 2003, WEG suspended him for five years with a $100,000 penalty — he later agreed to a 27-month suspension and paid a $125,000 fine. He turned his stable over to one of his sons, Brett, who was suspended for 10 years in 2007. In 2015, a few months after he returned from “retirement” Bill Robinson was hit with another positive.

There is more to his story, about shadow trainers and the like, and many of you reading this know those details better than I do. In 2004, for example, Hugh Mitchell, then vice-president of racing for WEG, testified in a hearing on the matter, “that Robinson was banned because of ‘his history of misconduct (nine or 10 positive tests in 30 years) his contempt for the rules of racing, the fact that at the time of the decision, he had two pending actions before the ORC or the courts and a lack of willingness on his part to deal with the ORC in a timely fashion.’” Just think how much money earnest owners and trainers and drivers lost as a result of all of this.

It comes down to a few simple questions: Is this really someone the world of horse racing wants to highlight and honor? Is this the lesson we want to teach young participants in our sport? You can have this remarkable record of major infractions and so long as you train winning horses, you’ll get celebrated? Who nominated Robinson again this year? On what grounds? That Robinson is a serial victim, the most persecuted trainer in our history, and that men like Hugh Mitchell got it all wrong? Sure, there are others in the Hall whose integrity we can question. Does that make it right to add another?

David Anderson, a prominent owner and breeder with deep Canadian roots, whose father, Bob, was inducted posthumously into the Hall of Fame a few years ago, was like so many others outraged that Robinson’s name would come up, again, as a potential Hall of Famer. Anderson told me earlier this week: “For the nomination committee to endorse a cheat to our most coveted shrine makes a mockery of the Hall of Fame itself.”

Of course it does. And the people who nominated Robinson, again, should have known that. And if they didn’t then maybe the time has come to change the nominating system.

Clay Horner, currently WEG chairman, who has been an owner for 35 years, told me this week in his personal capacity that Robinson’s “record of very serious offences over a long period in his personal capacity and the sad record of his sons and other associated trainers makes him completely inappropriate in my view as a Hall of Famer candidate. Indeed, I think he has been the most significant blight on Canadian racing over that period. His obstruction and dirty tricks in investigations and proceedings against him are a low water mark in every respect. It would be a mockery of the worthy members of the Hall of Fame to reward Bill Robinson.”

It’s nothing personal. I have never met Robinson and I don’t wish him ill. I know that there are those in our sport who like him and respect him and clearly want this reward for him. I don’t understand how these folks can feel this way given the record but, sadly, the divide about what is and is not acceptable in harness racing existed long before I came onto the scene and will be around long after I leave it. This is not a call for industry leaders to do anything more to Robinson than to refuse to honor him with induction into their shrine.

I’ve already heard from at least one Hall of Famer who says he won’t attend the ceremony if Robinson gets in. I suspect others will boycott, too. And they should. It’s bad enough that Robinson was nominated last year; this year’s nomination tells us some on the nominating committee are trying to send a message that it wants him in. It’s the wrong message. Just imagine the damage this will do to the credibility of the Hall itself. Actually, we don’t have to imagine. The embarrassment and the shame will belong to all of us. And the many cynics who say we aren’t really serious about cleaning up our sport will have a new symbol to point to as proof. An old symbol, actually.